Hluhluwe-iMfolozi Park (HiP), once a global conservation success story for bringing rhinos back from the brink of extinction in the fifties, is fast becoming a graveyard and failure of epic proportions under the helm of Ezemvelo KZN Wildlife management… writes Jamie Joseph from SavingTheWild.com.

Saving the Wild has been closely monitoring the Zululand park since July last year, and our environmental organisation is a trusted ally to many of the employees inside HiP who feel they are not being supported.

The poaching death toll in the KwaZulu-Natal (KZN) province of South Africa has now surpassed 200 butchered rhinos, and most have been killed inside HiP.

Of the 162 rhinos killed last year in KZN, 118 were poached in HiP, compared with 28 in 2015 – an increase of 320% – and it’s escalating. The new ground zero in these rhino wars, the killing will continue unabated until competent management is at the helm.

Hluhluwe-iMfolozi Park is split up into five sections, each led by a section ranger, and the Masinda section in the south is by far the weakest link. According to Ezemvelo Rhino Security reports, last month at least 12 rhinos were found dead in the Masinda section, with carcasses six months and even older.

Devastated rangers working at Hluhluwe-iMfolozi Park have told me in the strictest confidence that rangers in the Masinda section have seen poachers stalking rhinos, and they were told to stand down. Right before their eyes, they have seen rhinos shot dead, and they did not react.

This has been going on for far too long. More than a year ago, during the August full moon week, HiP lost four rhinos in one night of carnage. According to The Mercury quoting Ezemvelo spokesman Musa Mntambo: “This operation resulted in the arrest of three people with the recovery of three firearms – one home-made gun, one pistol and one .303.” 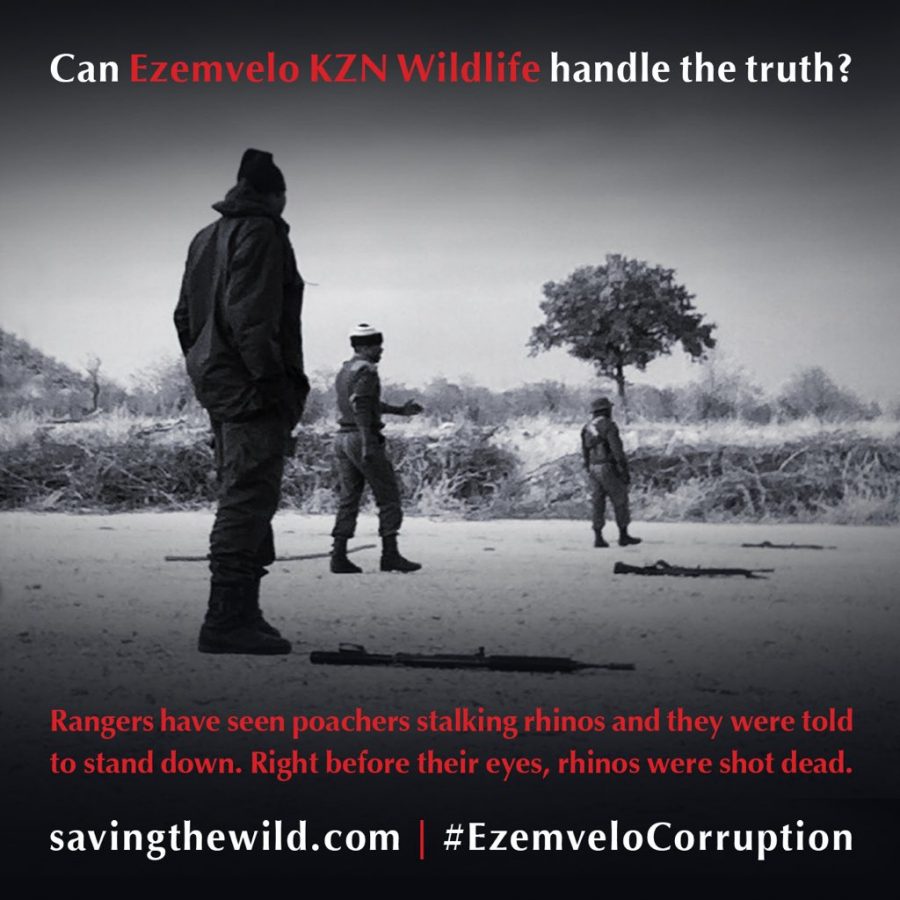 Contradictory to this, police members that attended the scene of the crime reported that four dead rhinos were found suspiciously in the same section.

Poachers used axes, and all four cuts were the same method. Even the bullets were similar, indicating they were the same poachers. It was a .375 – not a 303. It is extremely unlikely that none of the Masinda rangers at the observation point saw or heard anything, as they claimed.

The following month, during the 2016 September World Rhino Day massacre, most of the rhinos were slaughtered in the Masinda section of the park. Poachers were so brazen that they took time to put logs under the heads of the dead and dying animals before they butchered their faces, as if they had all the time in the world, as if they knew no one was going to stop them.

Once nicknamed by his peers, ‘Rhino Cop’, nowadays Ezemvelo’s Hluhluwe-iMfolozi Park Manager Jabulani Ngubane – who doesn’t even live in the park – works under a cloud of suspicion.

Mbuso Ngubane, the half-brother of Jabulani Ngbune, pleaded guilty to conspiracy to hunt rhino after he was arrested in 2014 while transporting poachers to a private Zululand game reserve. (CAS 17/06/14) Magistrate Ngcobo “punished” him with a R35 000 (US$2700) fine in the Mtubatuba court, no jail time. 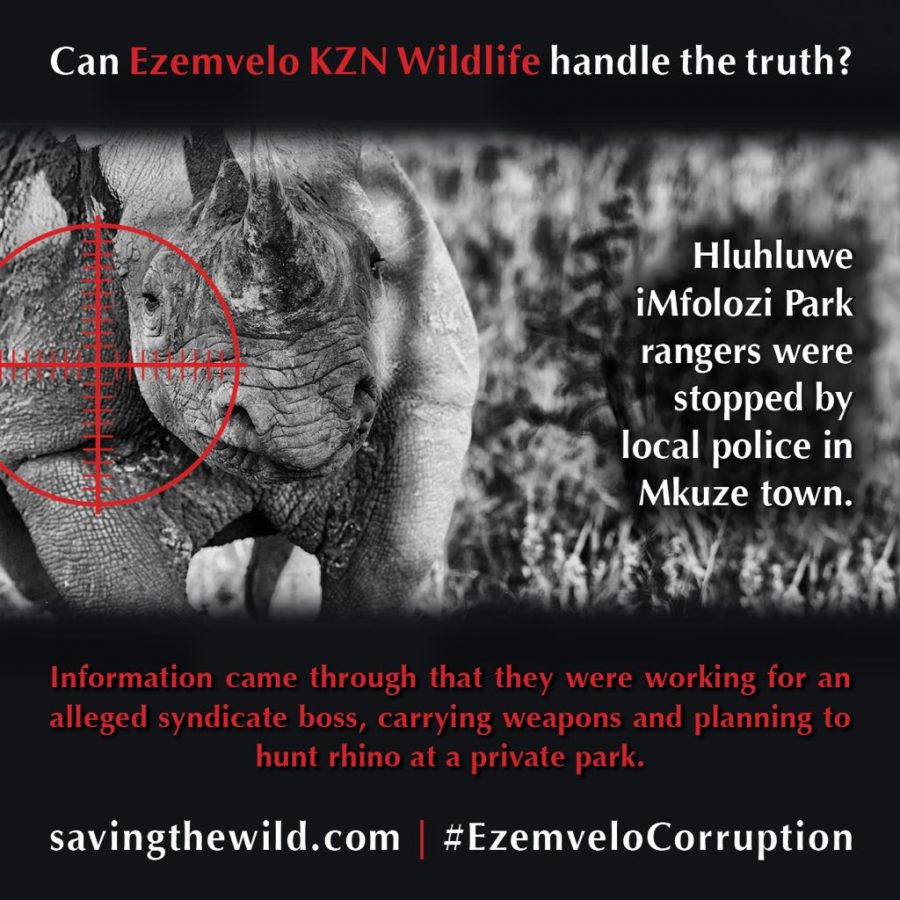 He was represented by Ngwenya, the original defense attorney of the alleged rhino poaching kingpin of Zululand, Dumisani Gwala. Both Ngwenya and Ngcobo are currently under investigation for allegations of corruption.

There are unconfirmed reports (informers that will not go on record for fear of their lives) that Jabulani Ngubane was seen circling the poaching meeting before the hunt began, and was recognisable by the scar on his neck.

Many people at the scene of the crime say Mbuso was unashamedly dropping his brother’s name in order to avoid arrest.

But questionable decisions date back as far as 2010, while Ngubane was still Head of Rhino Security with his sights set on the job of Park Manager. According to information provided by a HiP employee who fears he will lose his job if his identity being revealed:

“In 2010 Jabulani Ngubane gave his field rangers a Powerpoint presentation on a pyramid scheme. Contributions of between R2700 and R21 600 were made by staff. Some staff benefitted from the scheme, others lost all their money. Through the private CC, Mbomvu Consortium, they took some of the money to an agent, and the rest to TWI Express. When some staff lost all their money they approached Ngubane and were threatened by him. Others received money and some were given promotions in lieu.”

Until recently “relocated”, the section ranger of Masinda was Benjamin Myeni, a relative of Jabulani Ngubane, according to many people that worked with him. Others believe he was given that post in lieu of the pyramid scheme loss.

The feeling on the ground, by both rangers and police officers in communication with Saving the Wild, is that the recently “relocated” Masinda section ranger may not have been corrupt, but it is possible he was put there to fail. It makes no sense to his peers that someone with so little experience was given such a senior position.

For example, there have even been scenarios where he ignorantly assumed a rhino died a natural death because the animal was found with a horn, never considering that the rhino was wounded by a bullet, ran away, and died later of injuries.

Ezemvelo works in partnership with Rhino 8 (previously Rhino 7), various stakeholders, including police, based out of Hluhluwe town about 30 minutes from HiP.

According to the previous Rhino 7 police commander Colonel Barnard, who expressed his disillusionment to me regarding the ongoing corruption, “We had an incident in the Masinda block where the rangers heard the shots. They heard the rhino screaming! And then another ranger told them not to react. 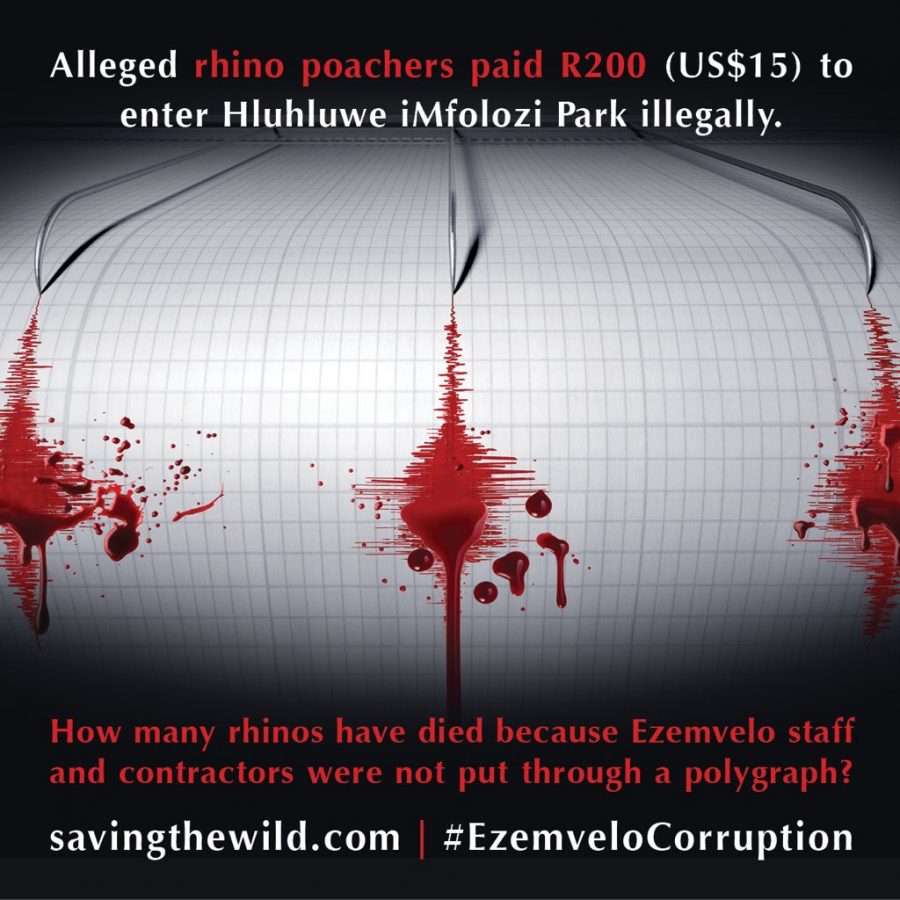 Last year the total loss to KwaZulu-Natal (KZN) private parks was just 7, compared to 155 rhinos killed across state parks. Polygraphing is not the silver bullet, but it is a necessary weapon in the war chest when it comes to protecting South Africa’s natural assets.

A few months ago, Hluhluwe-iMfolozi Park rangers were stopped by local police in Mkuze town. Information came through that they were working for an alleged syndicate boss known as “Mr Big”, carrying weapons and planning to hunt rhino at a private park. The informer said there was a .375 in the vehicle, and the police were paid off R30 000 to make the weapon disappear. 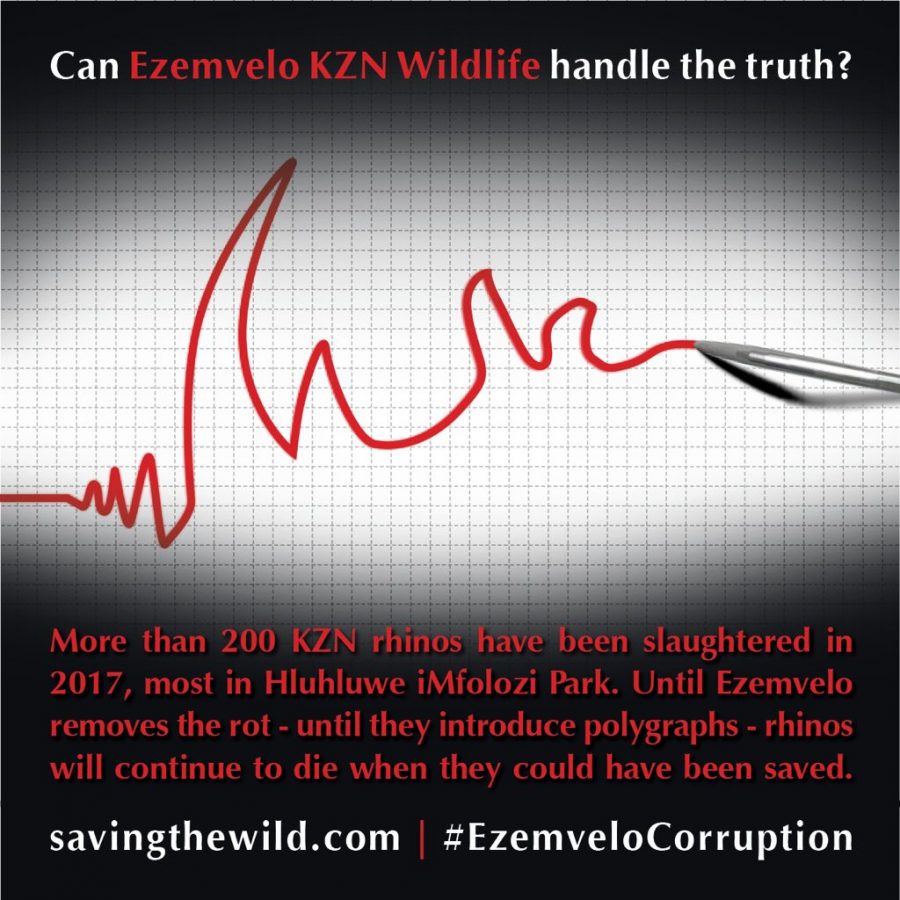 Gate security at HiP is compromised. Visitors get allowed entry if they drop the names of employees working inside the park, and a lot of the time Ezemvelo employee access cards do not work, and so the security just waves them through, whoever they may be.

On Christmas Day alleged rhino poachers from Mpumulanga paid a security woman at the Memorial gate a meagre R200 (US$15) to enter illegally. How many rhinos have died because Ezemvelo staff and contractors were not put through a polygraph? We will never know.

Ezemvelo can blame budget cuts, and then in the next breath claim they are ramping up resources in the fight against poaching. They can give false hope and claim they are making arrests – but arrests mean nothing without convictions – and the conviction rate in KZN state parks is close to zero.

Until Ezemvelo removes the rot – until they introduce polygraphs – rhinos will continue to die when they could have been saved.

And to save ourselves we need to save the rhino. The human element of this war can no longer be ignored. Thousands of employees are counting on tourism and a healthy ecosystem to support their families. But with rhinos fast disappearing, poachers are now turning their attention to elephants.

The domino effect of losing two of the Big 5 because of the horrendous demand for rhino horn and ivory in Asia, and South Africa’s lack of political will to hold the line until the demand is stopped, will ultimately result in a collapse in tourism industries, job losses, poverty and conflict. 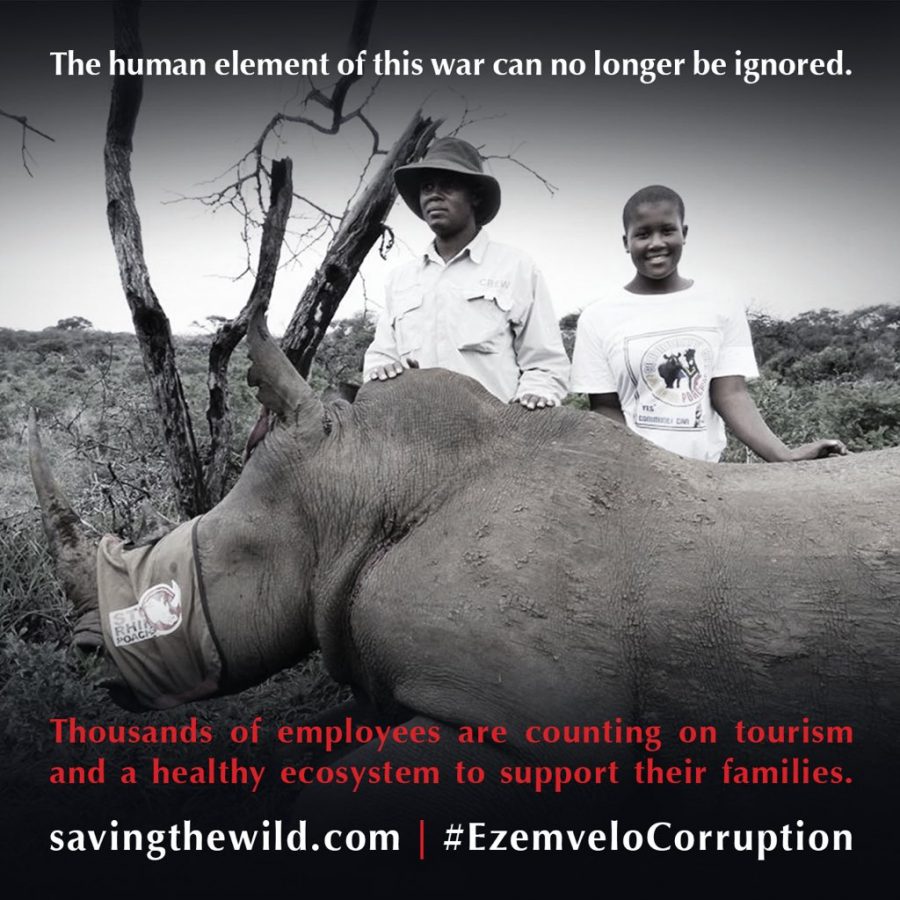 Whether it be corruption, or gross negligence and maladministration, senior management of Hluhluwe-iMfolozi Park is failing spectacularly to protect South Africa’s rhinos.

The writing is on the wall. But can Ezemvelo handle the truth? 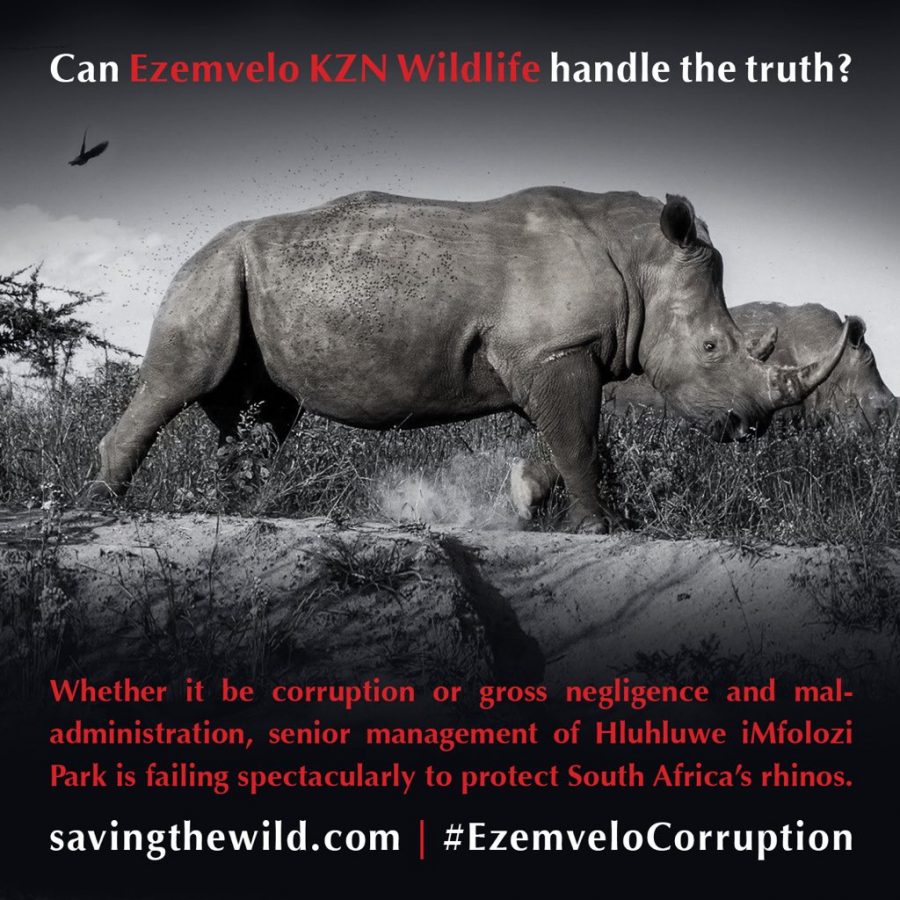 This article is by Jamie Joseph, republished here with her kind permission. The views expressed are her own and do not necessarily represent the views of SAPeople.com.

Please read the original article on SavingTheWild.com and join Jamie in her fight for justice on Saving the Wild Facebook and Twitter.