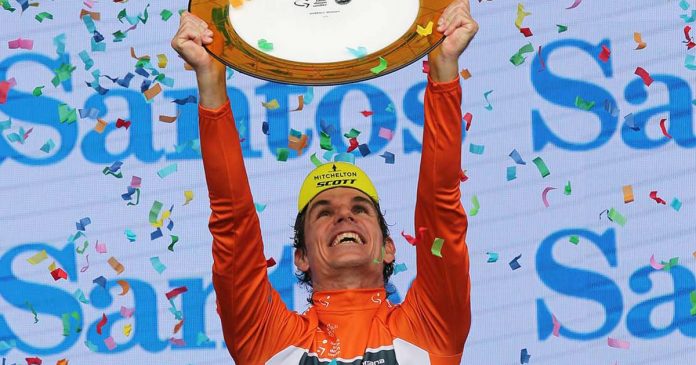 South African professional cyclist Daryl Impey – riding for Team Mitchelton-Scott – has won the 2018 Tour Down Under!

Impey said: “What a crazy and fantastic week for me and MitcheltonSCOTT riders and staff. This will take some time to sink in.”

Impey finished in the same time as another cyclist, but thanks to his three second-place finishes during the race (including the final sixth stage), his points propelled him into winning position.

This is the South African’s first general classification win since 2014, when he won the Tour of Alberta in the Canadian Rockies. Nine years ago he also had a big win at the Tour of Turkey.

The Tour Down Under is the opening World Tour stage race of the season. The 90 km sixth and final stage took part in Adelaide, with cyclists racing 20 laps around the city centre.

It was a great race for South Africans, with Nicholas Dlamini winning King of the Mountain.

Some added muscle 💪💪💪. Australian fans at stage 1 of Tour down Under. pic.twitter.com/CPWmLt9QKD

It all seems impossible until it's done ! What a crazy and fantastic week for me and @MitcheltonSCOTT riders and staff. This will take some time to sink in https://t.co/cruGRfrAZV

On the eve of his big win:

Humbling experience to read the messages of support and congratulations some of you sent. Thank you ! Big day tomorrow

Nicholas Dlamini holds on to KOM jersey for another day at @tourdownunder #4! Richie Porte was first to crest the climb, closing the gap to Nic's KOM's jersey to 16 points. Nic will no doubt be out to defend his jersey tomorrow once again! @TeamDiData pic.twitter.com/fb16EmIMsA