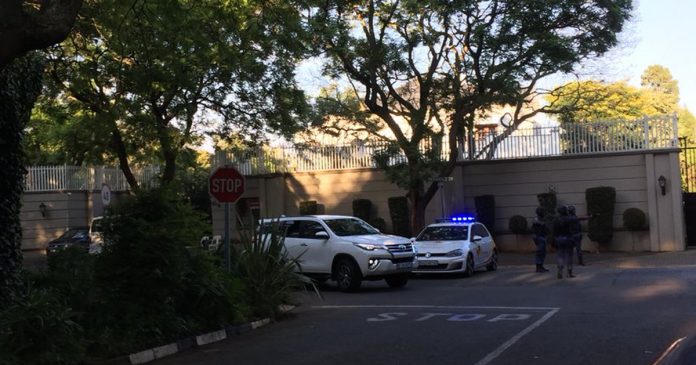 The Hawks have arrested three people for alleged corruption in respect of the Vrede farm investigations, two of whom are allegedly Gupta brothers.

In a statement on Wednesday morning, the Hawks said two other suspects are expected to hand themselves over to police.

“So far, three people have been arrested and two other suspects are expected to hand themselves over to the Hawks. Operations are still ongoing and further details will be made available at a later stage,” the Hawks said.

The specialised crime-fighting unit, however, did not reveal the names of those arrested; but eNCA journalist Karyn Maughan said: “We understand that two #Gupta brothers have been arrested. No official confirmation yet.”

The arrests follow this morning’s swoop on the premises of the controversial Gupta family in Saxonwold, northern Johannesburg.

The Gupta family has been implicated in wide-ranging allegations of corruption, including at Krynaauwslust farm in Vrede in the Free State.

The dairy farm matter is at the centre of the R220 million allegedly paid to the controversial Gupta family and companies linked to their businesses, which was intended for black farmers.

The Hawks last month raided Free State Premier Ace Magashule and the provincial office of the Department of Agriculture in Bloemfontein offices.

Last month, the Bloemfontein High Court granted an order to freeze assets amounting to R220 million of those who have been linked to the probe.

Public Protector Advocate Busisiwe Mkhwebane released a report last month, which highlighted irregularities, gross misconduct and maladministration by the Free State Agriculture Department in its handling of the project.

The Hawks investigation into the farm is ongoing. Hawks officials are currently investigating various premises around Gauteng. – SAnews.gov.za

Well done @MbalulaFikile and the Hawks for arresting Guptas, they have really messed up many innocent comrades. Let them rot in jail

We understand that two #Gupta brothers have been arrested. No official confirmation yet.

[WATCH] The #Gupta home is full of police. The Hawks are raiding. The gates open for a few minutes to give you a glimpse of what's happening inside #sabcnews pic.twitter.com/zoTq7gJtJb

South Africans overseas can watch Carte Blanche’s recent expose of the dairy farm scandal and the inner workings of the Gupta family empire by subscribing to Showmax here.