WINDSOR, England (Reuters) – Britain’s Prince Harry and American actress Meghan Markle were pronounced husband and wife on Saturday by the Archbishop of Canterbury in a glittering union that brought a measure of modern Hollywood glamour into the 1,000-year-old monarchy. (See more photos at end of article.) 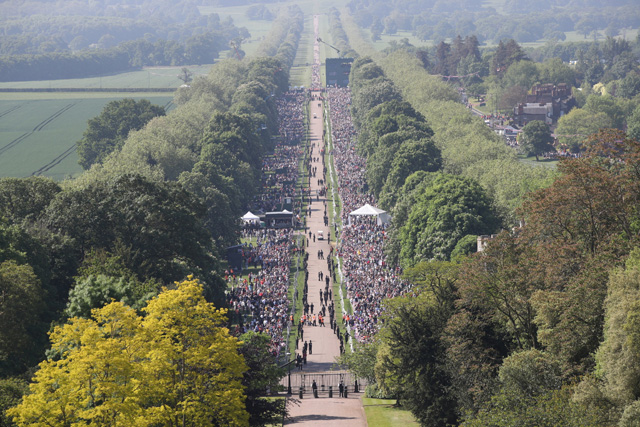 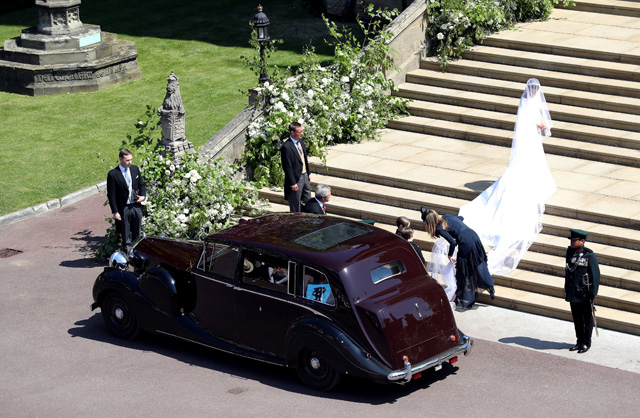 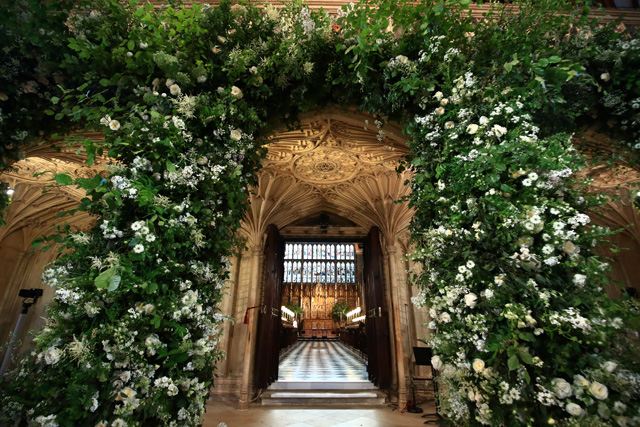 The star of the TV drama “Suits” walked unescorted in a pure white, long-sleeved dress to the middle of the 15th-century St George’s Chapel in Windsor Castle, where the heir to the throne, Prince Charles, accompanied her towards his son, waiting at the altar.

After exchanging vows to love and to cherish “till death us do part”, Harry, 33, sixth-in-line to the British throne, placed a ring of Welsh gold on Markle’s finger before a congregation including Queen Elizabeth, senior royals, and celebrities including U.S. media mogul Oprah Winfrey.

“In the presence of God, and before this congregation, Harry and Meghan have given their consent and made their marriage vows to each other,” Archbishop of Canterbury Justin Welby intoned.

“They have declared their marriage by the joining of hands and by the giving and receiving of rings. I therefore proclaim that they are husband and wife.”

The marriage brings Markle, three years older than Harry and born and raised in Los Angeles, into one of the world’s grandest royal families, known as “the Firm”.

While the ceremony incorporated the traditions of a monarchy that traces its history back to 1066, Markle brought a sense of modernity.

She did not vow to obey her husband; Harry, unlike other senior male royals, will wear a wedding ring; Markle’s father was unable to attend due to reported heart surgery; and a black U.S. Episcopalian bishop, Michael Bruce Curry, gave an impassioned wedding address on the “feeling-bomb” of love, quoting black U.S. civil rights leader Martin Luther King.

“When love is the way, we actually treat each other like we are actually family,” he said.

Tens of thousands of fans lined the route Markle took towards the castle, waving British flags and cheering as her Rolls-Royce limousine drove past.

Air traffic controllers for the nearby Heathrow Airport, one of the world’s busiest, closed the airspace over Windsor for the 15 minutes before the ceremony.

Hours before, Queen Elizabeth had bestowed the title of Duke of Sussex on her grandson, a step that meant the actress, star of the TV drama “Suits”, became a duchess when she married Harry.

The chapel was adorned with white roses, Diana’s favorite flowers.

“This is a moment when we can all celebrate the rebirth of the royal family,” said Kenny McKinlay, 60, who had come down from Scotland for the wedding. “It’s a time when all the nation can come together rather than being divided. It’s a day when you can be proud to be British.”

The royal couple, who met on a blind date in 2016 and fell in love in a tent under the stars in Botswana, tied the knot in a castle that has been home to 39 English monarchs since 1066.

Tens of thousands of fans crammed the narrow roads of Windsor, about 20 miles (30 km) west of London. Visitors had to pass through police search points set up around the castle.

To some Britons, the wedding of a senior member of the royal family to a divorcee whose mother is African-American and father is white embodied a modern Britain where race or background are no bar to even the most elite and traditional of institutions.

To others, it was an irrelevance or mild distraction from the schism of Brexit, which has deeply divided the United Kingdom; polls suggest that most Britons will not bother tuning in.

Markle’s own father Thomas Markle, 73, a former lighting director for TV soaps and sitcoms, pulled out of the ceremony this week, telling the U.S. celebrity website TMZ he had had heart surgery on Wednesday.

Confusion over his attendance marred the build-up to the wedding, which had been choreographed for months by royal aides, and his name still appears in the order of service.

The service was conducted by the Dean of Windsor with Justin Welby, Archbishop of Canterbury and spiritual head of the Anglican Church, overseeing the exchange of vows.

Prime Minister Theresa May, who along with other politicians was not invited to the wedding, sent good wishes to the couple, adding: “To all of those joining the national celebration with street parties and other events, have a wonderful day.”

After the ceremony, the newlyweds are expected to greet some of the 1,200 members of the public invited into the castle grounds before starting a carriage procession through Windsor.

A reception will be held in the castle’s St George’s Hall before 200 guests join the couple at an evening event at the nearby Frogmore House mansion.

Harry and Meghan will carry out their first official engagement as husband and wife next week.

The British remain broadly supportive of the monarchy, albeit with a sense of mild irony about the pomp and pageantry that accompanies it, though most have deep respect for Queen Elizabeth after her 66 years of service as head of state.

Harry, along with brother William and his wife Kate, are at the forefront of efforts to modernize the monarchy by talking openly about their feelings.

“It is patently obvious – the more you say, the more you can be examined,” said royal historian Hugo Vickers. “Everything moves on gradually – but there are certain risks, and there is a lot to be said for maintaining the mystique.”

An update on the #RoyalWedding: pic.twitter.com/wfJ6ZFyzHi

Going to bed now and thinking a lot about the strange surreal and wonderful day my friend Meghan is going to have tomorrow. Meghan – wherever you are – we are so grateful to be here to watch you both take this monumental step together. Love deeply and live well. #RoyalWedding

SO much representation – and in ways and spaces black people are rarely seen. No words. #RoyalWedding

Prince Harry sweetly removes the veil of his bride at the #RoyalWedding. ❤️ pic.twitter.com/Ji6XaYtg1u

#HarryandMeghan have said their vows. The new Duke and Duchess of Sussex leave the front of the church to sign the marriage register #royalwedding pic.twitter.com/gyxGYLD7sz

The Royal Wedding jokes and memes