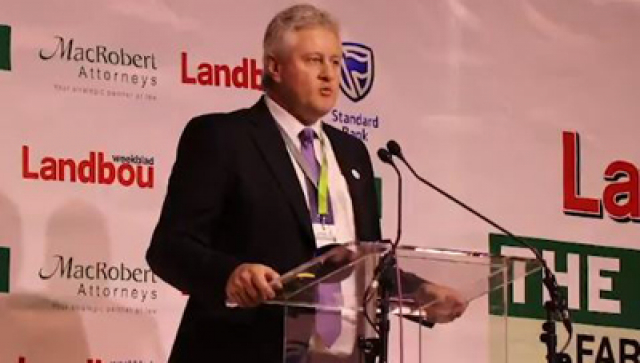 Agri SA announced on Thursday that organised agriculture will soon sign a declaration of intent on land reform in South Africa, which will help government to transform the sector.

AgriSA President Dan Kriek said: “We are extending a hand of friendship… here to government, in saying we want to partner with you. We want to collaborate and take this country forward.”

We want to collaborate and take this country forward

Kriek was speaking at the Landbou Weekblad and Agri-SA Land and Agricultural Summit currently underway in Bela Bela, which was addressed by Deputy President David Mabuza.

The Summit comes following the 27 February 2018 motion adopted by the National Assembly to amend the Constitution so as to allow for the expropriation of land in South Africa without compensation.

“Deputy President we will provide you with a plan that can assist in kick-starting the economy and doing the transformation,” said Kriek.

“Deputy President we will provide you with a plan that can assist in kick-starting the economy and doing the transformation,” said Kriek.

Deliberations on the public hearings and written inputs are set to occur between 4 and 7 September 2018, with the adoption of the report expected on 11 September 2018, where the Committee will make a recommendation to both Houses of Parliament for approval.

This as government has stated that the Constitution has not been amended and the current legislative framework still applies. Government said while the Parliamentary process unfolds it will continue to advance land reform through existing programmes of land restitution, land redistribution and land tenure reform using the existing constitutional provisions.

“We need black farmers on more black farms and we can do that in a responsible way and in a legal way, in a developmental way, without scaring people,” said Kriek.

This as the Deputy President in his address said the land reform processes that South Africa is undertaking poses no threat to the agriculture sector and the South African economy.

Referring to President Donald Trump’s tweet about “farm seizures”, Mabuza also said: “We would like to discourage those who are using this sensitive and emotive issue of land to divide us as South Africans by distorting our land reform measures to the international community, and spreading falsehoods that our ‘white farmers’ are facing the onslaught from their own government. This is far from the truth.”

Government also stressed that it is committed to a fair and sustainable land restitution and redistribution process, adding that all will be done to safeguard the estimated R460 billion worth of investment in agricultural assets.

The Summit which has a total of 65 speakers will conclude on Friday.