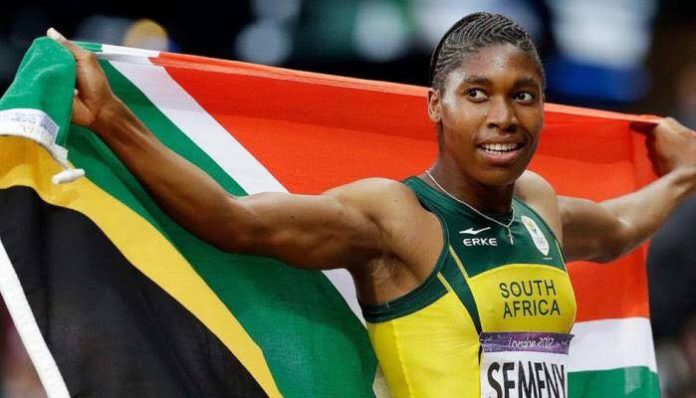 The South African government has launched the #NaturallySuperior campaign which aims to rally behind golden girl Caster Semenya.

The campaign will target various eminent people, sectors of the local and global community as well as human rights organisations to join in condemning and opposing International Association of Athletics Federations (IAAF) regulations.

Its mandate, according to Sport and Recreation Minister Thokozile Xasa, is to raise public awareness and mobilise public support on the discriminatory nature of these regulations which she labelled as a gross violation of human rights.

Xasa told a media briefing in Pretoria on Friday:

“[With] this mobilisation campaign #NaturallySuperior – we honour and declare the greatness of women. We pronounce that women have the freedom to be women in our sporting society. Let women have the right to participate in this society’s sporting platforms which does not judge their gender and let women’s sporting performance and resultant greatness not be questioned nor doubted,”

The campaign also comes ahead of the Court of Arbitration for Sport (CSA) in Switzerland hearing a matter between IAAF, Athletics South Africa and Caster Semenya.

Government, through the Department of Sport, has established a high-level panel consisting of the medical and legal workstreams who have prepared a formidable case.

The legal team will appear before CAS on Monday to present the case in support of the case lodged by both Athletic South Africa (ASA) and Semenya.

A news report this week claimed, among other things, that IAAF lawyers will argue that the World and Olympic 800m champion should be classified as female but also as a “biological male”.

The IAAF dismissed the media report of classifying any Differences of Sexual Development (DSD) athlete as male, saying it accepts their legal sex without question, and permits them to compete in the female category.

However, the body defended their stance on regulations that separate female classification for an athletes with the hyperandrogenism to participate in the female athletics categories and the conditions under which they would be allowed to compete.

The IAAF regulations mean that such athletes, including Semenya, will have to reduce and then maintain their testosterone levels to no greater than five-nanomoles of testosterone per litre of blood (5nmol/L) by 1 November 2018 if they want to compete in events ranging from 400 meters to a mile.

Semenya is challenging the IAAF rule but the international regulation body believes its new rules will preserve fair and meaningful competition in the female classification.

It believed that female athletes with high testosterone have an advantage of up to 9% over women with normal levels of testosterone.

IAAF said in a statement this week: “If DSD athlete has testes and male levels of testosterone, they get the same increases in bone and muscle size and strength and increases in haemoglobin that a male gets when they go through puberty, which is what gives men such a performance advantage over women.

“Therefore, to preserve fair competition in the female category, it is necessary to require DSD athletes to reduce their testosterone down to female levels before they compete at international level.”

Government and Semenya’s lawyers contend that the regulations – which have also drawn criticism from human rights, medical science, sport and sports law organisations both here at home and abroad – are objectionable on numerous grounds.

These include compelling women with no prior health complaints to undergo medical interventions to lower their testosterone levels.

Semenya is unquestionably a woman and she asks that she be respected and treated as any other athlete. Her genetic gift should be celebrated, not discriminated against, Xasa said.

According to the Minister:

“What’s at stake here is far more than the right to participate in a sport. Women’s bodies, their wellbeing, their ability to earn a livelihood, their very identity, their privacy and sense of safety and belonging in the world, are being questioned.

“This is a gross violation of internationally accepted standards of human rights law,”

Her lawyers – global law firm Norton Rose Fulbright – on Thursday said Semenya respects the rights and interests of transgender athletes around the world.

“Her case, however, is about the rights of women who are born as women, reared and socialised as women, who have been legally recognised as women for their entire lives, who have always competed in athletics as women, and who should be permitted to compete in the female category without discrimination,” the lawyers said.

The firm said they are looking forward to responding to the IAAF at the upcoming CAS hearing.

The arbitration proceedings before the Court of Arbitration for Sport will be confidential and Semenya is not permitted to discuss the case publicly.

This includes referring to any submission or position that may or may not have been taken by any party within the confidential proceeding.