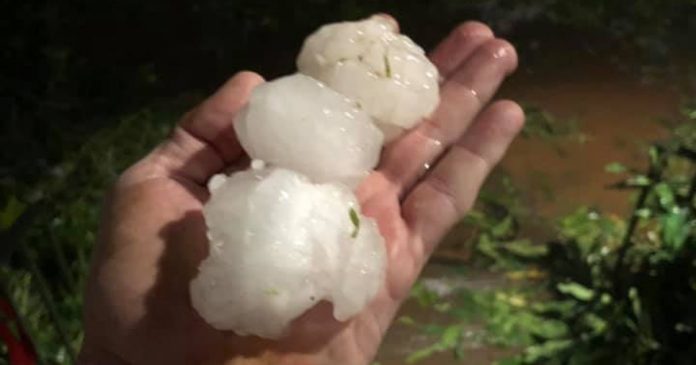 Over 1,000 falcon birds are reported to have been injured or died overnight after a massive hail storm swept suddenly into Newcastle in South Africa, wreaking havoc in the space of just 15 minutes (see photos below). Fortunately for the quick thinking of local caring residents, more of the birds – which have migrated to SA from the Amur River bordering Russia and China – didn’t die and will be rehabilitated.

Residents of the KwaZulu-Natal town awoke this morning to destruction with car windows smashed and shattered by the hailstones which were the size of golfballs (some said there were even bigger pieces, the size of tennis balls). Many roofs were destroyed, and rainwater flooded into homes. Even some pets sadly died.

One resident, Wisey de la Dàvila told Storm Report SA: “Possibly the worst hail storm I’ve experienced in my 5 years of living in Newcastle, I thought that the house was gonna break down…. It was damn scary. The sound of the Hail and thunder claps, the deluge, the wind, absolutely deafening, I jumped out of bed and sat on the floor. 😭😭😭😭😭😭”

Another resident said: “Newcastle is a disaster area right now. A 15 min hailstorm even broke our kitchen window.”

Tragedy at the Amur Falcon Roost

Tragically at the Amur falcon roost in the middle of Newcastle, at the Farmer’s Hall, over 1,000 falcons were left injured and dead, according to resident Angus Burns. But more could’ve died if it weren’t for the quick thinking action and care of local residents like Angus.

Angus, who said it was the most devastating hail storm he’d seen in his life, was the first to realise the falcon roost was damaged.

He immediately called local wildlife rehabilitation expert Sylva Francis, at 22h00 on Thursday evening, to meet him at the roost. Writing on Facebook after midnight, Angus said:

When we arrived there the devastation was horrible – dead, dying, injured and concussed falcons lying everywhere. We started calling friends and colleagues who rallied to assist – amazing support from 911, SPCA, Johan Pieters, Heather Gero  Dale Schnuir, Johan Swart and family, Angelique Campher and so many others who came and collected the injured falcons.

We all worked until after 1am to get them to Silva’s house and (Friday) will be the next stage to get those that need further help to rehab facilities.

Angus expressed his sympathies for those who suffered in the storm and added: “My sincere thanks to all who helped the little creatures that couldn’t speak for themselves but desperately needed help this evening…”

A fortnight ago another Amur falcon roost was hit by hail in Mooi River, with over 700 dying.

FreeMe Wildlife KZN Rehabilitation Centre, who helped in that disaster, said today: “Just as we thought the worst was over, this desperate plea came through in the early hours of this morning…😟😟” They posted a video of the battered birds, with Sylva Francis’ desperate plea: “We need help.”

FreeMe has sent two teams to Newcastle. For some birds, it’s just a boost of rehydration that’s needed “after the shock and trauma these little birds have endured.”

FreeMe said: “The rehab team are now flat out, and the last report numbered 50 falcons so far recovered and released 😁👏👏”

FreeMe said: “The team on site has done a fantastic job of rescuing and collecting the falcons. Well done Sylva, Angus, Newcastle SPCA, and the rest of their team 😊🤗❤”

Just as we thought the worst was over, this desperate plea came through in the early hours of this morning…😟😟The Amur Falcon roost in Newcastle was hit by a hail storm last night. The voice you hear is that of Sylva Francis, a wildlife rehabilitator in Newcastle 😞While she and the team on the ground there, including the Newcastle SPCA, attend to the birds on the scene, two teams from FreeMe KZN are on their way to assist ❤️🦸‍♂️We will keep you all updated as we go…

And our team are on site, and the work has begun…😁👨‍⚕️A second team comprising of Wendy White (Bat Specialist turned…