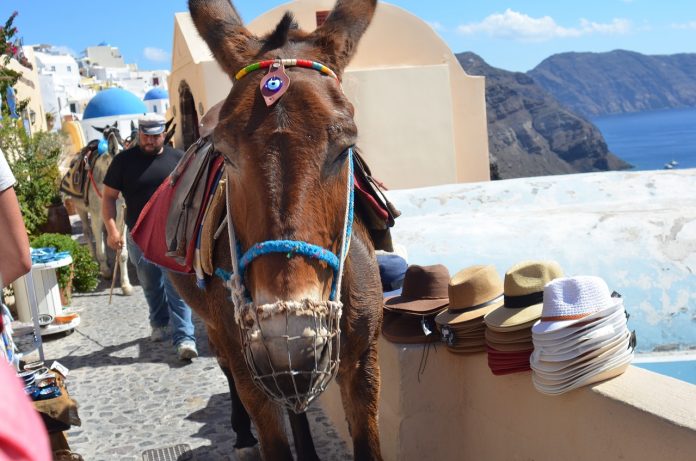 SANTORINI – A South African animal welfare worker documenting the abuse of donkeys on the Greek island of Santorini was brutally assaulted and threatened with death while filming, international charity Network for Animals said in a statement on Tuesday.

Luke Barritt, a campaigner for NFA, and Polish cameraman Wiktor Dobraczynski were seen filming the treatment of donkeys when they were attacked by a group of ten donkey owners, NFA said. They “kicked and struck Barritt, driving him to the cliff edge while threatening to throw him over. Dobrazczynski rescued him but was also attacked in the process.”

Barritt said he reported the incident to local police, but they did nothing.

NFA has been trying to highlight the abuse of donkeys that are made to “repeatedly climb a 1000-foot cliff in baking sun with no food, shade or water.”

The NFA said last year the Greek government and local officials had promised to improve the treatment of donkeys who are used to carry tourists, but the promises had been broken.

There are about 100 donkeys on the island, according to the NFA, and as many as 17,000 tourists disembark each day from giant cruise-ships, at the base of the cliff, and several ride donkeys to the top. Many of the donkeys become so exhausted that they simply stop walking; then the owners thrash them with whips.

“The sheer venom of the donkey owners stunned me,” Barritt said from South Africa, where he is recuperating. “They were kicking me and beating me with the same whips they used on the donkeys. It was a truly frightening experience.”

“The worst thing about this is that I escaped, but there’s no escape for the donkeys,” he said. “They are forced to climb that cliff in baking sun from sunrise to sundown with no food or water in case they soil the cliff path. This cruelty is horrifying.”