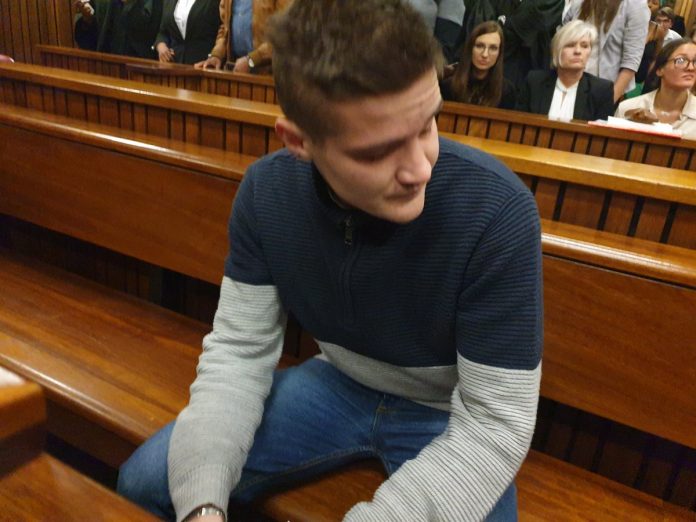 The so-called “Dros rapist”, Nicholas Ninow, has pleaded guilty to, among other things, raping a seven-year-old girl in the bathroom of a Dros restaurant in Pretoria last year.

The 22-year-old also pleaded guilty to two other charges brought against him by the state: possession of drugs, and obstructing the administration of justice. He pleaded not guilty to an assault charge.

The first witness to give evidence today was a waitress from the Silverton restaurant who served Ninow on that fateful day in September 2018.

She testified that Ninow asked for a table for two because he said he was meeting someone. He moved from his initial table to a second one, putting him closer to the children’s play area, she said.

When asked if he could see the children from the second table, she told the court: “Yes you can see clearly inside the play area.”

He later moved to a smoking area which was further from the play area, she said.

The waitress, who asked to be unnamed, said Ninow ordered a Castle draft beer when he arrived at the restaurant, followed by alcoholic shooters, and a second draught after he moved to the second table.

The witness said when she asked Ninow why he changed tables, he said it was to be able to see the person he was meeting coming in.

According to local reports, the witness said she later went to comb her hair in the ladies’ bathroom when the little girl’s mom came in looking for her daughter.

“She asked me if I had not seen the child and I said I did not. She then asked me if there was someone in the toilet cubicle and I said yes,” she testified.

She and the mom knocked on the door, and then with the help of a child minder and two other waitresses tried to open the door, pushing on it and shouting “open, open”.

“We pushed the door harder and it eventually slightly opened. We then saw there was a man inside and that person was the accused,” said the Dros employee.

She said he was topless and had a belt in his hand and “wanted to assault us with it”.

“That’s when the child started screaming for her mother. I went out and screamed that hte doors must be closed,” she said.

The employee said they fled the bathroom because Ninow wanted to hit them with his belt, and that she didn’t actually see the child.

Today, many called for Ninow to receive the “harshest possible sentence”.

Dr. Nomafrench Mbombo – Democratic Alliance Women’s Network (DAWN) Leader – said: “It is now in the hands of the Courts to deal with Ninow to the fullest extent of the law as he deserves the maximum possible punishment for raping a minor.”

The ANC Parliamentary Caucus said in a statement today that it supports President Ramaphosa’s call to review laws on domestic violence and sexual offences.

“With this in mind, the ANC in Parliament will work with other political parties, to expedite the making of laws that will impose harsher sentences for all crimes against women and children.”

The ANC Parliamentary Caucus said it supports calls that additional measures be implemented immediately to halt acts of GBV, these include:

#Dropsrape accused #NicholasNinow ahead of the beginning of his trial at the North Gauteng High Court. EN pic.twitter.com/evJgGEeHcP

#NicholasNinow
BREAKING:
22 year old Nicholas Ninow accused of raping a 7 year old girl inside a restaurant restroom PLEADS GUILTY of 4 charges brought against him by the state. Rape, Possession of drugs, Assault GBH and obstructing the administration of justice @Newzroom405 pic.twitter.com/xz6kCcAhOI