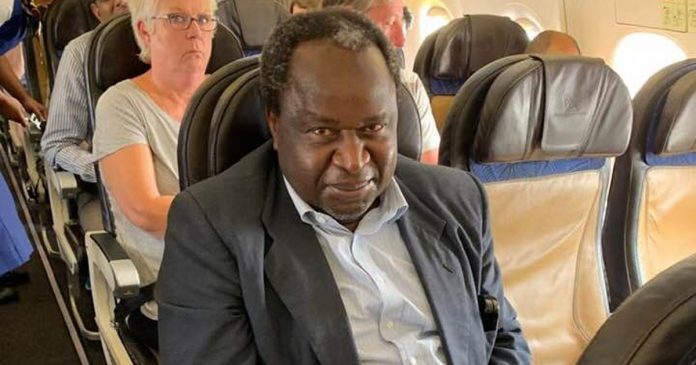 A photo posted yesterday by South African Finance Minister Tito Mboweni has been met with mixed reactions from South African tax payers around the country… and almost everyone noticed the unamused lady sitting behind him!

Mboweni posted a photo of himself in economy class and said: “The RULE IN MY OFFICE: If the flight is less than 2 hours, you fly economy class. Today I was on SA 343 to Cape Town. Seat 14C. Ku rough! The National Breadwinner is serious about cost management.”

Mboweni started his role as Finance Minister with the phrase Ku Rough (“that’s tough”) when he acknowledged the tough task he had ahead of him with the budget speech in February.

While the majority of people welcomed the air travel initiative, many tripped over the “two hours” threshold, suggesting a little longer may be considered more of a sacrifice! “Can we increase to eight hours Minister, in order to make it more rough 😂🤣😂🤣?” asked one.

A few said it was a publicity stunt. “Zuma did it, Ramaphosa did it, we’ve seen this movie before,” wrote one commenter.

But the majority thanked the Minister for “doing the right thing” and leading by positive example. As Sampson Mamphwell said: “I love that rule, you are indeed our bread winner, I am a frequent flyer so I understand the financial implication of that decision. 🙏🙏🙏🙏🙏🙏🙏”

Many hoped that fellow ministers, MECs and mayors will follow. Some even encouraged the Minister to enforce the rule for all.

The most laughs came however from everyone who noticed the “gatvol tannie” sitting, unamused, behind the minister.

The RULE IN MY OFFICE: If the flight is less than 2 hours, you fly economy class. Today I was on SA 343 to Cape Town. Seat 14C. Ku rough! The National Breadwinner is serious about cost management.

A few hours after posting his picture, Mboweni shared an article someone sent him in which it was pointed out that in Sweden politicians (apart from the prime minister) don’t get official cars or drivers, and travel instead in crowded buses and trains all the time. Apparently in Sweden, the ministers who don’t travel economy are the ones who are shamed and make it to the news headlines!