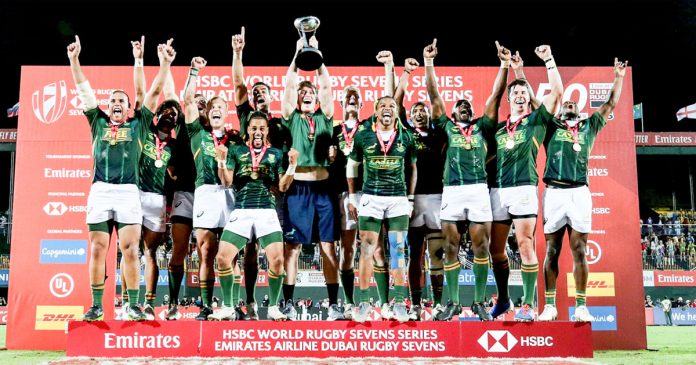 The Springbok Sevens team opened the 2019/2020 World Rugby Sevens Series in perfect fashion by claiming the opening tournament of ten at The Sevens Stadium in Dubai on Saturday.

The Blitzboks outplayed New Zealand 15-0 in a pulsating final of the Dubai Sevens which saw them winning the title for a seventh time.

The Blitzboks held a 5-0 lead at the break after Siviwe Soyizwapi finally managed to break down the New Zealand defence in the final play of the half. Before that, both Chris Dry and Zain Davids came close to getting the first points, with Dry losing the ball over the line and Davids held up after going over.

The second half was more of the same, with both teams attacking to get the crucial try. That belonged to Dry, who found himself on the wing and in open space.

Trailing by ten points and time running out forced New Zealand’s hand and when they spilled the bal, Seabelo Senatla kicked ahead, regathered and scored what proved to be the final nail in NZ’s coffin.

Earlier in the day, the Blitzboks outplayed Samoa by 38-7 in the semifinal.

Earlier, New Zealand beat England 19-12 to make it into the final.