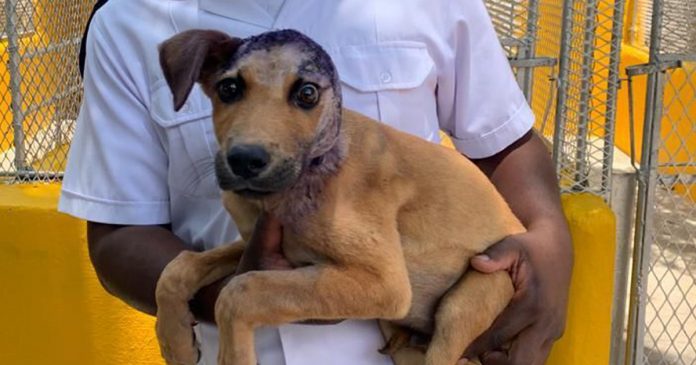 A lovable dog in Bloemfontein has survived a horrific attack, after being held down by three young boys who lit fireworks and exploded them on the dog’s head… blowing off his ear and tearing a hole in his skull. Fortunately there are more kind humans than not, and Brody’s sad story has a happy ending.

Thanks to a brave grandmother who chased the young thugs off, Brody was able to flee from her captors. The grandmother immediately called out animal inspectors.

After being tortured, Brody had run away, yelping in agony… and it took inspectors over three days of searching to find him, but they never gave up.

An officer from the Bloemfontein branch of the Society for the Protection of Cruelty to Animals in South Africa (SPCA) eventually found the terrified dog. He was hiding away, with terrible injuries.

Both of Brody’s deep and very raw firework blast wounds – which can be seen on the harrowing video below – had been infested with maggots and the dog was starved and in extreme pain.

SPCA inspector Tebogo Maswanganye, 35, took over Brody’s care, and a crowd funding plea for assistance raised £600, which covered the cost of the stricken dog’s veterinary fees.

With great care, vet Colleen Gilfillan of the Fichardt Park Animal Clinic, took Brody under her wing and cleaned out the maggots and stitched and treated the horrific firework head wounds.

Tebogo has even now found the stray dog with a missing ear a new home. A local family will take Brody into their home when his recovery is finally complete.

Tebogo said: “A grandmother saw three boys – all aged about 10 – holding the dog down on New Year’s Eve and lighting fireworks, and putting them in the dog’s ear and on his head.

“She tried to stop them but there were two or three big bangs and Brody began screaming and yelping in agony… but the three boys were just laughing.

“The dog ran off into the night and it took three days to find him, and when we did he was cowering down a manhole in real pain, and flies had laid eggs in the wounds so he had maggots. 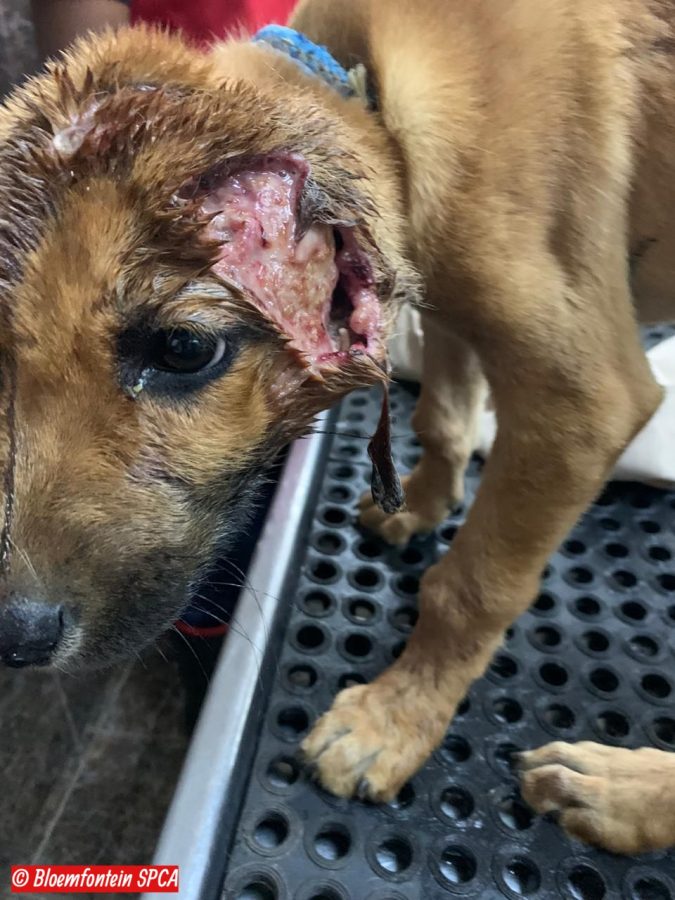 “It took a little while to get his confidence and reassure him that we were not there to hurt him as he was very scared and was suffering, but eventually he allowed us to pick him up.

“The vet did a wonderful job on fixing him up again and the good news is that although Brody lost his ear… he did not lose his hearing, and he is getting used to trusting people again.

“I find it so hard to imagine children can be that cruel to a trusting animal,” said Tebogo.

The good news is that Brody has had many offers of a new home, and Tebogo said they had carried out a home visit to a local family which passed all their requirements, so he will be their new pet for life.

Tebogo added: “Brody had a very hard start in life but this is one story which has a very happy ending. He now has a forever home and will be loved and happy for the rest of his life.”