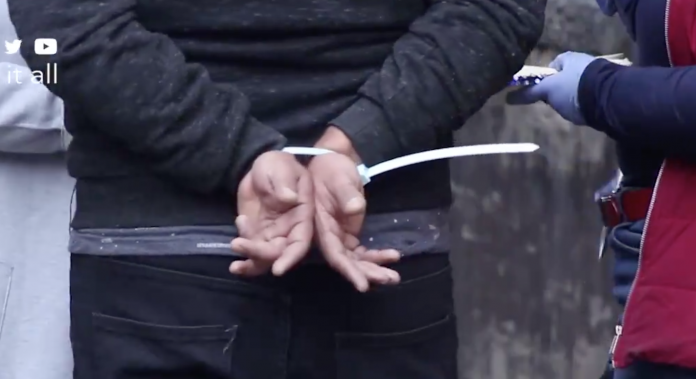 Thousands of South Africans arrested for minor infringements of lockdown rules, and forced to pay admission of guilt fines (to stay out of jail), have now earned themselves criminal records.

According to current affairs show, Carte Blanche, these people were going about lawful essential tasks of buying food, prepaid electricity and fetching their children.

They were arrested on “trumped-up misdemeanour charges during the COVID-19 #lockdown”.

On Sunday the show investigates: what are the implications of being made to pay an admission of guilt fine and saddled with a criminal record?

“He was a family man, a devoted father of three who was attacked, allegedly by members of the South African National Defence Force, in his home in Alexandra township – just two weeks into lockdown. He later died from his injuries,” says Carte Blanche.

In a scathing judgment, the Pretoria High Court ordered authorities to enact new regulations to prevent police and army brutality during the lockdown that’s intended to curb the spread of COVID-19.

“Even the United Nations has slammed heavy-handed police action in South Africa calling it ‘one of the worst’ during the global pandemic,” says the show.

Presenter Macfarlane Moleli says: “The relationship between law enforcement and the public has been tested during this lockdown. As reports of alleged police brutality have come to light, one cannot help but wonder whether people will lose faith in law enforcement authorities.”

Arrested on trumped-up misdemeanour charges during the COVID-19 #lockdown – what are the implications of being made to pay an admission of guilt fine and saddled with a criminal record? @macmoleli finds out more Sunday on #CarteBlanche @MNet channel 101. #day63oflockdown pic.twitter.com/DiwgNhOJYv

When a global pandemic strikes, you might be relieved to know that your monthly business interruption insurance premiums are up-to-date. But imagine that as a national lockdown forces you to close your doors, your insurance company leaves you in limbo. This is the nightmare facing hundreds of businesses in South Africa, especially those in the tourism and hospitality industry. Facing months without income, owners were banking on their insurance to bail them out. But some insurers are citing granular details in the fine print and business owners are desperate. Carte Blanche investigates. (Producer: Graham Coetzer | Presenter: Derek Watts | Research: Laura Byrne)

A global pandemic… it’s a nightmare for restaurants and hotels forced to close their doors. But with so many businesses claiming on their insurance around the world, will these companies pay out? Join #CarteBlanche this Sunday at 7pm on @MNet channel 101. #day62oflockdown pic.twitter.com/715zNJGv62

Eskom CEO Andre de Ruyter has spent lockdown dealing with an Eskom in intensive care – a debt of R450-billion, dilapidated power stations; design flaws at Medupi and Kusile; and a utility still reeling from corruption. As most South Africans head back to their workplaces, will Eskom be able to keep the lights on this winter? De Ruyter sits down with Masa Kekana for a frank discussion on cleaning up corruption, fixing Medupi and Kusile and charting a way forward. (Producer: Joy Summers | Presenter: Masa Kekana)

#Eskom CEO Andre de Ruyter sits down with Masa Kekana to discuss the design flaws on #Medupi and #Kusile, what to do with the R450-billion debt and whether the power utility can still keep the lights on in winter. That's #CarteBlanche this Sunday at 7pm on @MNet channel 101. pic.twitter.com/ASDkGlVHLu

Spying on the Scammers

It’s a global crime that targets the gullible and technologically naïve – online scamsters ensconced in anonymous call centres prey on well-meaning customers, who phone them in desperation for technical advice. Conniving to part them with their hard-earned cash, these criminal call-centres are notorious in India and police face an uphill battle to combat the scourge at its source. Now, exclusively on Carte Blanche, the BBC Panorama’s investigations team turns the tables on the scammers. Showing footage hacked by an online vigilante, from inside call centres, reporters prove that staff conned customers out of thousands to fix non-existent computer problems, and they reveal the high-powered brains behind the business. (Producer: BBC Panorama)