This is one of the most iconic images in sporting history. It was shot by John Dominis, for Life magazine, during the medal ceremony for the men’s 200-metre sprint, at the Summer Olympics in Mexico City in October 1968… writes South African journalist and scriptwriter Gus Silber. 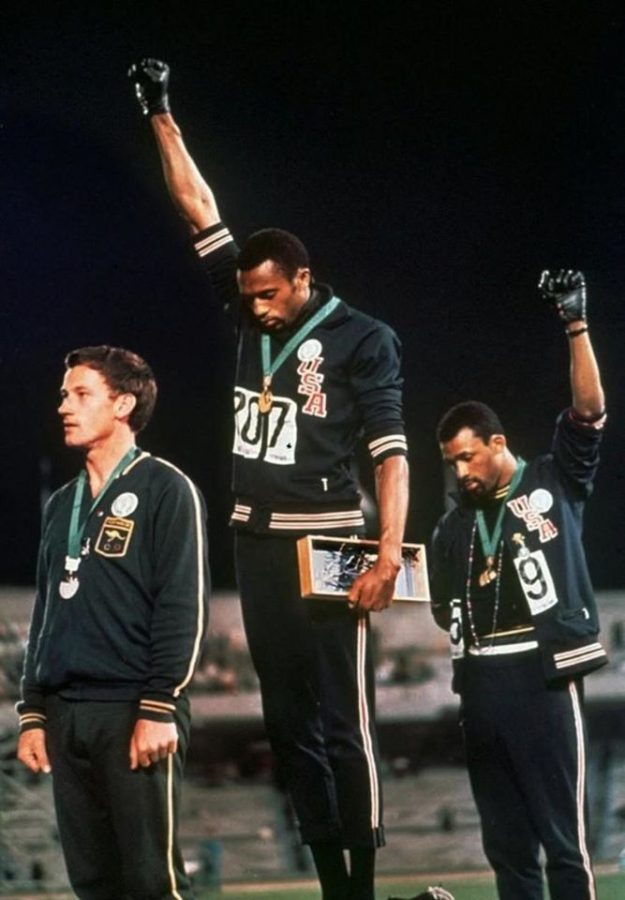 In the middle, wearing the gold, is Tommie Smith of the USA, with a world-beating time of 19.83 seconds. On the right, with the bronze, is his team-mate, John Carlos.

The third man in the picture, wearing the silver, is Peter Norman of Australia. A mere quarter of a second separates the fastest of the three from the slowest.

But in this moment, frozen in time, they stand as one. As the Star-Spangled Banner plays, evoking the red glare of rockets and the bursting of bombs in the air, Smith and Carlos raise their arms in a Black Power salute.

Each man wears a back glove, one of a shared pair, Carlos having left his behind in the Olympic Village. They wear no shoes, in a gesture meant to convey solidarity with the poor and the downtrodden back home.

Tempering defiance with humility, their eyes are downcast, in the manner of soldiers standing vigil at a tomb. Smith, too, seems to echo the pose of the Statue of Liberty, stone tablet in one hand, blazing torch held aloft in the other.

It is 1968, a year of rage and flame on the streets of America.
The Reverend Dr Martin Luther King has been gunned down by a sniper while standing on the balcony of a motel in Memphis, Tennessee.

It is an election year, and within a few weeks, the Democratic Presidential candidate, Robert F Kennedy, will lie mortally wounded on the floor of a hotel in Los Angeles, a set of rosary beads in his hand.

In Chicago, police clash with demonstrators and rough up reporters as the National Democratic Convention comes to town. Across the nation, marches turn to uprising, and uprisings turn to riots.

In Washington, President Lyndon B Johnson orders the mobilisation of the Army and the National Guard.

In Vietnam, it is the bloodiest year of the war, the year of the Tet Offensive, the campaign that would finally turn the tide against the might of the American military.
At home, compounding the agony, an invisible invader breaches the Californian shore and works its way inland.
It is a strain of the H3N2 influenza virus, originating in Hong Kong and spreading around the world.

The pandemic will eventually claim the lives of more than 100,000 in America alone. (The Hong Kong flu pandemic in 1968 and 1969 killed an estimated one to four million people globally, according to Britannica.)

As the cities burn, as the protests rage, as legislators meet with Civil Rights activists to push new programmes and chart new laws, the notoriously plain-spoken President Johnson tells an aide: “What did you expect? I don’t know why we’re so surprised. When you put your foot on a man’s neck and hold him down for three hundred years, and then you let him up, what’s he going to do? He’s going to knock your block off.”

And in Mexico City, as the anthem plays on, two men stand on a podium with their fists in the air, reminding us even today that history is an echo, that it doesn’t just repeat itself, generation after generation; it re-ignites.

Charles Ancer added to this post: “Interesting to note that Peter Norman wore a badge on the podium in support of the Olympic Project for Human Rights (OPHR). After the final, Carlos and Smith had told Norman what they were planning to do during the ceremony. As journalist Martin Flanagan wrote: “They asked Norman if he believed in human rights. He said he did. They asked him if he believed in God. Norman, who came from a Salvation Army background, said he believed strongly in God. We knew that what we were going to do was far greater than any athletic feat. He said, ‘I’ll stand with you’. Carlos said he expected to see fear in Norman’s eyes. He didn’t; ‘I saw love.'”

“On the way to the medal ceremony, Norman saw the OPHR badge being worn by Paul Hoffman, a member of the US rowing team, and asked him if he could wear it. It was Norman who suggested that Smith and Carlos share the black gloves used in their salute. (Wikipedia).

“The Australian parliament passed a motion apologizing to Norman posthumously for the poor treatment he received in Australia after his act of solidarity with Smith and Carlos.”

Gus Silber also added: “Yes, his story is astonishing. He was left out of the squad for the 1972 Olympics, even though he qualified 13 times over. He stayed friends with Smith and Carlos for life. When he died in 2006, they were both pallbearers at his funeral.”