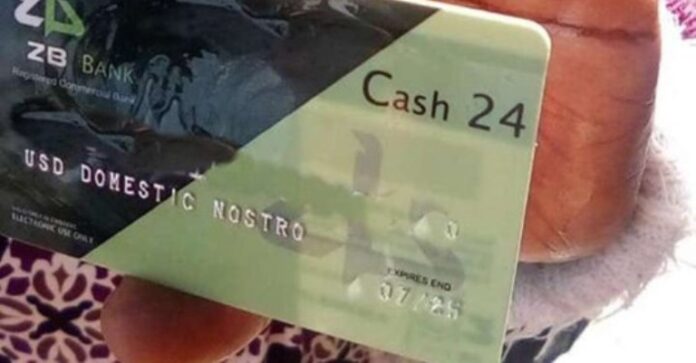 Dear Family and Friends writes Cathy Buckle from Zimbabwe. I write this letter from a bitterly cold Zimbabwe where tension is high and people are anxious.

There are 300,000 civil servants in Zimbabwe. A month ago they were promised a “cushioning” allowance of US$75 a month for the next three months and pensioners would get an allowance of US$30 a month. For weeks there was much discussion about what sounded like a pie in the sky promise. Each of 300,000 people to get US$75 cash when the government is broke and eight and half million people need food aid to survive? Where on earth was government going to suddenly get all this money, approximately 20 million US dollars a month? No one knew the answer and so we watched and waited.

Next came the news that to get the US$75 cushioning allowance civil servants and pensioners had to open Nostro accounts where the government would deposit the US dollars for them. Nostro accounts are those which contain money that originated from a foreign country (US Dollars mostly). The excited chatter sunk to a low rumble because it has become increasingly difficult for people to get their foreign money out of Nostro accounts because the banks don’t have enough of the physical hard foreign currency to dispense. Hopes that civil servants and pensioners had of actually getting US$75 crisp bank notes in their hands faded fast.

Then came the inevitable news that there would not be any cash withdrawals from the Nostro accounts and that civil servants had to get a USD DOMESTIC NOSTRO debit card. A what? We asked. How can you have a domestic foreign currency account? Don’t the two terms domestic and foreign currency directly contradict each other? Apparently not in Zimbabwe. Suddenly banks have to provide 300,000 new USD DOMESTIC NOSTRO debit cards. The materials to make debit cards are imported and there’s limited funding for the imports so suddenly there’s a huge backlog.

Civil servants started trying to get their US$75 “cushioning allowance” out of their brand new USD DOMESTIC NOSTRO accounts but failed dismally. The president of the Bankers Association said there was a shortage of bank/debit cards and that banks were: “under strict instructions” from Treasury not to disburse the US$75 as cash.” (Newsday) Civil servants are supposed to use their DOMESTIC NOSTRO debit cards to pay for goods in shops using the bank exchange rate which is presently 72 Zimbabwe dollars to one US dollar. On the street the exchange rate is around 100 Zimbabwe dollars to one US dollar.

So if you use your US$75 debit card in a shop you’ll get Z$5400 worth of goods but if you had the US$75 in cash and changed it on the open market you could get Z$7500. With a difference of two thousand dollars it’s obvious that civil servants who are barely surviving would want the best possible value for their US$75 cushioning allowance but all hopes of that have now gone. This week the Minister of Finance told the Senate: “we do not want individuals to withdraw cash from banks… because we are concerned as a government that it will end up in the parallel market.”

And so that’s that but no one’s adding the little PS to the story which is the bank charges for having a Nostro account, the charges for issuing a new debit card, the charges every time you put your debit card into a swipe machine at the till. How much of the US$75 will be left we wonder? At best the cushion was little more than a feather on the mattress in the first place, only worth half a night in hospital, half a consultation with a specialist doctor, half an X-ray, half a filling at the dentist.

While all this has been unravelling, award-winning journalist Hopewell Chin’ono who has been doggedly exposing high-level corruption in Zimbabwe was arrested and charged with “incitement to participate in public violence.” Recently Hopewell exposed the shocking corruption connected with Covid-19 supplies which left the Minister of Health removed from office. As I write, news has just come in that Hopewell Chin’ono’s bail application has been refused and he has been remanded in custody until August 7. Also arrested and remanded in custody with the same charges is opposition politician Jacob Ngarivhume who had called for a protest march on the 31st July.

Meanwhile, Zimbabwe has now been placed under a dusk to dawn curfew and soldiers are on our streets with truncheons and sticks chasing people away from central areas enforcing a tightened Covid-19 lockdown although why sticks and beatings are needed is simply a big unknown, the answer as elusive as the US Dollar DOMESTIC NOSTRO money that isn’t there to withdraw.

Until next time, please keep our journalists whose bravery gives hope, in your thoughts and hearts. Thanks for reading this Letter From Zimbabwe, now in its 20th year, and my books about life in Zimbabwe, a country in waiting,
love Cathy 24th July 2020.
Copyright © Cathy Buckle. http://cathybuckle.co.zw/

For information on Cathy’s books about Zimbabwe go to: www.lulu.com/spotlight/CathyBuckle2018  For archives of Letters From Zimbabwe, to see pictures that accompany these articles and to subscribe/unsubscribe or to contact Cathy please visit her website http://cathybuckle.co.zw/ For book orders exclusively in South Africa, go to http://burbleonline.co.za/c/272