The beautiful island of Mauritius, popular holiday destination to many South Africans, is currently under threat following a devastating oil spill at the end of last month. At first Mauritians were told their beautiful island was not at risk… but in the last few days the true magnitude of the disaster has come to light, and a popular French journalist is now doing his utmost to raise awareness and funds to aid the volunteers who are desperately trying to minimise the damage.

Journalist and well known activist Hugo Clément yesterday launched a fundraiser which has already raised over €40,000 of its €50,000 target in just 24 hours.

Hugo said he was launching the fundraiser to help volunteers with protective equipment (masks, gloves, boots etc) and hydrocarbon control equipment (bags, shovels etc.). All funds raised are being donated to the Mauritian association Eco Sud, which managing the volunteers as they fight to preserve Mauritius’ fragile and precious ecosystems. Hugo says even 5 euros can help, just to participate in helping. “And if you can’t, feel free to share. 🙏” he says.

Hugo concedes that “in the end, it is the officials who will have to pay for the damage. But, in the meantime, something needs to be done to help those fighting on the spot.”

The catastrophe occurred on 26 July, when a Japanese bulk carrier, MV Wakashio – flying the flag of Panama – washed up on a reef in Mauritius. It was carrying 200 tons of diesel and 3800 tons of fuel oil. The accident occurred near famous Pointe d’Esny lagoon and Blue Bay National Marine Park. According to Huge, a crack in the hull is now allowing large amounts of hydrocarbons to pour into the lagoon, and a video he posted (see below) shows how it is touching the coast of Mauritius and swamping the mangroves.

Initially – for at least 12 days – Mauritius government authorities had played down the risks of an oil tide, but three days ago finally acknowledged the extent of the disaster and Mauritian Prime Minister Pravind Jugnauth called for aid from France, confirming “the shipwreck of Wakashio represents a danger to Mauritius. Our country does not have the skills and expertise in replenishing stranded ships”.

Hugo said in a shocked post a couple of days ago that it’s beyond comprehension why Mauritius waited almost two weeks to recognise the magnitude of the disaster and call for help. French President Emmanuel Macron has announced that France is sending teams to help and equipment from Reunion Island. Residents of Mauritius are apparently working together, showing “great solidarity” to help protect their island as much as possible from the devastating damage.

If you would like to help the volunteers, Hugo’s fundraiser is here. 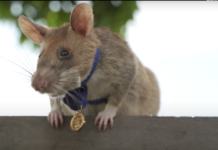