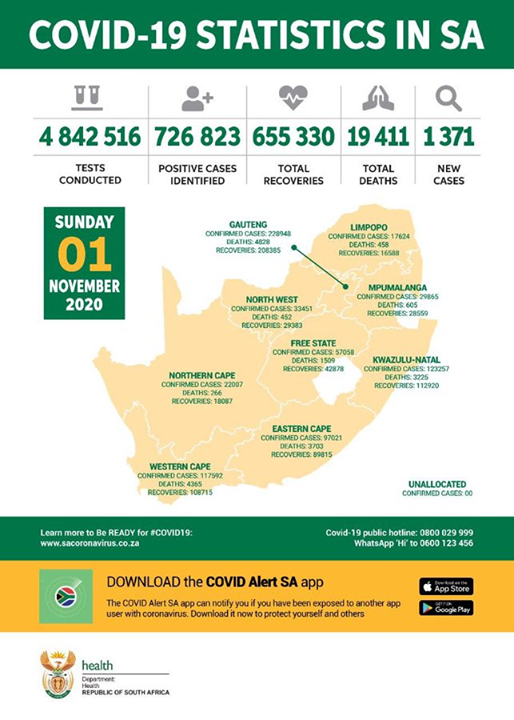 South Africa now has 726 823 COVID-19 cases after 1 371 patients were confirmed to have contracted the virus on Sunday.

Meanwhile, 135 people succumbed to the disease which brings the death toll to 19 411.

Of the latest fatalities, 107 are from Gauteng, 22 from the Eastern Cape, four from the Western Cape and two the Free State.

“We extend our condolences to the loved ones of the departed and thank the healthcare workers that treated the deceased patients,” said Health Minister, Dr Zweli Mkhize.

The recovery rate stands at 90% after 655 330 patients recuperated nationwide.

“COVID-19 continues to grab headlines. The resounding message this week was for all citizens to act responsibly and follow non-pharmaceutical interventions diligently to prevent a resurgence of the virus,” Mkhize urged citizens.

“And in this country alas as across much of Europe the virus is spreading even faster than the reasonable worst-case scenario of our scientific advisers,” he said on Saturday, adding that if they do not act swiftly, they could see deaths in this country running at several thousand a day.

According to reports, there are more than 1 million confirmed cases of Coronavirus in the United Kingdom, while 46 717 people had died.

“Because of the huge exponential growth in the number of patients – by no means, all of them elderly, by the way – would mean that doctors and nurses would be forced to choose which patients to treat,” Prime Minister Johnson said. – SAnews.gov.za