There has been a flood of photos, videos, memes and quotes by Kamala Harris (56) going viral on social media since the announcement that, according to projections, Joe Biden will be the next President of the USA and Kamala his vice-president. But there is one in particular that is being shared worldwide… a reminder that it is the women (and girls) who came before Kamala who held the ladder for her to climb and shatter the ceiling.

The picture shows Kamala Harris striding forward confidently, with the shadow of a child on the wall behind her. The shadow is not of Kamala, but of young Ruby Bridges, the first African American child to attend a white primary school in southern America. The little six-year-old’s brave walk in November 1960, beside her mom and a US marshal (to protect her from an angry mob), advanced the civil rights movement… and was a huge step towards enabling someone like Kamala Harris – a female with multi-cultural roots – to become a Vice-President of the USA.

“That little girl was me”

The image, called ‘That little girl was me’, was first posted in October but has gone viral in the past few days. GoodTrubble said they created it because Senator Harris is “the epitome of both the struggle of yesteryear and optimism for advancements of today and tomorrow. History shows how people of color and women have had to fight for a seat at the table.”

GoodTrubble says Kamala has moved the needle ahead and expanded opportunities for more people, but not because of her culture, race or gender… but because of her “concerted efforts to be a true public servant”. (Shirts with the image can be ordered here.)

“Rosa sat, so Ruby could walk, so Kamala could run”

Some have taken the imagery even further with a collage going viral that includes Ruby, Kamala and Rosa Parks (who refused to give up her seat on a bus to a white man in 1955, thus violating segregation laws of the day, which led to a bus boycott that is credited with sparking the US civil rights movement). Those sharing the collage (see below) have succinctly written: “Rosa sat, so Ruby could walk, so Kamala could run.” 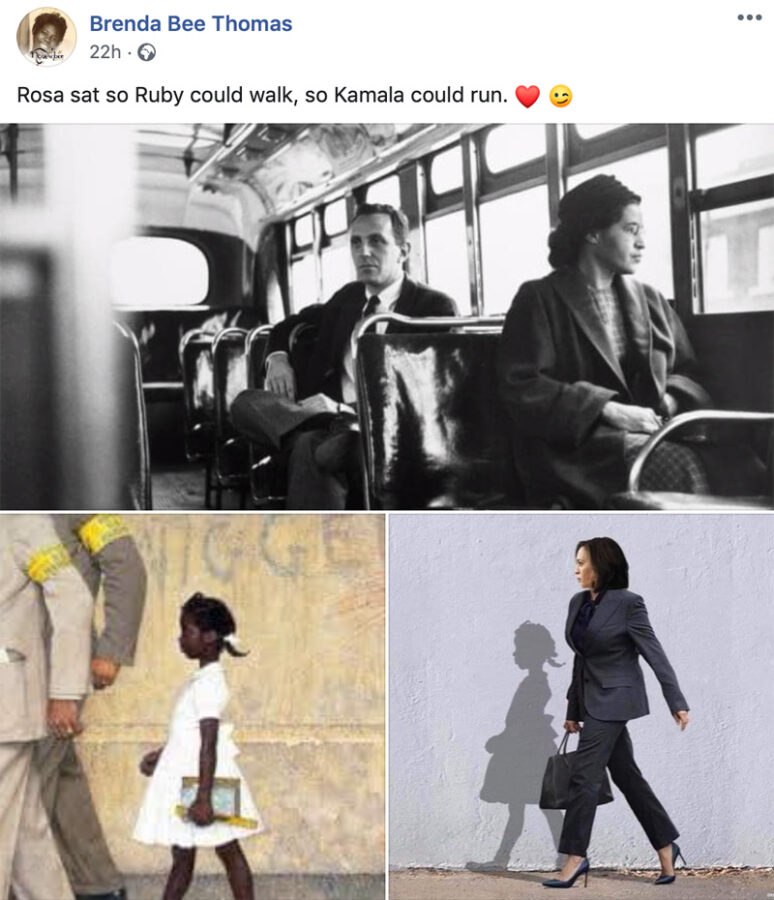 Kamala – whose Indian mother and Jamaican father met at university in the US – will be the first woman ever to become a US vice-president. This historic moment has been celebrated on social media with several other images like the two below: 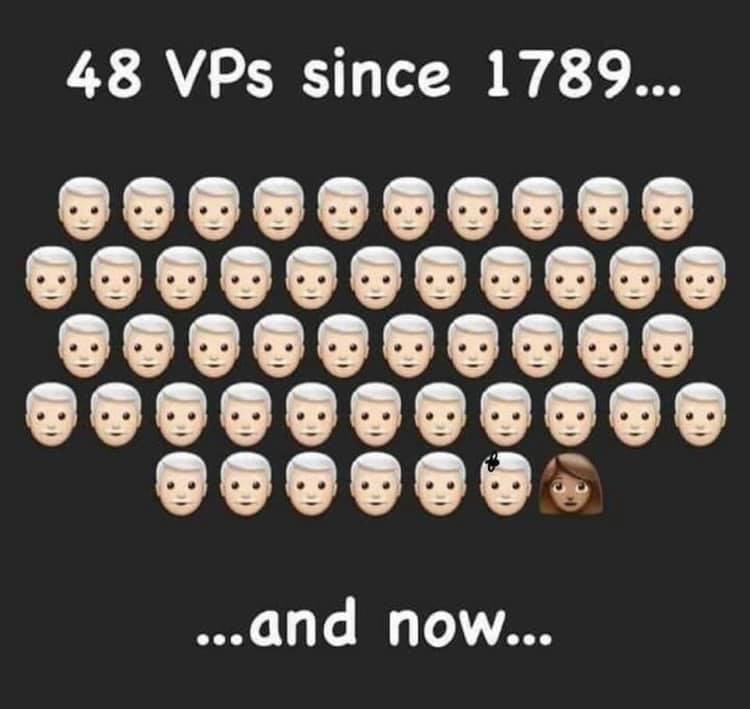 Of the latter image, Western Cape social media user Jan van Dyk said yesterday: “Such a powerful image… Kamala Harris and all her US vice president predecessors… she has become vice-president-elect of the US, the first time in history that a woman, and a woman of colour, has been elected to such a position in the White House. ?”

I’m thinking about my mother, Shyamala Gopalan Harris, and the generations of Black women who came before me who believed so deeply in an America where a moment like this is possible. pic.twitter.com/c3f13juMPw

I hope every little girl watching tonight sees that this is a country of possibilities. pic.twitter.com/E4GYfr2QoO