The total number of confirmed COVID-19 infections has increased to 883 687 after 10 008 new cases were recorded, the latest data showed on Wednesday. 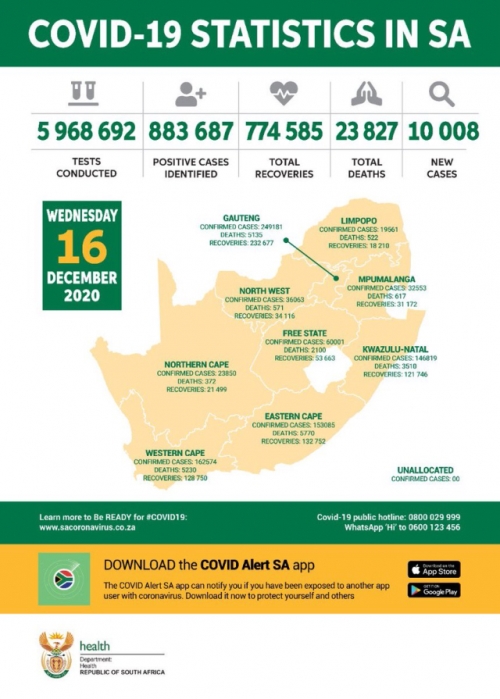 According to Health Minister, Dr Zweli Mkhize, the country has breached the 10 000 mark for new cases.

The last time South Africa recorded over 10 000 new cases was on 1 August when the country had 10 129 additional infections on that day.

“Our daily cases are growing exponentially,” the Minister said, adding that the positivity rate is now sitting at 21%.

“This far exceeds the ideal positivity rate of 10%.”

On Reconciliation Day, Mkhize said, the department had seen a significant surge in the daily numbers, with the Western Cape leading, breaching the 3 000 mark for the first time this week.

Meanwhile, seven other provinces reported spikes, while the Eastern Cape saw a decrease in daily infections.

According to Mkhize, the Western Cape increased from 2 785 new infections on Tuesday to 3 233 on Wednesday, followed by KwaZulu-Natal, which recorded an additional 2 743 cases.

The Eastern Cape had 1 619 new cases, 337 fewer infections compared to the previous day.

The country suffered 166 new fatalities, which brings the death toll to 23 827.

Of the additional deaths, 89 are from the Eastern Cape, 31 from the Western Cape, 25 from KwaZulu-Natal, 10 from Gauteng, nine from Free State and two from Limpopo.

Mkhize said the department will continue to assess the entire country and where risks are identified, they will make a determination if further containment measures or restrictions are required.

The Minister commended all South Africans who are heeding government’s call and complying with regulations.

“We know that although this has taken away time for enjoyment from our people, it will certainly contribute to curbing the spread of the virus.”

Meanwhile, restaurants will now close at 10 pm, while alcohol will be sold from Monday to Thursday between 10am and 6pm, while the curfew has been extended.

Mkhize appealed to the public not to drop their guard.

“We urge people who will be going to the beach [ on Thursday] and on permitted days to ensure that it does not become a day of regret, where people get infected and lives are lost.”

Keep safe during the pandemic

Mkhize once again pleaded with citizens to be responsible and protect themselves.

“Keep a physical distance from others, wear your mask and wash or sanitise your hands.”

The Minister has also noted the various legal challenges that have been brought against government regarding the recent regulations.

“As Health, we stand by the recommendations made to the National Coronavirus Command Council (NCCC), which are well substantiated by evidence,” he said.

He maintained that government’s mandate to protect the lives and health of the people remains paramount.

“We dare not neglect this responsibility by omitting to take the necessary actions to protect the health care system from being overwhelmed and collapsing, as we’ve seen in other countries.”