Talented South African artist – Fourie Ackermann – has used Lockdown to brighten up the rustic village of Friemersheim… and he’s done such a fantastic job, with beautiful large wildlife murals bringing the walls to life, that tourists on the Garden Route are now visiting simply to view his incredible artwork.

Fourie told SAPeople that from the moment he and his wife moved from Pretoria to Great Brak River in 2015, he knew “that one day I would like to do murals in Friemersheim and on the walls in the surrounding area”.

Fourie’s artwork is well known in the theatre and movie industry. In the ’80s he spent five years working in the State Theatre, before becoming self-employed in 1996 when he started creating murals and scenic work on film sets.

“After 30 years in Pretoria we moved down here,” he says. “My wife was a private art teacher for pre-school to seniors. We now live in a small holding outside of Great Brak, close to a community called Friemersheim.” 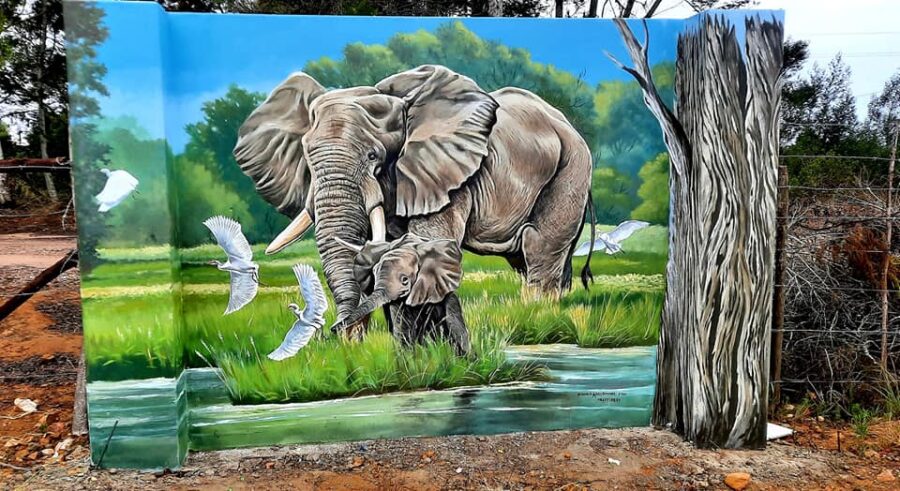 Friemersheim, which is nestled at the foot of the Outeniqua mountains, was founded in the early nineteenth century by a Germany missionary.

The first wall that Fourie tackled is one in which a lion gazes through at viewers through a hole in the wall. And then he did the leopard, the zebras, and so many more.

“Wildlife has always been a favourite theme of mine and we are situated near the Botlierskop Game Reserve. The walls all belong to home owners here in Friemersheim. The lion mural was done on the wall of Morris’ house and his parents lived in the same house and he grew up there. Since then everybody is keen for me to paint their walls ????.” 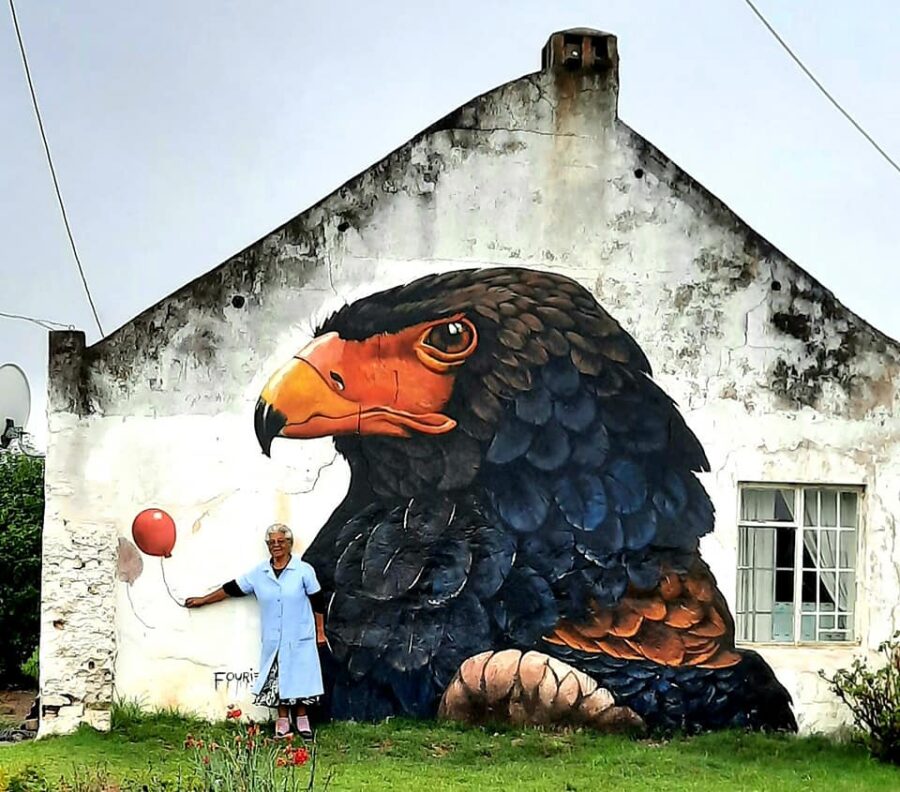 Fourie says: “There is such brilliant street art all over the world, and that also inspired me to look just round the corner and liven up our community. And there are still plenty of walls to do. In Friemersheim there is NO red tape ????.”

So far, all the art work in Friemers has been done out of Fourie’s own pocket, although he does accept commissions from those who’d like a mural outside of the area.

“I think the people of Friemers are enjoying the visitors driving through taking photographs,” says Fourie.

Mossel Bay resident Melinda Janse van Rensberg is one of those visitors who took the 25km Sunday drive to Friemersheim after seeing an article about Fourie in the local Mosselbay Advertiser.

She told SAPeople that she captured the photos on this page with her cellphone. “We discovered this awesome artist who used his talent to make the village pretty during lockdown. Love exploring our beautiful country ??

“I took the pictures with my cellphone?,” she told SAPeople, adding that it’s fantastic how Fourie has “used his talent to make the village pretty during lockdown”.