In between shops being looted and buildings burning, there is an uprising of South Africans who care for one another and for their country. Facebook groups are springing up to help unite people who want to help rebuild SA.

As Brand South Africa says: “Mzansi, our greatest and most powerful weapon now is Ubuntu. Our collaborative force of peace and unity cannot be overpowered.”

There are more people standing up against looting than there are people looting. Eastern Cape taxi drivers are protecting malls and businesses. Ordinary citizens are forming human chains to protect homes and businesses. Nowhere is this more visible than in Limpopo where citizens have bandied together to prevent looting. Their Premier Stanley Mathabatha confirms the situation in the province remains calm apart from a truck being torched on Monday evening and a mob being dispersed from trying to loot Dennilton mall.

Citizens of the province have posted “We refuse to join the looting” signs, and they’re standing in groups outside businesses and malls to protect their infrastructure.

The Premier says the province’s security cluster has information on people who are trying to cause public violence in the province and they are being monitored, as well as attended to.

“As a province, we cannot afford to interrupt our COVID-19 rollout programme and we will not be part of the public violence,” Mathabatha said.

In Gauteng and KZN, where most violent protests are currently being held, residents are rallying to help each other, to clean up business properties that have been ransacked, to deliver milk and bread to those too frightened to drive to emptied out malls.

A #ProtectSouthAfrica hashtag has gone viral, and abroad, expats are making sure the world cares about what’s happening to their family and friends back home. A Change.org petition has been set up by a South African living in the UK.

The founder of one volunteer Rebuild SA group on Facebook, Emelda Masanga, said today that she had anticipated just a few people volunteering to help clean and clear out the worst struck areas in Soweto. Instead, she says, “this initiative has taken flight, we have been contacted by numerous agencies, companies, media outlets and, volunteers. We have been inundated with people who genuinely care about South Africa. The true spirit of Ubuntu. 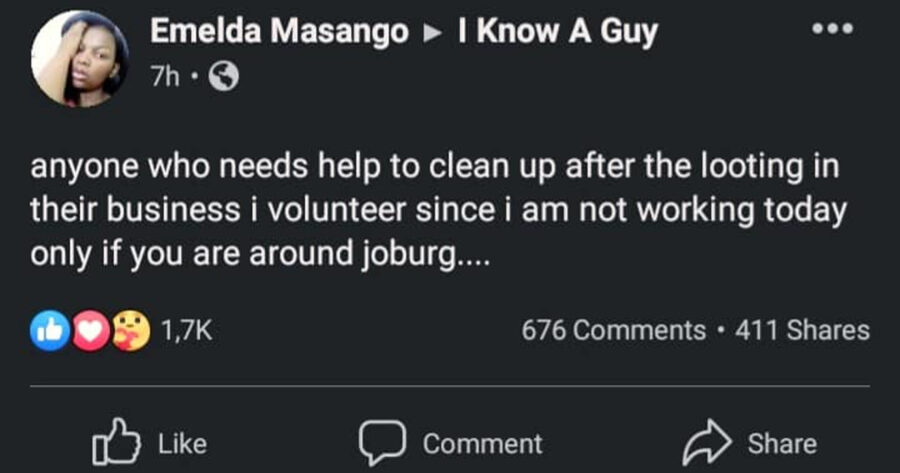 “I never anticipated that this small act of kindness would reach even the most affected in such a profound way. I am proud and overwhelmed. I have some team members that have volunteered to help and assist as I navigate and as we navigate the changes to a simple gesture of peace and love,” said Emelda. The group was only started yesterday (Tuesday) but already has thousands of members.

One volunteer group is putting together baby bags. Another is cleaning office premises.

Messages are pouring in from people saying: “Hi, I’m in Pretoria/Durban/Dubai. I can clean / cook / donate”. Someone offered free cabbages to everyone in her area. Others are making sandwiches. A list has been compiled that businesses who need help can add their names to. There’s a graphic designer offering to redesign store fronts for free. Namibians are offering financial support. Others are willing to provide free taxis, or to visit loved ones in retirement homes.

This the heart of South Africa. Connecting. Rebuilding. And never giving up on Hope.

Limpopo you are beautiful keep up the good work ✊?✊?✊???#Newzroom405 #looters#mallofafrica pic.twitter.com/QrsYtG7oyd

Can we take a moment and give ULUNDI a round of appluse??. They have shown the highest level of maturity and sensibility by working together with police and preventing looting?#looting #SAShutdown #duduzilezuma #saynotolooting #PrayForSouthAfrica pic.twitter.com/zlKE5b2XSP