An incredibly special NSRI crew member, Patrick van Eyssen, who has volunteered for 50 years without a break, has won a Lifetime Achievement Award at the International Maritime Rescue Federation (IMRF) Awards Ceremony. Amongst incredible stories from around the world of search and rescue (SAR) workers’ dedication, selflessness, bravery and innovation, the NSRI won two awards – one for Pat, and the other for its innovative new JetRIB which is sure to be a game changer in rescue operations. (See more info below.)

The NSRI said it was “delighted” for Patrick (known as Pat) who won the IMRF Vladimir Maksimov Lifetime Achievement Award. This prestigious award recognises outstanding services to SAR by an individual or organisation.

“There must be very few SAR Coxswains in the world that can boast 50 years of operational service without a break. Pat Van Eyssen has been a crew member at NSRI Station 3 Table Bay since the age of 19 years and a Rescue Coxswain for almost as long! His service is exemplary and it is a true honour to have such a remarkable individual as a volunteer.

“We are extremely proud of Pat who remains an active Coxswain and serves as a mentor to future crews and continues to make a substantial contribution to the service. He carries our very best wishes to himself, his wife, Jill, and children, Patrick, Tracey, Karen and Candice, a truly inspiring family.”

The National Sea Rescue Institute of South Africa was founded in 1967 in Cape Town, with the first two volunteers using a small Zodiac inflatable craft they named Snoopy, which they transported to search or rescue operations in their own Kombi.

Four years after the first NSRI volunteers started operating their Zodiac from Three Anchor Bay in Cape Town, 19-year-old Patrick van Eyssen, known as Pat, put his hand up and was accepted as a volunteer at the NSRI’s Station 1 in Cape Town harbour.

Some might say that he has salt in his veins.

Pat had been involved in boating and fishing from a young age with much of his free time spent on small craft. He is one of those people who has a natural feel for the ocean, says the NSRI. Some might say that he has salt in his veins.

Pat’s brother in law was involved as one of the NSRI’s first volunteers and it was not long before Pat was introduced to the organisation. Which he took to like a duck to water. Two years after joining, he qualified as a Coxswain, a position that he still holds on Sea Rescue’s Class 1 off-shore rescue boat.

In the early days of the NSRI the Sea Rescue vessel with the call sign Rescue 1, based at Cape Town, would fairly regularly be asked to respond to incidents at the edge of her range. Sometimes as far as 90 nautical miles off-shore.

It was these long-distance rescues, which required precision navigation, well before modern GPS technology, as well the Air Sea Rescue missions for which he volunteered that kept the young coxswain on his toes.

The NSRI says Pat is an “exceptional Coxswain” who has led many successful rescue missions in the treacherous conditions off the coast of Cape Town, South Africa infamously known as “The Cape of Storms.”

This year, at the age of 69, Pat van Eyssen is the only NSRI volunteer with an awe-inspiring 50 years’ active service who is still operational as a duty Coxswain.

Pat has twice served as Station Commander of Cape Town’s flagship station in the V&A Waterfront. His first stint at the helm of Station 3 was from 2001 to 2010, and after a short break, he was re-elected Station Commander from October 2012 to 2016. Pat ran a tight “ship” or station with great care and kindness.

If not actually at the helm of Rescue 1 or Rescue 3, Pat always endeavoured to be in the rescue base mentoring and advising those who were at sea and waiting for the rescue crews to return safely to the station.

During Pat van Eyssen’s time in command, Station 3 carried out 214 operations, rescued 417 persons, towed 61 vessels to safety and assisted a further 261 craft; an indication of the vital part played by this station in assisting persons in trouble off the City of Cape Town!!!

The IMRF Award for Innovation and Technology was given to South African JetRIB (which is a joint venture by Admiral Powercats, Droomers Yamaha and the NSRI). The NSRI said it was “overjoyed” at being recognised by the international Search and Rescue (SAR) community. The award recognises new products and technologies that improve search and rescue. “The JetRIB is an amazing tool for surf rescue,” said Dr Robertson.

Traditional surf rescue vessels that are used the world over are either small Inflatables, Rigid Hull Inflatable Boats (3.8 to 4.7 meters in length) or Jet Skis. The National Sea Rescue Institute of South Africa has for a number of years been looking for a replacement for these traditional vessels that would improve crew and patient safety, be as environmentally friendly as possible and still be fast and agile in the surf zone.

They were looking for a vessel that would take propellers out of the water, reducing pollution as well as possible injuries to patients and or crew from prop hits. Ideally, the new vessel should have the speed and agility of a jet ski but have better stability and be able to carry more patients. 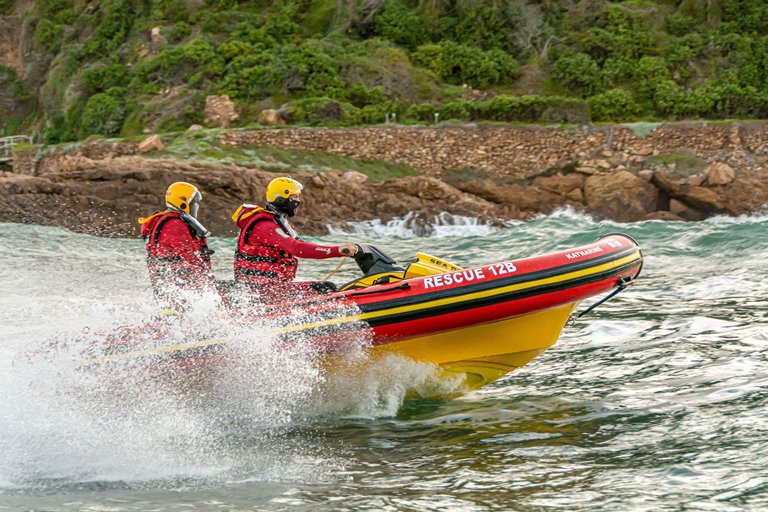 In early 2019 Admiral Powercats and Droomers Yamaha approached the NSRI with a design concept for a Jetboat – a Jet Ski with an extension hull and Hypalon pontoon permanently attached. It seemed to tick all the boxes for an exceptional surf rescue craft and in July 2019 the prototype, given the Sea Rescue class name JetRIB, was taken on a tour of Sea Rescue stations around South Africa.

Feedback from the NSRI’s volunteers was unanimous. The JetRIB was reportedly in a class of its own. The consensus was that it will completely change surf rescue work, making it safer for both crew and patient and, equally importantly better for the environment than the 2 stroke petrol engines that are widely in use.

The JetRIB is a clever combination of the four-stroke Yamaha VX1050 Jet Ski with an extension hull and Hypalon pontoons. It is an environmentally friendly engine and being a jet drive there is no propeller danger to patients or rescue swimmers.

The added hull section has made the JetRIB an incredibly stable rescue platform as well as giving it increased flotation. The pontoons are divided into four separate compartments for safety purposes. 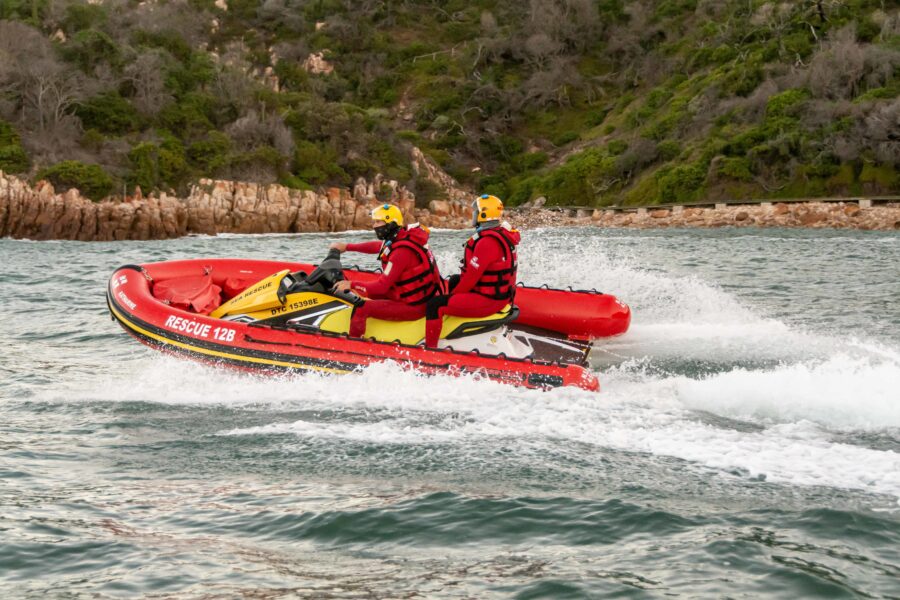 There are many advantages to this new craft: Current surf rescue boats are almost impossible to operate in the surf zone with only the helmsman on board. On the JetRIB this can be done with ease allowing for two Rescue Swimmers to be deployed, and then picking them and their patient up and running to safety even in challenging surf conditions. These sometimes tricky manoeuvres are made safer by the incredible stability of the JetRIB making the loading of crew and patients a lot less stressful in oncoming surf.

The seating position for a crewman on the new JetRIB is behind the Coxswain on a soft padded and very comfortable seat which eliminates the huge impacts experienced on most surf rescue boats that are currently in use.

“There is a wave of excitement with regards to rolling the first ten JetRIBs’ out to our Sea Rescue stations operating in surf zones around the country,” said the NSRI. 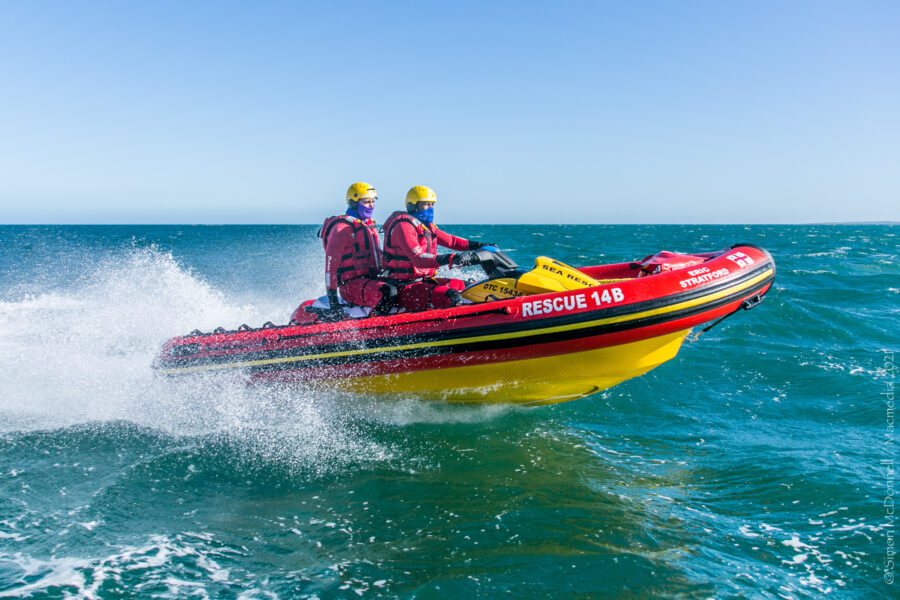 “My hearty congratulations to Patrick and the JetRIB team. I really couldn’t ask for a better team – whether its our volunteers or professional staff – their exemplary dedication, commitment and passion for everything that we do at the NSRI is the reason that we are able to continue to operate as the only maritime search and rescue organisation in South Africa, funded entirely by donors and sponsorships.”

It’s easy to donate to the NSRI, simply visit their website –https://www.nsri.org.za/support-us