I lived and worked in Beaufort West from 2012-2015. As a young and eager to learn Meteorologist, Disaster Risk Reduction Student and Coordinator for the CWP’s CERT (Community Emergency Response Team), I enjoyed working with Mr Hein Rust, my Mentor and now retired Disaster Manager of the Central Karoo District Municipality in Beaufort West. Most of the skills I have today, I learned from him… writes Angelo Ricardo G Hoorn, founder of Severe Weather and Information Centre SA (SWAICSA) Facebook page. 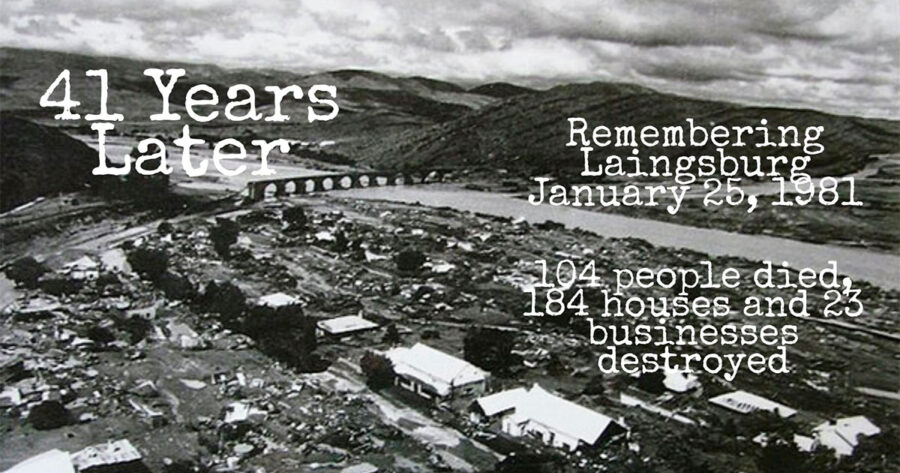 On Wednesday morning, 08 January 2014 at around 02:20 I received an urgent call from Mr. Rust telling me that we had to go to Laingsburg immediately, as the Buffels, Wilgenhout and Baviaansrivers in the Laingsburg area burst their banks after severe thunderstorms brought heavy rains to the area. It was a 1.5 hours drive from Beaufort West to Laingsburg. As we entered the small town of the Karoo in the dark we could hear the thunderous sound of the rivers.

The N1 was closed to traffic, The Provincial Disaster Management Centre was alerted of the crisis and a Joint Operations Centre (JOC) had been set up. Rescue resources, including (spotter) helicopters and the SANDF were on stand-by, in case the situation worsened. Farms were cut off, crops submerged and to make matters worse, communication systems- landlines, cellphones and internet- were failing amidst rising river levels.

We, in conjunction with the Laingsburg Municipality, ordered the immediate evacuation of houses closest to the river, as a precaution. One resident, who had survived the first flood 33 years beforehand, had to be medically treated after suffering a panic attack. Even up until this day I see the anxiety and panic on especially the older peoples faces as they were crying and praying ‘Asseblief, Here, asb tog nie weer nie‘ (Lord, not again, please)…

Of all natural disasters that ever happened in South Africa, the Laingsburg Flood Disaster saddens and emotionally affects me the most. Yes, I was but 2 years old when the disaster happened, but I am not ashamed to say that I still cry on this day every year.

This Disaster is one of the reasons why I decided to pursue a career and attained double-Doctorates in both Meteorology and Disaster Risk Reduction. We as humans will never have the ability to stop massive natural disasters from happening, but we, as a Disaster-Aware-Community, can help to mitigate the impact of disasters when they happen and build more resilient communities…

I have interviewed people who went through the Laingsburg Flood Disaster. Some of them were understandably reluctant to talk, for others it was therapeutic. The risk of severe flooding remains an ever-present threat to Laingsburg, but the likelihood of a Disaster of this nature ever happening in Laingsburg again today is much lower than it was in 1981, thanks to the District Disaster Management Centre in Beaufort West which acts as overseer, the Laingsburg Municipality who have walked extra miles to ensure that all safety protocols are in place and adhered to, the Emergency Services who is always on standby to assist as well as the People of Laingsburg who are now more aware of the dangers of Flooding and Flash-Flooding in their region…

The next time you drive through Laingsburg, please make time to visit the Flood Museum and please support the Flood Shop.

The Laingsburg flood in 1981 on January 25 is recognized as one of the worst natural disasters in the history of South Africa. The Flood destroyed 2/3 of Laingburg’s infrastructure, destroying 184 houses and 23 commercial buildings, including an Old Age Home.

The rain started on the weekend of 24th and 25 January 1981 but it was more intense in the Moordenaars Karoo, a region north of the town…

The Moordenaars Karoo lies to the east of the Klein Roggeveld plateau up to the Gatsberge. It is an extremely dry area. The origin of this area’s name is not known, however, some say it is because of the extreme weather conditions. This area is the domain of the Buffels River which is mostly dry but can be quite ferocious after heavy rains. The river played a big part in the drama that unfolded with the devastating flood of 1981.

The Buffels River already overflowed its banks around 08h00 the morning of Sunday 25th January 1981. At the same time, two rivers named Baviaans and Wilgerhout integrate with the Buffels, meaning there was a much higher volume of water accumulated at one time. The latter integrates just in front of the railway bridge. The level of the water started to rise in town at about 12h00 and at 14h00, the town (CBD) was almost fully submerged. While the water rose by seconds there was no time for those still at home to take any belongings with them. Most of the residents were used to water levels rising from time to time up to their doorsteps, particular those located next to the Buffels River. It is estimated that the river current was 8000m3/s (8000 cubic meters per second) at its peak. 1m3 (i.e 1 cubic meter= 1 ton of water)! (FYI: The river current of the Orange River at Prieska is currently at 3818.05 m3 (25|01|2022, info credit Gerhard Visser)

Those trapped in their houses fled to their roof for safety, but eventually, the roofs collapsed. The speed and volume of water were higher and stronger in the southern part of the town because of its location and obstruction in and around the river i.e. railway and N1 national road bridges. All houses were swept away in no time and so were the people. 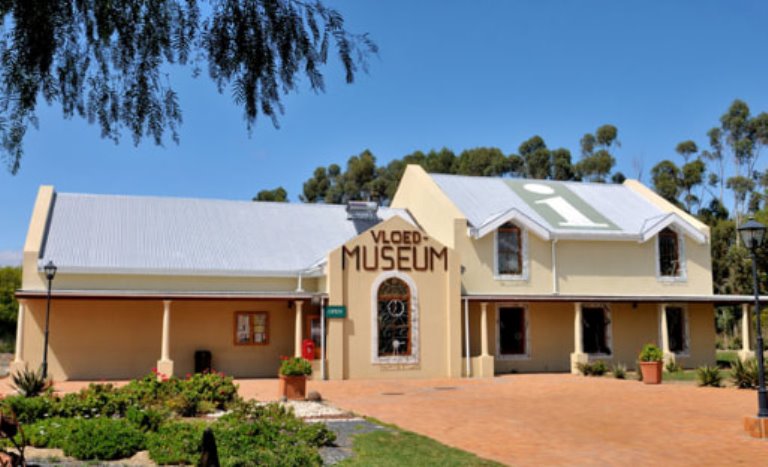 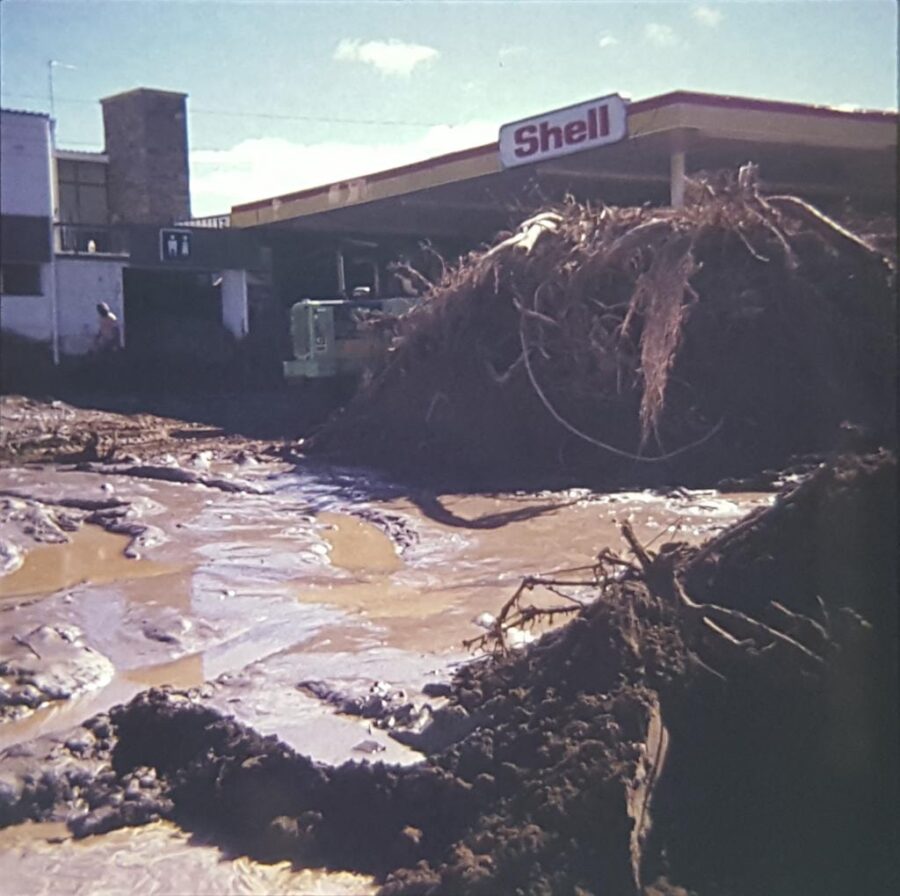 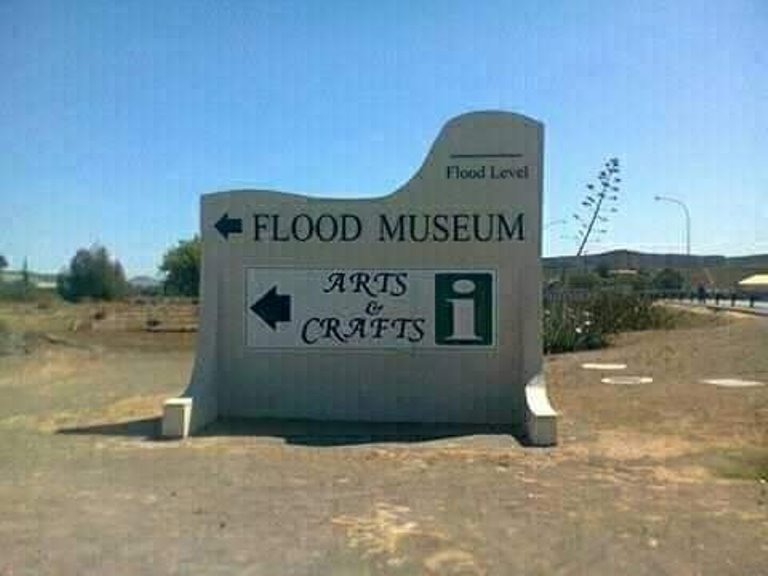 Consequently, about 140 people lost their lives. One Hundred and four (104) people were from Laingsburg and others from the surrounding towns such as Montague, Ladismith, and Zoar. The force of the water was so immense that victims’ bodies were found as far away as Mossel Bay. It is said that about 12 people were washed downstream and eventually rescued at the Floriskraal dam about 21km’s outside town. Many bodies were unidentified or not even found. 41 years ago this all happened.

The children of the district used to play in the river after lunch on a Sunday afternoon, but that day, Black Sunday 25 January 1981, was different. It took the lives of nine children from one family, named Diko. That was the biggest loss of a single-family. Many recovered bodies were buried in the flooded cemetery of Laingsburg.

Today the flood level can still be seen at buildings in town. It is also indicated in town by means of a signboard. Flood experts (Hydrologists) estimate that a flood in Laingsburg of this magnitude has a recurrence interval of once, on average, every 100 years.

In the case of the Laingsburg Disaster:
•climatological (weather),
•flora (plant in the region),
•hidrologic (relating to the characteristic features (such as flow or depth) of bodies of water,
•topographic (eg. Hills, valleys, rivers) and
•human error were all roleplayers in this tragedy. 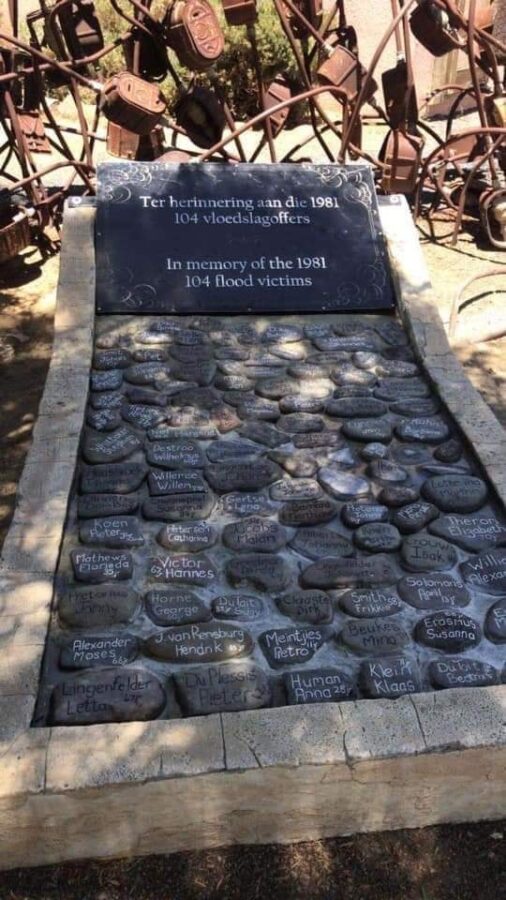 MAY THOSE WHO PERISHED IN THIS DISASTER REST IN PEACE. OUR DEEPEST CONDOLENCES TO THE FAMILIES WHO LOST THEIR LOVED ONE