Season 2 of Raised by Wolves, the biggest series ever filmed in Cape Town, is now streaming on Showmax, with new episodes every Friday. The show includes South African star Kim Engelbrecht, whose role has catapulted her into the IMDb Top 2500, as well as some spectacular SA plant life!

Film Afrika was the South African production company, with much of the filming taking place at Cape Town Film Studios and Lourensford Wine Estate.

Season 1 followed two androids, Mother (Danish actress Amanda Collin) and Father (Abubakar Salim from Jonestown), tasked with raising human children as atheists on a virgin planet, after Earth had been destroyed in a religious war. The season also introduced Marcus (Vikings’ Ragnar, Travis Fimmel) and Sue (Niamh Algar from Wrath of Man), an atheist couple who took on the identity of Mithraic believers to escape Earth. 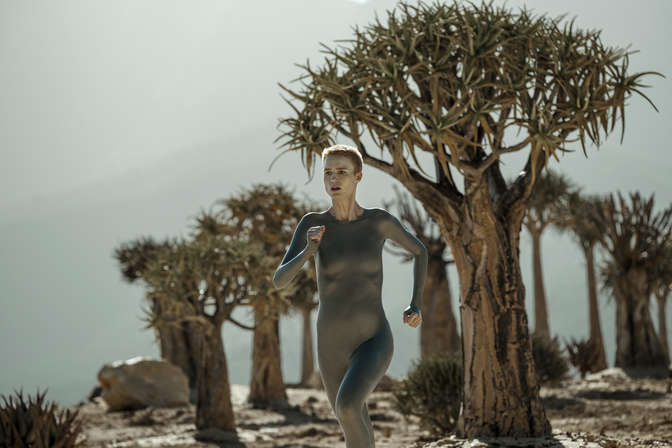 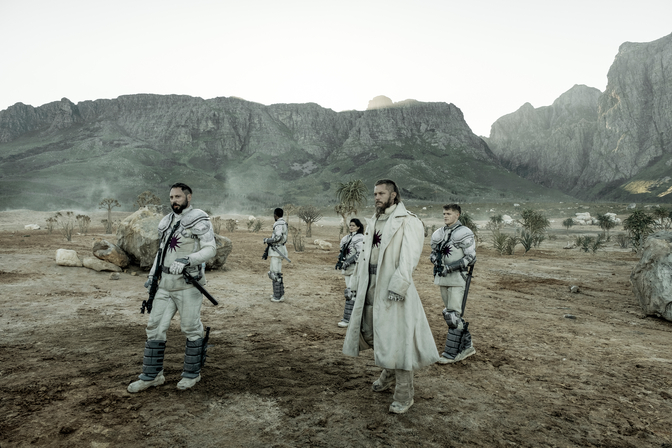 Raised by Wolves is the biggest series ever filmed in Cape Town, South Africa. In Season 2, Mother and Father move their brood of six human children into an atheist community on Kepler-22b’s mysterious tropical zone. But navigating this strange new society is only the start of their troubles as Mother’s “natural child” threatens to drive what little remains of the human race to extinction…

SAFTA-winning South African star Kim Engelbrecht (Reyka, The Flash) has a key role this season, which has catapulted her into the IMDb Top 2500. She joins the cast as Decima, a weapons engineer who becomes Marcus’ first recruit. She’s also trying to rekindle a relationship with an android version of her dead daughter, Vrille.

“Once you create something, you immediately think that there’s going to be some sort of connection,” Engelbrecht told Rotten Tomatoes. “She’s trying to have this connection with a daughter, which doesn’t come immediately, and it doesn’t come naturally, because she’s not a daughter, she’s an android.”

Season 1 was one of Showmax’s 10 Most-Watched of 2021 and was nominated for three Critics’ Choice Super Awards: Best Science Fiction/Fantasy Series, Best Actress: Sci-Fi (Collin), and Best Actor: Sci-Fi (Fimmel), as well as Emmy and Academy of Science Fiction, Fantasy and Horror Films awards.

Season 2 has a 100% critics’ rating on Rotten Tomatoes. Inverse calls Raised by Wolves “Ridley Scott’s best sci-fi since Alien”; Decider hails it as “the most exciting sci-fi show since Battlestar Galactica”; and Paste says, “There is simply nothing like Raised by Wolves on television… TV’s most uniquely bizarre series remains a glorious sci-fi journey.” 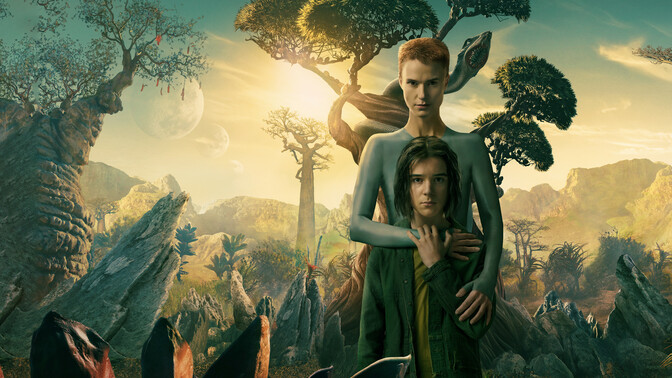 “TV’s most uniquely bizarre series remains a glorious sci-fi journey”Much of the praise has been for Collin as Mother, a necromancer battle android who can kill with just her scream, but who has been reprogrammed to raise the human children. The Wall Street Journal calls Mother “the most memorable female/female-like space entity since Sigourney Weaver’s Ripley in Alien.”

But parenting is hard, even without an alien planet and religious fanatics to deal with. “No one has the answers on how to be a good parent,” Salim told Rotten Tomatoes. “Even with Google in your head, you still have no idea what’s right, and what isn’t…”

Season 1 was set in a much harsher, more barren land, so the tropical zone feels like an oasis in comparison, even if there’s an acid ocean. Speaking about Mother and Father, creator Aaron Guzikowsky, who was nominated for a Writers Guild of America award for Season 1, says, “They kept themselves going with their dreams of this other part of the planet, this bountiful, beautiful part where survival would be easy, where they could spend more time living their lives and not spend every second of every day just staying alive… Now they’re here – and it’s almost one of those too good to be true moments…”

“There’s been definite moments where we as a cast have read the script and been like, ‘This is insane. Thank god we’re not doing it.’ Cause it is… it’s quite extreme at times, you know?” says Salim.

Watch the Season 1 making of Raised by Wolves:

Watch the Season 2 making of Raised by Wolves:

Watch Raised by Wolves on Showmax