Growing up, for me, it was always about the Lion. Being born from the Lion Clan made it worse and I heard many stories about this formidable King of the Beasts… writes Jinxy S Luther, a safari guide and operator at Delta Guides Safaris in Botswana.

One day, probably I was only 7 to eight years old, I had a traumatizing experience in Beetsha village (close to the Okavango Delta). Life was a mixture of pleasure and fear, it was the time of drought and lions terrorized the village at night.

The villagers had a name for these man-eaters; they called them “Mangwangwa“. These lions were on a rampage in Beetsha and surroundings areas; they sent fear through everyone and restricted people’s movements just before sunset. Believe me you can call it a lion curfew – for sure the title would fit perfectly, and many people of Beetsha know this man-eater story.

These lions were also believed to be people; medicine men were turning into lions and killed people. Later after the man-eaters had gone people were more relaxed and could walk at night between huts and homes, and we went back to our adorable easy cool-breeze filled sleep outs, in the yard (lelwapa) under the stars. The lelwapa was an enclosure made with either common reeds or grass, with one main entrance that has a secure door made of the same material reinforced with strong sticks. This is called “thitata/setata“.

One night came and we prepared our beds next to the fire, and after the African folklore stories from grandpa we were snoring away, lined up close like maize and a good distance from the fire. This was the life, second to none.

Recalling very well, about midnight, we felt like a dog was walking on top of us, and we shouted at it and pushing it off, but it was heavy and the next thing I heard was a scream from one of us, dogs barking with fear and the elders were shouting… and next was a loud crackly noise as the beast broke through the yard into the darkness… and my youngest uncle was still screaming away until we couldn’t hear him anymore, a shiver ran through my spine and I couldn’t move, my other uncle grabbed me and we quickly got into Grandma’s mud-hut, clustered together wishing it was daylight and visibility was much better.

The beast had got him. My eldest uncle and another went out and fuelled up the fire, the fire blaze was huge and gave everyone hope, and we stayed together the whole night. In the morning my father and other furious members of the village brought together all the rifles and embarked on a hunt.

I remember them going through a ritual; they were splashed with water that had beads and other stuff I couldn’t readily identify, all the women were given long sticks which I didn’t know what for apart from self defence, until later.

The men disappeared into the bushes tracking the lion and not far from home were heard guns blasting and men shouting, it wasn’t a victory noise it was noise of encouraging each other, like a war-cry to intimidate the lion, more gun shots and later, the unmistakable victory cry and the ladies started to hit the ground with the long stick simultanously and ululating very loud.

Maybe about forty five minutes later the men appeared with the lion tied to a long stick dangling between two men as they carried it on their shoulders.

It was a shocking and most scary time of my life. A memory that has failed to go away and I have accepted to live with. The day I saw a lion for the first time and this memory always to come to mind when I see any lion in the wild today, thanks God no grudges there.

After putting the lion on the ground my father asked me to come close and I was quickly bathed or rather splashed with a little of its blood, and they asked me to hold the lion by the tail and pull. My father looked at me and asked me not to be afraid, at this point it was one of the things that was far from accomplishing. I was shaking, tears filled up my eyes every half a second, I pulled the heavy tail and the lion growled like it was alive. I didn’t move a muscle, I dropped the tail moved back and was waved to go, and Mom was waiting close by.

I watched the others going after me and I noticed that it was a ritual all kids were going to go through. I never asked why until about twenty years later. So my first encounter wasn’t a pleasant one, but it is then that I realised that I was part of the wild, I was going nowhere else but to live in the wild, love the wild, respect it and always be grateful for being part of this Okavango Delta, but most of all work hard to help conserve it. If I have survived Mangwangwa, the drought, tetse-fly, malaria, chicken-pox (Machu), then surely the reason is to conserve the wilderness for a better future.

The Buffalo and the Lion

This article today wasn’t about that story. It’s about other things much more exciting: my observations in and experience. It’s about the Buffalo and the Lion. The eternal enemies of the wild. It is perhaps the Lion that has given the Buffalo such an awful temper because it’s the only predator that can follow a herd through the whole night and even more, just to get a piece of Buffalo in its claws. 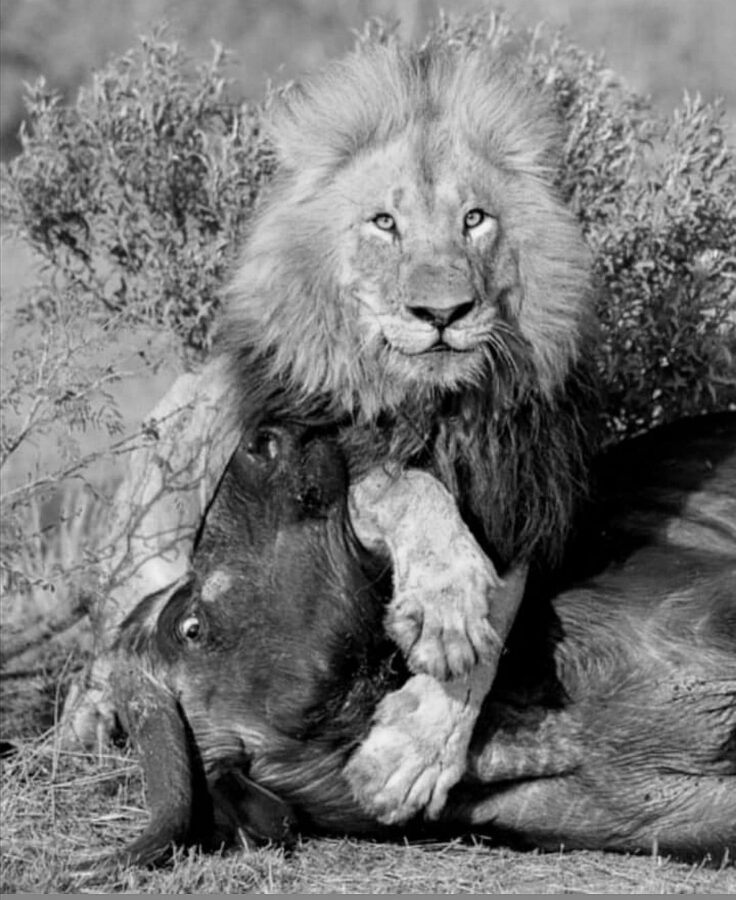 Buffalos and lions come a long way as enemies; a true predator and prey story. The interesting thing is how nature built the two, making them equals on the battle field. I have noticed the following:

When a Buffalo meets a lion its always a clash of the titans, for sure a “Contest of Equals”.

Speed vs Stamina:
…. lions can sprint nearly twice or more faster than a buffalo on short bursts but on the other hand the buffalo has stamina enough to out run the lion on long distance chase.

Tough Hide vs Sharp teeth and Claws:
… lions are generally armed with powerful Jaws with very sharp teeth and strong claws to penetrate most animal skins but the buffalo wears one of the toughest hides on the face of the planet. This is one of the reasons why lions don’t easily sink their teeth and claws like it would on kudus, giraffes, zebras etc.

Predator Numbers vs Strength:
… lions are gregarious cats living in family groups called prides and this make hunts easy and mostly successful. Lions may corner one buffalo and the dagga-boy is still capable of defending itself remarkably well with two or three lions on its back with desirable endurance on the battle field until the other herd members show up to help or it may gallop away leaving the kings looking confused and regretting that they under estimated the lone warrior.

Skills vs tactics: for their size lions are very agile cats with unbelievable skills combined with sheer speeds on short bursts but the buffalo is packed with good tactics to counter attack the skills like shaking the lion off, making swift turns to throw the lion off the back and running into huge bushes and even into deeper waters if in swampy areas. 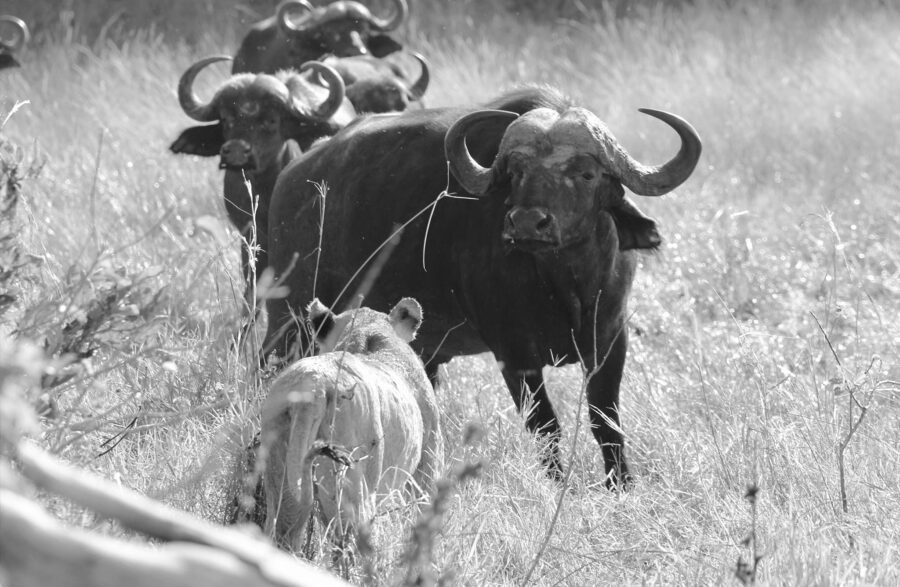 In the wild a lot can happen and all the above can be seen though not often, but a lot of safari guides have witnessed it all. From the hunter becoming the hunted and sustaining serious injuries which may lead to even death. I have seen it. One lion hunting and doing it exceptional well and over six lions being chased off by one buffalo like flies. Either side can either lose or win the fight, and it all depends on experiences.