A last-gasp penalty goal by Damian Willemse secured the Springboks the narrowest of wins over Wales in the first of three Castle Lager Incoming Series Test matches, with the 82nd minute effort edging the home side past Wales by 32-29, after the visitors held an 18-3 lead at the break.

A few minutes earlier the Welsh, despite having three players in the sin bin, scored a try by replacement hooker Dewi Lake to even the scores at 29-all, but crucially, they tried to slap down a Bok pass 40 meters out, giving Willemse the opportunity to nail down his name in the record books.

The visitors clearly came to play on this tour and two more stunning Tests await in Bloemfontein and Cape Town in the next fortnight. 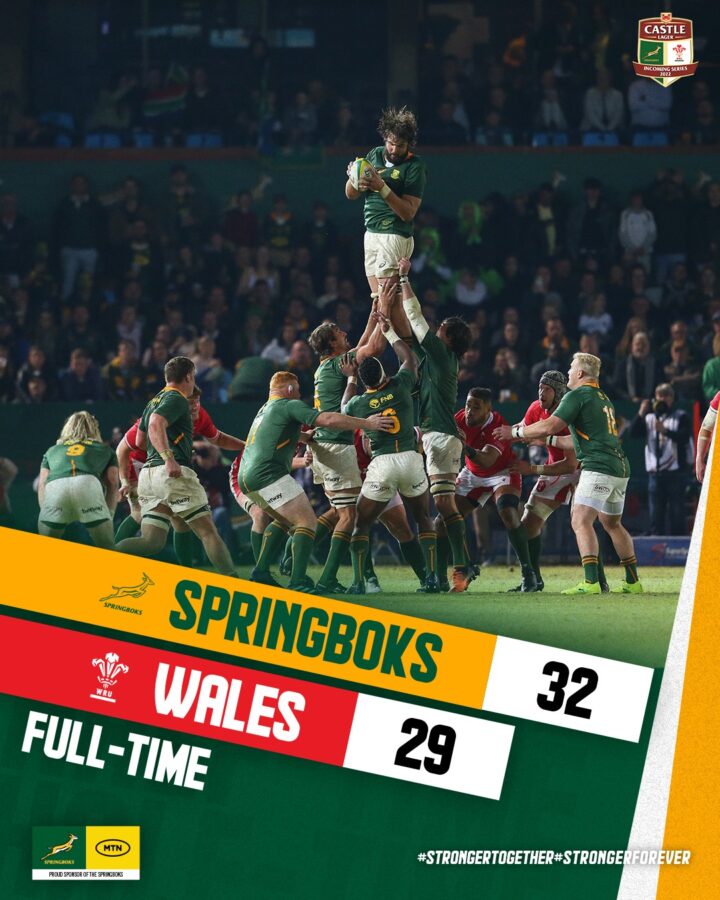 But back to Loftus Versfeld, where a 51762 strong crowd attended the first local Test where spectators were allowed since August 2019. The visitors’ lightning quick wing Louis Rees-Zammit scored twice in the first half as his team took at handy 15-point lead at the break.

The Boks could not get going, despite enjoying territorial advantage and more possession. Flyhalf Elton Jantjies struggled to find any luck in his kicking or distribution, and when Willemse took over at pivot in the second half, it was a different ball game.

The Boks enjoyed an early penalty, with Wales straying offside at a kick. They set up their first attacking lineout, but that did not quite work out as planned. The ball was lost, Wales attacked down the short side and then recycled to the right where Rees-Zammit suddenly found himself in space with no one in front of him. He duly scored to silence the capacity crowd.

Biggar’s conversion went wide, but the intent and ability of the Welsh were clear – they came to play.

Barely five minutes later Biggar landed a beautiful drop goal from 40 meters out, this time after regaining possession from a fluffy Jantjies up-and-under, with the 8-0 score line not what was anticipated by the bumper crowd.

The Boks’ early game plan of hoisting the ball high and contesting did not work that well, mainly because the Welsh defence were up for the aerial assault and Jantjies was off the mark with many of his kicks.

An early scrum penalty forced by Frans Malherbe gave the Boks some advantage and Jantjies looked set to open the score, but hit the upright and another chance went begging. The Boks kept up the pressure though and when Wales tried to slow the ball down on the floor, it handed Jantjies an immediate respite and a 62nd penalty goal in Springbok colours.

Biggar was playing a real captain’s innings at this stage and slotted another long-range effort, this time a penalty goal from close to 50 meters out to extend their lead to 11-3.

Jantjies had an opportunity to cut that back, but pulled a fairly straight forward kick to the left of the uprights, and to add insult to injury, the Bok flyhalf kicked the next penalty – an effort to force an attacking lineout – too far, and Wales could breathe a sigh of relief.

Despite their failure to gnaw into Wales’ lead on the score board, the Boks kept the pressure through a number of surges, mostly by Eben Etzebeth, Lood de Jager and Jasper Wiese.

Faf de Klerk darted around the short side to start a promising attack and with tempers also flaring, referee Nika Amashukeli had to speak to Biggar and Siya Kolisi to calm things down.

The Boks were awarded a penalty and opted for an attacking lineout. This did result in some ground gained, but still no try, with the option of high kicks not working, but maintained.

Wales on the other hand, pounced when offered the slightest of chances. Rees-Zammit grabbed a second after a somewhat lucky bounce from a long lineout throw and he kicked ahead to score the easiest of tries. Biggar converted and suddenly Wales were up 18-3 with five minutes of the half left to play and without any real presence in the SA half of the field for most of it.

A sense of urgency – by keeping ball in hand – finally got hold of the Springboks a minute or so later. De Klerk made a great break into the Welsh 22 but Biggar was judged to slow the ball down and this time Amashukeli had very little option but to send the Wales captain to the bin – their first of four yellow cards in the match.

The Boks attacked again through the lineout, but Wales managed a turn-over and could kick the ball into the stands to end the half 15 points to the good.

Wales started the second half without Biggar, while the Boks replaced Jantjies with Willie le Roux, who moved to fullback and Willemse slotting in at No 10.

The pressure applied to Wales remained the same and they continued to leak penalties. A first lineout drive was stopped, but the dam wall was due to burst and from another, Bongi Mbonambi scored his 10th Test match try. The conversion by Willemse was good and suddenly the game was on with just more than 30 minutes to play.

Marx was into the fire within five minutes, duplicating Mbonambi’s effort of the back of the lineout maul. For Marx it was test try number 11 and it edged the Boks closer and closer. Willemse was wide with his effort, but suddenly the lead was down to three.

Biggar extended that to six again with 25 minutes left, when the kicked a second penalty goal for a 21-15 lead.

The crowd realised that the last 18 minutes was going to be one where they had to carry the Boks home as Biggar kicked a third penalty goal to move the margin two scores away at 24-15.

Cheslin Kolbe cancelled one of those two with a delightful score in the corner. The Boks attacked through the forwards and Smith and Louw were stopped short.

The ball went to the backs with Le Roux’s play-making abilities coming to the fore and Kolbe doing what he is doing best, scoring tries when his side needs him to. Willemse kicked a peach from the touchline and suddenly the Welsh lead was two points – 24-22.

Salmaan Moerat joined the fry in place of Eben Etzebeth to make his debut and Herschel Jantjies took over from De Klerk with eight minutes left. Rees-Zammit was yellow-carded with five minutes left and the Boks forced another lineout close to the line.

This time, Wales pulled down the drive and Amashukeli handed the Boks a penalty try and carded Rhys Carre for doing so, while Alun Wyn Jones was also yellow carded in the melee.

That gave the Boks the lead for the first time in the match (29-24), but Wales were not out of it yet. The visitors slienced the crowd by scoring a lineout try themselves, despite having 12 players on the field, when Lake barged over to even scores at 29-all. Biggar missed the conversion with two minutes left.

The Boks charged upfield one more time in a desperate surge of the winning points and when Wales slapped down a Bok pass, it was left to Willemse to claim the win with a stoppage time penalt goal, which he duly slotted, much to the jubilation of the first sold-out Bok test match in three years.

🥳 What a game! The Boks snatch the victory at the death courtesy of a pressure penalty goal by Damian Willemse. It ends 32-29 to South Africa after 80 minutes of very tough Test rugby. Thanks for anothe epic, @WelshRugbyUnion!#StrongerTogether #StrongerForever #SAvWAL pic.twitter.com/U1aDlLNyT6