“I do believe that you deserve equal pay for the work that you do. I have been told that you get ten times less than what the men get when they play and that has to come to an end,” President Ramaphosa said to the national women’s football team on Wednesday, during a ceremony at the Union Building in Pretoria.

The President said the SA government must demonstrate its appreciation to the team by adding on to the R5.8 million contribution, which was announced by Minister of Sport, Arts and Culture, Nathi Mthethwa, on Tuesday.

“We need to give added remuneration to these young women who have made our country so proud. Even in the various sporting codes that we have, I would like us to embark on a programme that is now going to recognize equal pay for equal work so let us do everything we can.

“We are a non-racial, democratic and non-sexist country. I am hugely opposed to unequal pay and it must come to an end. We must demonstrate our appreciation for you with regard to the pay that you get and everyone in the country supports that you should be given what you deserve.”

“We must make sure that we eliminate the whole process of unequal pay out of our system. When men and women do equal work, the remuneration must be the same. We cannot continue treating the women of our country in an unjust and unfair manner like that,” the President said. 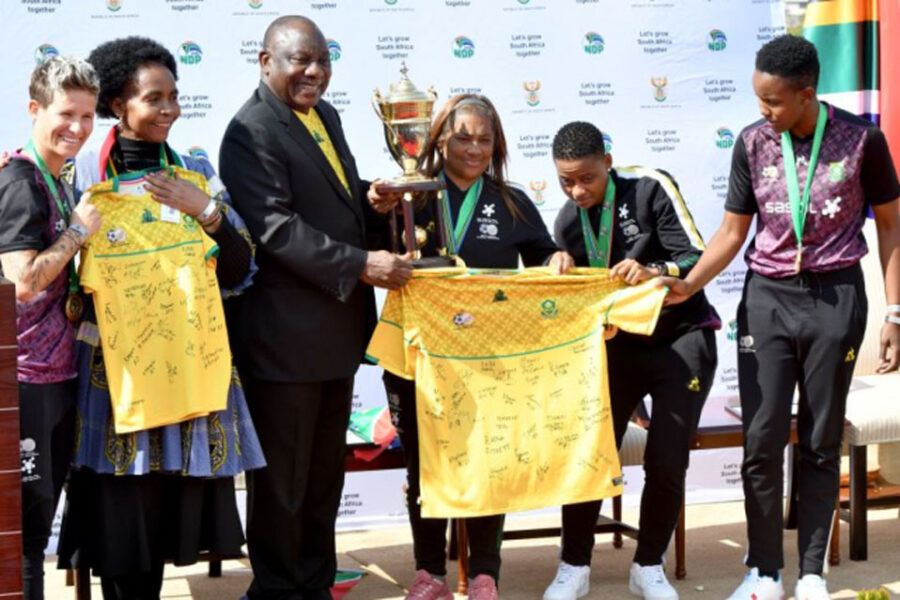 Ramaphosa paid tribute to Banyana Banyana for representing South Africa with distinction at the WAFCON.

Praising their tenacity, he said:

“No matter how great the setback or the obstacle in your path, you overcame them. Every South African is inspired by your determination to never give up, and to try, try and try again.”

He thanked the women’s football team for putting SA on the map once again.

“You fired up the dreams of young girls all over the country. You have made us proud. Five times, you have come close but you were denied the victory that you deserved and now you have claimed it and by so doing you have reached the real pinnacle of women’s football on our continent,” President Ramaphosa said.

The President also thanked national coach, Desiree Ellis, who led the team in winning 2-1 against Morocco at the 2022 WAFCON finals that took place at the Prince Moulay Abdellah Stadium on Saturday, 23 July 2022, in Morocco.

“We thank you for your skills, professionalism, cool and your integrity. You led Banyana Banyana with a great deal of dignity and we want to thank you as you led them to victory.

“Thank you to the captain for your abled leadership and for keeping the team focused and united. We are pleased that you provided this type of leadership.

“We stand proud as a nation on the African continent. We have no doubt that you will do us proud next year in the Fédération Internationale de Football Association (FIFA) Women’s World Cup. You will have all of us behind you once again and we will wish you the very best there,” the President said. – SAnews.gov.za

Congratulations @Banyana_Banyana. We are immensely proud of you and all that you have accomplished. This is only the beginning. Well done. pic.twitter.com/dAAUGylJ8P