SA’s Minister of Sport, Arts and Culture Nathi Mthethwa has announced a R5.8 million contribution for Banyana Banyana after they won the 2022 Women’s Africa Cup of Nations (WAFCON) tournament.

The Minister tweeted that the R5.8-m is in addition to the R21-million investment the department has already made in the women’s national football team. “We thank the supporters who came in their numbers to welcome the Queens of African football. #WAFCON2022” he said, after crowds of proud South Africans made their way to OR Tambo International Airport yesterday to welcome the team home. 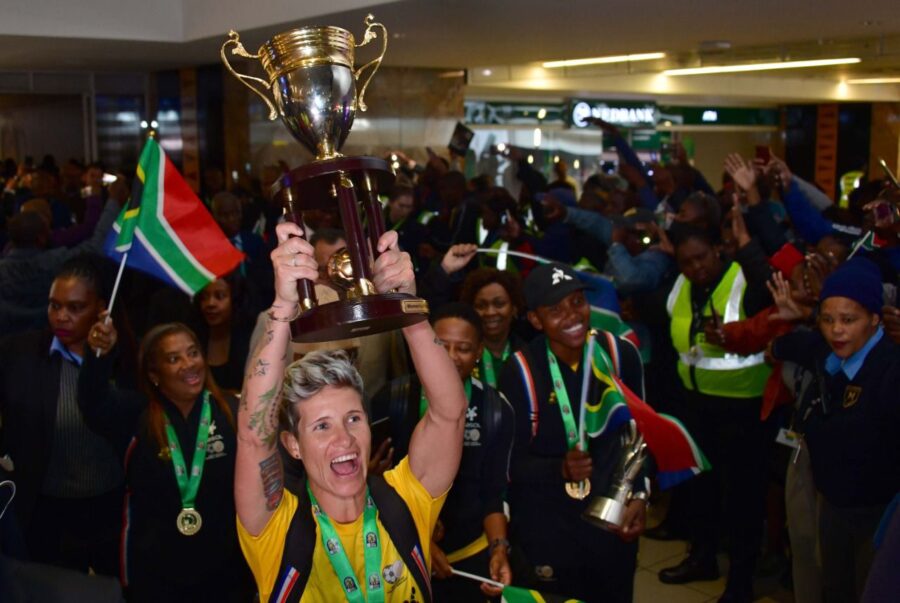 According to media reports, the players had already been promised R400,000 each for winning the competition.

Addressing the welcoming ceremony for the team, Mthethwa said the contribution for winning was in addition to the R15 million investment government has made over the past 3 years in women’s football and the R9.2 million investment set aside moving forward.

“Three years ago, the Department of Sport, Arts and Culture initiated the formation of the Women’s Football League for R15 million, the fruits of which we are currently seeing. Moving forward, we have committed to invest a further R9.2 million through the South African Football Association (SAFA) for Banyana Banyana,” the Minister said.

Scores of jubilant supporters welcomed Banyana Banyana back home from Morocco after the players beat Morocco 2-1 at WAFCON on Saturday. They arrived on Tuesday at OR Tambo International Airport to a sea of green and gold fans, South African flags and placards.

Women to be paid equally

“We have finished engaging provinces on the pay parity… this process will ensure that women are paid equally. It is going to be a law in this country that Banyana Banyana and Bafana Bafana will be paid equally because we are making that happen as the government. As the government we are supporting all of the women’s teams,” Mthethwa said.

SAFA President, Dr Danny Jordaan, called for the gender disparity in relation to income in sports to be addressed.

“In South Africa, men get broadcast revenue while women get nothing. Banyana Banyana matches have no value. These are the issues that we need to address.

“We will meet with government because this is not a Federation Internationale de Football Association (FIFA) creation, or a SAFA creation or a Confederation of African Football (CAF) creation. It is a societal creation and we must work together to address the disparity between women and men in sports,” Jordaan said.

He promised to engage with the national executive at SAFA to address gender disparity when it comes to remuneration and bonuses.

Congratulating the team, Jordaan noted how the players worked hard as they did not want to let the nation down.

“The celebration today is an honour for us as a country. This celebration is about the team that delivered on our vision, a team that stuck to the plan and carried the aspirations of our country as well as their own aspirations to win the WAFCON. The team was not deterred by the fact that they have tried five times already and this was their sixth attempt,” Jordaan said.

The team is expected to present the trophy to President Cyril Ramaphosa at the Union Buildings in Pretoria tomorrow. – SAnews.gov.za