Everyone loves winning. Everyone loves to watch their team win. But what we all love most is seeing our team having FUN while competing – win or lose. And no one is better at having fun than South Africans! By Sine Thieme. 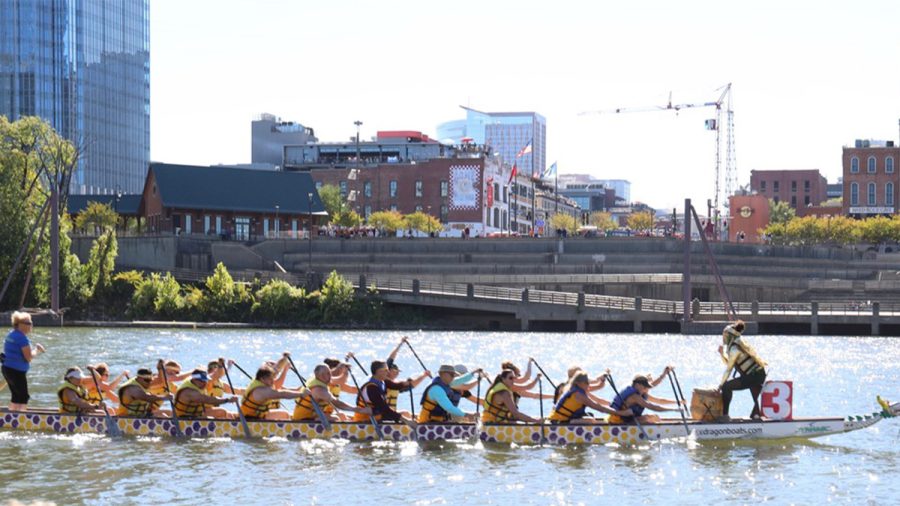 With life returned to (almost) normal this October of 2022, the Friends of South Africa in Nashville, USA, were thrilled to compete again in the annual Cumberland River Dragonboat Race after a  hiatus of several years. And this time we upped the ante. Kobie Pretorius, the glue that holds our group together, had entered not one but TWO boats: Vuvuzela Gold manned by veterans from previous years, and Vuvuzela Green made up by newcomers and members’ kids who had morphed into teenagers overnight. 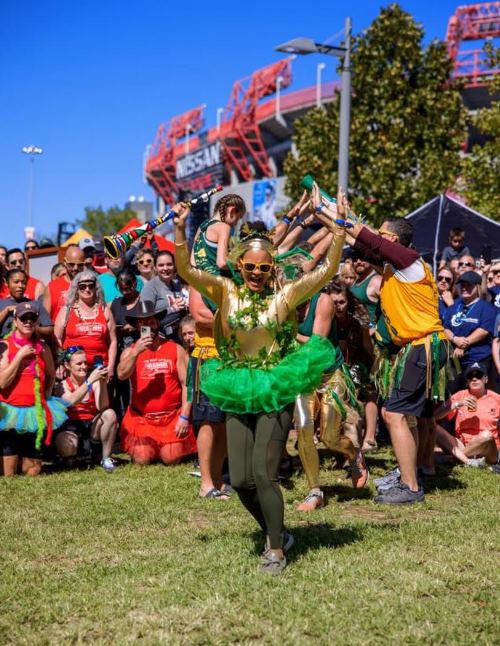 But would we even remember how to paddle? Would we easily rekindle the energy that had won us three – or was it four? –  Spirit Awards in years past? Some pleading phone calls were placed to those of us who had since left Nashville, the author included. I didn’t hesitate one second and booked my flight from Raleigh, NC, as soon as I’d hung up. Werner Willemse and Kassidy Harmon from San Diego, CA did the same. Funnily enough, Werner has never lived in Nashville but joined our cause when looking for fellow South African expats on Facebook, and he has faithfully returned every year to give our team a boost with his long arms and winning smile. 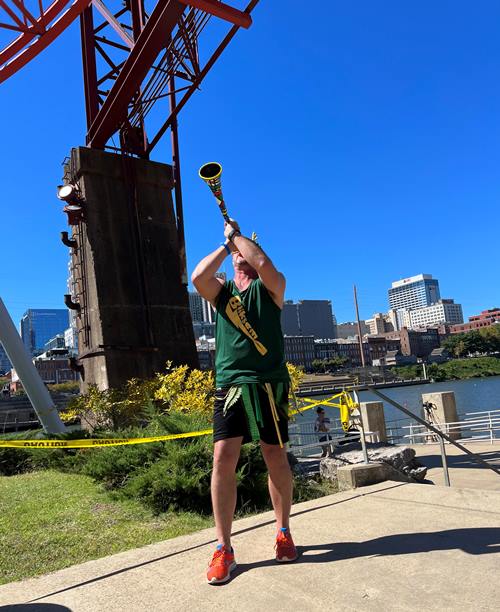 On October 1, 2022, as beautiful an autumn day in Music City as they come, we joined the throng of 30 paddling crews and friends who were assembling beneath Nissan Stadium on the banks of the Cumberland. We decorated our tent, donned our grass tutus, and painted our faces. We waited for the race to start while munching on biltong and Bar Ones donated by our sponsors. Each boat full of 20 paddlers would compete in two heats. The average time of both races would be used to determine the top 12 boats for the final round. 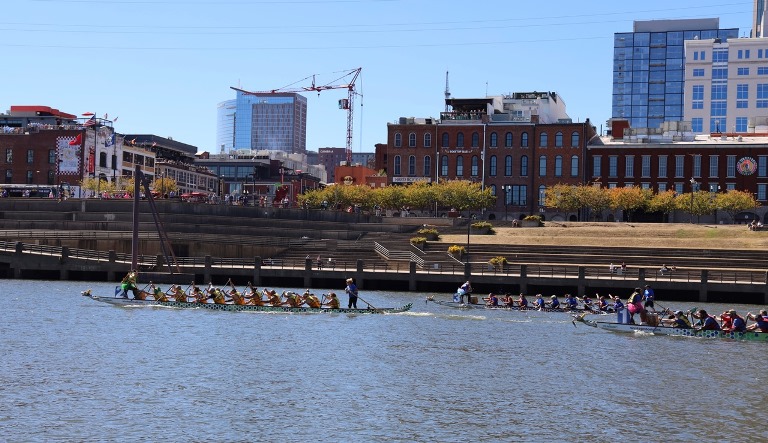 Our green boat went first with 1:04.5. A bit later a shock rippled through the ranks: The “Mekong Dragons” had just clocked in at 52.8 seconds. Never in our years of doing this had anyone broken the 1-minute mark. Who were these people? 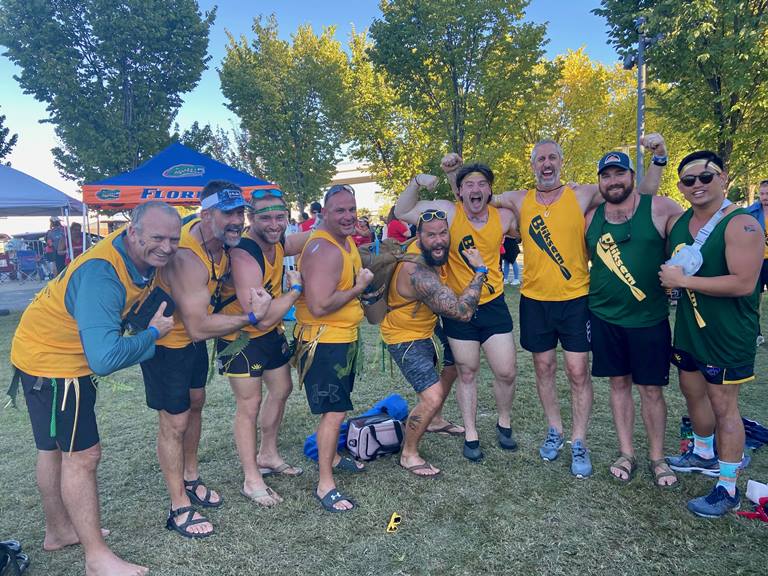 We soon found out when passing them on our way to the dock. They sported custom lightweight paddles, inflatable belted life vests, and personalized non-slip seat pads, and they had brought their own steerer. It was laughable that we – toting heavy utilitarian paddles, bulky (if not to say smelly) lifejackets, and crudely cut carpet pads as seat covers – would paddle against a team like that. We, who did this exactly once per year with a single practice session the night before, randomly assigned a steerer we’d never seen before. How was this fair?

But we shrugged it off, chanted “Vuvu” and “Zela” all the way into the boat, maneuvered it to the starting line, and paddled like we’d never paddled before. This earned us a 58.9 second heat victory far ahead of the other boats. We knew we were in contention with that kind of time. Sure enough, we ended the preliminaries in 3rd place, even though in our second race we had the misfortune of half of our boat paddling to the beat of the drummer next to us rather than our own – a cardinal sin in rowing!

Before the final round began it was time to attend the drummer’s dance competition. All drummers typically dress up in hilarious costumes, perform a show and dance, and receive a vote. And we knew we had the “secret sauce” for this event from previous years: instead of leaving our drummer to fend for herself in the center of a large circle of onlookers, we broke the rules and all ran in together, dancing and singing our hearts out to Shakira’s Waka Waka – which frankly is so long that the dancing was even more exhausting than the paddling! But no one can jiggle and shake and sing like a group of pumped-up South Africans, and so Team Vuvuzela took home the coveted Spirit Award once again.

Soon after, the final round was announced: 3 separate heats of the top 12 boats, the top 4 going last. Our green boat went in the second heat, defending their 5th place. They surprised us all by posting their best time yet with a solid 1:01.5 performance, their fastest of the day – and at this point also the fastest of the finals! All of a sudden, our veteran gold crew felt a little insecure – could our own “greenhorns” have overtaken us?

I don’t think any of us will soon forget that final heat. Waiting on the water doing exactly what our steerer said – hold, one stroke forward, half stroke back – to position the boat and avoid a false start. Blocking out all other noises except for the highly-anticipated “we have alignment,” signalling the imminent blast of the horn. The deep, deep digging of those first 5 strokes. Settling into a rhythm while still keeping an incredibly fast pace, counting out loud even though our breath was soon failing us. Continuing to reach far forward on each stroke whilst our arms wanted to quit in protest. And then the yell of “Finish NOW” from the back of the boat spurring us on to even more reach and deeper digging, as if that were possible. And all the while the formidable Mekong Dragons to our right, first a boat’s length ahead but coming closer with each stroke as we were catching up, propelled by what felt like superhuman effort. 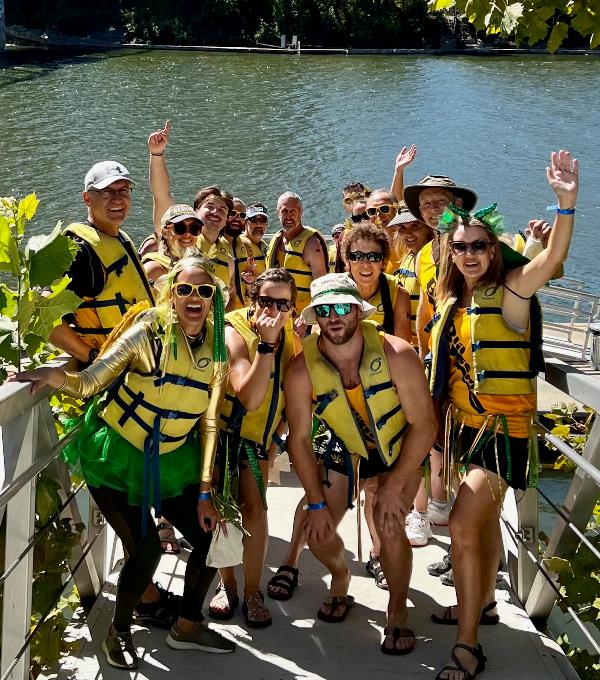 Team Vuvuzela Gold earned a silver medal that day with an all-time personal best 57.7 seconds, only about 2 seconds behind the winning time of 55.6 by the professional paddling crew. And if this wasn’t enough, the look of respect – coupled with a significant amount of relief –  in our opponents’ eyes as they came to shake each of our hands after the race had us float on a cloud the rest of the day.

A silver medal, a fourth place by the green team, and once again a spirit award to our name – it made us proud to represent South Africa that day!

For more on the Friends of South Africa Nashville, see our Jerusalema Dance Challenge story from October 2020.

* Author Sine Thieme and her family lived in South Africa for a few years and became as Proudly South African as the rest of us!