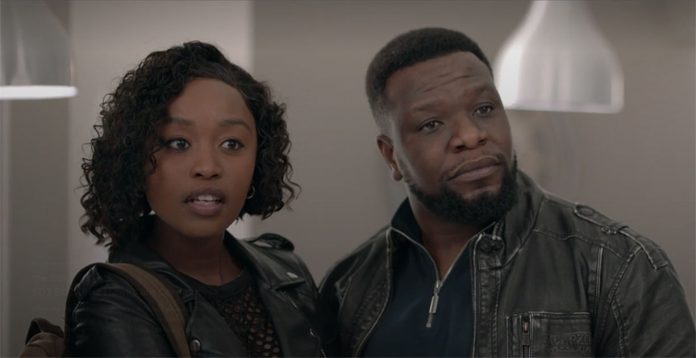 After trending at #1 on Twitter when it launched last Thursday, The Wife S3 has set a new four-day viewing record on Showmax, breaking the record previously held by the multi-award-winning Showmax Original telenovela’s second season.

Early reviews for the third and final season are glowing. Bubblegum Club says, “The Wife sets the tone for a new generation of television-making… impeccable beyond measure.” And Glamour says, “Bottom line is we’re happy our favourite show is back.”

This season has already introduced a number of new faces, including SAFTA winner Wiseman Mncube as Mqhele, taking over the iconic ‘National Husband’ role for which Bonko Khoza won the 2022 Best Actor SAFTA. As Daily Sun says, “Mzansi is head over heels with the new Mqhele. He had huge shoes to fill and people are loving every minute of it.”

You’ll recognise Lungelo as Khethiwe on eHostela, Poppy on Lingashoni, and Ntokozo in Mzali Wam, but you’ve never seen her like this. We caught up with the actress to find out more about her popular role on the smash-hit Showmax Original.

What attracted you to The Wife and made you say, ‘Okay, I’m definitely hopping on to this’?
I mean who wouldn’t hop on to The Wife?

The books were amazing; I read some of them when I was in high school. I love the writing style, the story and its characters.

So I couldn’t miss it. It’s one of those projects you don’t wanna miss. You want to be part of The Wife.

Then I read the bio of Xoli and thought, ‘Oh, God heard my prayer. This is the challenge I needed in my career.’

Tell us about the day you found out you were going to be cast on The Wife. Where were you, what were you doing and who was the first person you told?
I was having a lovely day at my house painting, sipping on some wine and listening to some music. My agent called me and said, ‘Listen, you got the role.’ I jumped up and screamed because I was so excited. I didn’t tell anyone at first as I wanted the news to first sink in and make sure I got a contract and all that. And then of course the first person I told was my mom.

Xoli is a crazy, sexy and wild character. What do you have in common with your character? Are there any big differences?
Oh yes, huge differences!

I’m such a soft girl. If there’s a fight, I will just cry or go home. I don’t want to be part of it. Yet Xoli gets excited if there’s drama. She’s very strong and I love how brave she is. She’s a trigger-happy type of person. She will go shoot before everybody says, ‘Let’s go shoot.’

She’s also sexually free. I’m from a very strict family where when we talk about sex we have to be respectful. Xoli doesn’t. She will do it right here, right now. That’s how freaky she is!

What’s it like working with Sipho Ndlovu as your lover, Sambulo?
I’ve known Sipho for quite some time, because we’re both from KZN. Then I saw Sambulo on the show, who’s completely different from Sipho. It was so great to see someone so dedicated to their character. I told myself: if he can transform into this person who’s completely different from him, then so can I. That kept me on my toes and inspired me to bring out my own character.

What can men learn from a character like Sambulo?
I think they can learn that it’s okay to be vulnerable as a man. It’s okay to show your feelings, to spoil your person and to be down for a person you love.

And also respect your family.

Would Lungelo date a man like Sambulo?
No! Not at all! Someone who goes out and I’m not sure if he’s gonna come back? No, I can’t. This family, I wouldn’t date anyone. Too much drama. [laughing]

What’s working with the Zulu brothers like?
Working alongside the Zulu brothers has been amazing. They are very quick and you kinda have to adapt to it as well. They bring that masculinity. I’ve never worked with a lot of men so closely and I can feel it.

What’s the most valuable thing Xoli has taught you?
That you need to use your brain. Xoli is very smart; she can spot things without being shown. She’s very calculating and streetwise. Sometimes as people we get emotional and we let our emotions control us. That’s not a good way to go about things. Feelings come and go but it’s important to use your brain. As much as people usually say follow your heart, that usually gets you into trouble.

Tell us one thing you did for the first time on the shoot?
Oh, wow. There are so many first times. I shot a gun for the first time. I shot two different guns, a sniper and a handgun. I’ve been doing a lot of stunts, like climbing on walls. Getting bruised and still having to get up and go to work. It’s been such exciting stuff.

Watch highlights from The Wife episodes 1-3:

Watch The Wife on Showmax, with three new episodes launching every Thursday:
https://www.showmax.com/eng/tvseries/illlj7pc-the-wife