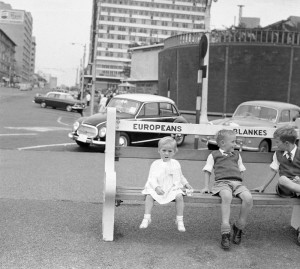 Jacob Zuma’s middle name is “Gedleyihlekisa” which means: “He who smiles while crushing you.” Indeed, South Africa’s president certainly seems to be smiling while crushing the life out of his country. I remember at the age of ten riding up to the grocery store to buy my Mother some milk. On my way I passed a bus stop. There was a black lady standing next to the bench waiting for a bus. She looked tired and I wondered why she didn’t sit down. It was as I rode past that I saw printed on the back of the bench the words EUROPEANS ONLY – BLANKES. That didn’t seem right or fair, I thought, as I pedalled on.

Twenty three years later, in 1994, I stood in the queue waiting to vote. This was the first Democratic election in South Africa. That black lady can now sit on the bus stop bench, I thought. The line went on for several kilometres. But no one complained. Indeed there seemed to be a jubilation among the “Rainbow Nation” that were queuing there that day. Democracy was alive and well and living in South Africa at last! Now we could all move forward.

Certainly with Mandela in power we seemed to do just that. For a while. But time moves on. Sadly Madiba has now gone to a place even more beautiful than the South Africa he loved so much. And we now have the ‘great’ Zuma in power.

And with Zuma the rot began. He smiled… Thirty four South Africans were blatantly shot by the police. Nineteen months later, not a single person has been held responsible for the Marikana massacre. Echoes of Sharpville?! The rot began to fester. And his lips creased into a smile…This is also a country where a state military facility was commandeered for personal use by wedding guests of the president’s friends. Who is in jail for this? Nobody. Thirteen South African soldiers were killed in combat in a foreign country on a still unclear mission. Consequences? None whatsoever. That smiling face broadens in it’s delight….Zuma’s new “palace” cost R246 million. Our money, taxpayers’ money paid a large proportion of this! The smiling face chuckles in its mirth….

”There is something wrong in the state of Denmark.”

And then the Public Protector’s report came out and the smiling has paused.

Thuli Madonsela (the Public Protector) is a woman respected by both black and white people, rich and poor. She runs an efficient office and has always been a person we can look up to and believe in.

And the report was damning. For Zuma. For the corrupt officials in the ANC. And consequently for the ANC as a whole. A dear friend, Steven Stead, wrote this on Facebook:

I have not been so deeply moved by anything in South African politics since the inauguration of Nelson Mandela as our first black president, as I have been today at the courage, integrity and sacrifice demonstrated by the Public Protector, Thuli Madonsela. A loyal ANC supporter, and a proud South African citizen, she has had the grace and bravery to look the present government in the eye, and speak the truth, without malice, without arrogance, without the hope of personal gain. Her disclosures will surely cost her exile from the protection of the party that she is loyal to and which sustained and appointed her. And yet she didn’t flinch, just spoke her truth in that tightly controlled, husky voice, that speaks subliminal volumes of the pressure she has been under and the personal pain of having to reveal the failings of our president, and his closest political collaborators. My heart burns for her. I am so grateful. She really is the people’s champion. And what does she get in return from the ANC for this staggering act of selfless bravery? Her findings are dismissed. No apology or restitution will be issued. All will continue as normal…

Recently I was watching the investigative television programme, ‘Carte Blanche’. They were interviewing teenagers who were able to vote for the first time in the “Rainbow Nation”. They were known as the Born Frees! I was amazed at the general feeling of malaise amongst everyone. Their attitude seemed to be one of: “Why should I vote? Parties promise one thing and then you get another.”

It was not a case of which party you liked the most but rather which party do you dislike the least! There was a cynical appreciation that parties made vast promises and then reneged on their promises when elected. I am thinking of how the Born Frees must view Zuma. They see this incredible 246 million rand mansion surrounded by a district crying out for clean water and electricity!

“I, Jacob Zuma, solemnly swear that I will observe and maintain the Constitution of the Republic and I solemnly and sincerely promise that I will always promote all that will advance the public, and oppose all that may harm it.”

I want to laugh out loud and at the same time put my head onto my arms and cry. Cry for our beloved country. But that is futile and non-productive. So what can I do? How can I help South Africa de-throne this Zuma tyrant and despot? I can do what I do, which is write this blog. But, then I am already preaching to the converted, aren’t I? So, to all of you that read what I have written, we need to spread the word. Laugh, I sound like an evangelist, don’t I? But it is only by speaking to people whom we don’t normally engage with about the corruption and misappropriation of public funds, that the groundswell of public opinion will change. People are often caught in the background of their history. They need to be revitalised by the knowledge that things can be transformed for the better. This is the way in which you and I can help change come to South Africa.

Thuli Madonsela has started the ball rolling. It is up to us to kick it up the field and literally fly with it!

And…I am whispering Madonsela for President.