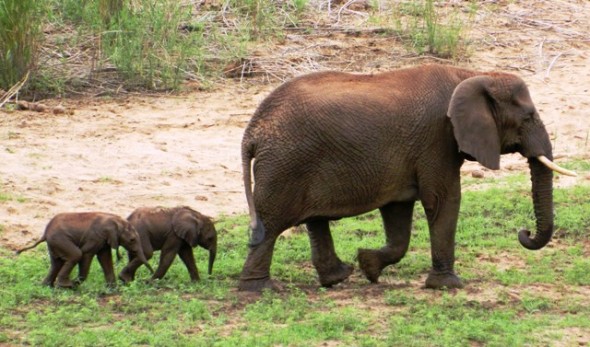 The rare and adorable twin elephants that were born in South Africa last week have provided a feel good ‘Christmas miracle’ story in times of Eskom-generated darkness. The twins, who were born on Thursday at the big-four Pongola Game Reserve in Northern Kwa-Zulu Natal, have not yet been named as experts have given them their space, and therefore been unable to determine their sex just yet.

The birth of the elephant twins is an extremely rare event with scientific evidence showing there is a less than one percent prevalence rate of elephants twinning.

Sadly, there is even less of a chance that both twins survive into adulthood…which means the birth of these young elephants is an incredibly special natural occurrence. And this is why the twins’ gender has not yet been identified, as they and their mom Curve are given as much space as possible to ensure they can be properly nurtured.

The Reserve is doing all it can to make sure that thirty-one-year old Curve (who was named after a curve in one of her tusks) is given as much of a fighting chance as possible at keeping her offspring healthy and alive, and beating the extremely high mortality odds for young elephant twins.

“Though a few cases of twinning have been reported in the Kruger National Park, an examination of the reproductive tracts of over 1200 adult cows culled in the Kruger National Park (KNP) during population control operations did not yield a single case of twins,” he says.  “An earlier study published by Smuts in 1975 found two sets of twins among 353 embryos examined which is a 0.5% prevalence.”

Within the greater Pongola Game Reserve,  7200 hectares is owned and managed by the Landman family, whose original family members arrived and settled in Africa in 1735.

The newborn twin elephants are most likely going to be named after Mr Landman’s eldest son’s twin daughters whose birth coincided with the elephants. Their names are Leah and Linelle Landman. (‘Tis the season for twins…as South African Princess Charlene of Monaco is due to give birth to twins any day now as well!)

Paternity of the elephant twins points to Ingani, a 44-year-old elephant bull that passed away just over a year ago. (Remember an elephant’s gestation period last approximately 21 months!)

Dr Whyte confirmed that giving Curve and the twins some space right now “is the best approach.”

He said “mortality of one of the twins usually occurs as the increasing demand for milk by two calves cannot be met by the mother, and the less dominant of the two calves usually cannot gain access to its share.

The Pongola region has had well-established population stabilising measures in place for elephants since August 2008, including vasectomies as well as Gonadotropin-releasing hormone (GnRH).

Against these odds, the elephant twins were safely birthed…which is surely a positive sign for them to enjoy long and healthy lives.

To find out more about the Pongola Game Reserve – please visit www.pongolagamereserve.co.za