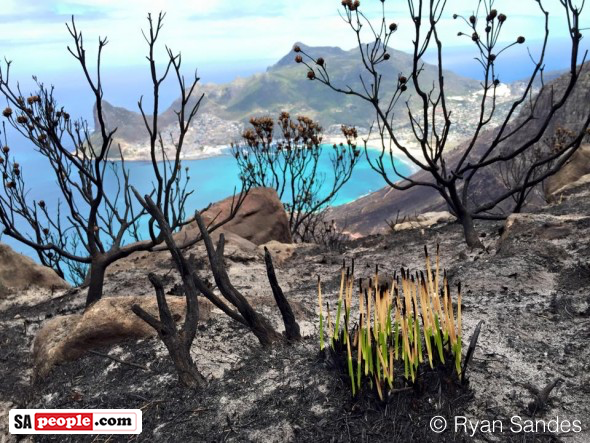 Less than a week after fires ravaged mountain slopes in the Western Cape, new life is beginning in the midst of the devastation…as shown by these photos taken a couple of days ago by South African trail runner Ryan Sandes. Sandes took the photos during a “morning adventure” up Black Burn Ravine. He said that after it was burnt by a “hectic” fire just days ago, “it is really inspiring to see how quickly Nature grows back again.”

Fires are important to fynbos which can become “moribund” and result in extinction if they do not burn within every 20-30 years.

According to Table Mountain National Parks (TMNP) fynbos is a fire-dependent vegetation that needs to burn around every 15 years to stimulate new growth and ensure that plant and animal communities remain healthy. Sometimes the vegetation is deprived of that beneficial burn because fires are extinguished due to their close proximity to human settlement and homes.

TMNP also points out however that when areas of the Park “experience fire too frequently due to human intervention” this can also be destructive to the ecosystem because when young fynbos (fynbos that has not yet reached seed-bearing status) burns, seed banks are depleted which can change the diversity of plant species in the area, e.g. more grass species, which could result in even more frequent fires.

Just this week Cape Nature expressed concern about the #JonkershoekFire near Stellenbosch where over 2,900 hectares of alien vegetation and fynbos were burnt. Since the last fire was only in 2009, that has not been long enough for the fynbos species in the area to produce enough seed to sustain the population after the fire.

In 2010 Sandes became the first runner to have won all four of the 4 Deserts races (250km trails through the Atacama Desert in Chile, the Gobi Desert in China, the Sahara Desert in Egypt, and Antarctica).