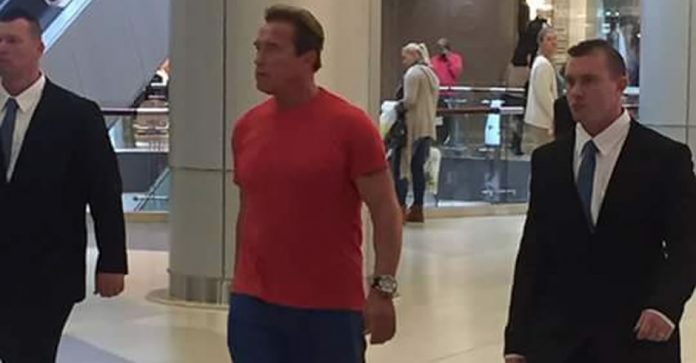 Hollywood star, seven-time Mr Olympia and former Governor of California  Arnold Schwarzenegger was spotted strolling through Sandton City this afternoon. He’s in the country for the inaugural Arnold Classic Africa 2016 which is showcasing some of South Africa’s top boxing talent along with 46 other sports codes. (UPDATE: Watch Arnold Schwarzenegger gets chased by elephant on safari in South Africa.)

The three-day event at Sandton Convention Centre will host six fights, including three title fights that will be contested over the 10 rounds.

The tournament will be headlined by Patrick Malinga and Ashton Whiteboy for the vacant World Boxing Association (WBA) Pan-African interim lightweight title.

Featured attractions on Friday include bouts for the WBA Pan-African interim middle and bantam weight fights.

Boxing promotor Kaya Majeke said: “We are celebrating the All-Africa month coinciding with the Arnold Classic, and we are positioning Gauteng as a good province for sport.” The Arnold Classic was first launched in the US as a professional bodybuilding competition in 1989 but has since expanded to create an international series of multi-sport festivals, driven by Arnold Austrian-born Schwarzenegger.

The multi-sport festival includes a three-day Health and Fitness Trade Expo, with 30,000 people expected to attend the event, including around 10,000 athletes.