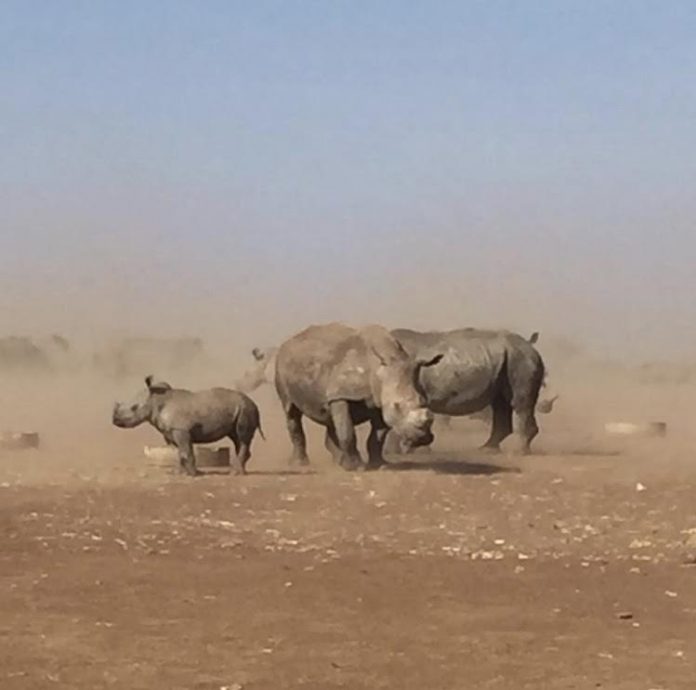 The rhino horn is the conservation ‘Horn of the Dilemma’… According to UK museum keeper Paolo Viscardi: “A rumour that Traditional Asian Medicine containing powdered rhino horn could treat and prevent cancer (has resulted in), aside from the poaching of rhinoceros, the black market interest in taxidermy and cultural artefacts made from rhino horn (and) in the theft of material from museum collections.”

As reported by SAPeople in February 2016, a retired South African man – Ray Dearlove -plans to fly 80 rhino, at a cost of over AUS $60,000.00, to his adoptive Australia to protect them from poachers.

The World Wildlife Foundation encourages people to ‘adopt a rhino’ – a $25 to $250 donation can buy a ‘rhino adoption pack’ complete with a fluffy toy and a species card.

Save the Rhino, The International Rhino Foundation and Care for Wild Africa are all trying to educate the world and find ways to protect the rhino for future generations.

Sadly, the worldwide education and demand-reduction schemes do not seem to be working quickly enough, and some are losing patience.

Last month, I too found myself in ‘save the rhino’ territory.

A dry and dusty drive took my sister and me to a private rhino reserve in Gauteng. We had just co-written a script for a TV documentary about rhinos and had come to witness the rhino rescue operation at John Hume’s reserve.

We were not the only people interested in his ambitious plan to save the rhino – an American film crew had been filming there since dawn.

John Hume is not only a rhino breeder with the largest population of rhino in the world, but also a vociferous campaigner for the legal trade of rhino horn.

From my safe vantage on the back of a truck, under the spell of the South African bushveld, I watched the release of over 20 rhino into Hume’s private reserve. Whatever side of the debate you are on, it’s hard not to be wowed by the scale and commitment of Hume’s operation, which many will acknowledge, has been a personally expensive and selfless undertaking.

The Debate: Should the global trade of rhino horn be legalised?

Just one month later I found myself in another lofty place in an auditorium at the Royal Institution of Great Britain in Mayfair. The occasion: a debate. The motion: ‘This house believes that the global trade of rhino horn should be legalised.’

The debate set John Hume, retired South African property developer turned rhino breeder, against Born Free Foundation’s President and CEO, Will Travers (OBE), who has made wildlife conservation his life’s work since living in Kenya with his parents, Bill Travers and Virginia McKenna, during the filming of Born Free (1966).

Dr Craig Packer, an Ecology professor at the University of Minnesota, who served as field assistant to Jane Goodall in 1972 while she conducted research on chimpanzees, chaired the debate.

Packer gave statistics and some background on similar debates for other endangered species – vicuñas, ostriches, crocodile and turtle.

“There was permission given to the two Southern African countries in 1999 to sell ivory to China,” cited Packer. “Shortly thereafter, the sale led to a spike in elephant poaching which has continued to accelerate ever since. So there does seem to be some evidence with ivory that (legalisation) did have the unexpected effect of increasing demand.”

International trade in rhino horn has been banned under CITES (Convention on International Trade in Endangered Species) since the 1990s and also within South Africa since 2009. Since then, poaching has reached an all time high with more than 1,300 rhino poached in 2015. The next CITES World Wildlife Conference will be held in Johannesburg on 24 September. At CITES, Swaziland will put forward a proposal to legalise the global trade in rhino horn.

As John Hume and Will Travers outlined their views before a large audience, it was clear that both men love Africa, her wildlife and both care about the welfare and future of her rhinos.

“Mr Hume’s desire,” began Will Travers “and we share one common factor – we both want there to be lots of rhino in the world. His desire to open up trade is based on a series of dangerous assumptions about markets, prices and demand. The very fact that we are debating the possibility of a future legal trade in rhino horn will bring hope to the poachers.”

Travers noted that after extensive research, South Africa will not put forward a proposal to legalise the sale of rhino horn at CITES in September. “Swaziland’s plans to re-open a legal rhino horn trade can only succeed if they are approved by two thirds of the parties at CITES. That is not going to happen.”

John Hume’s argument was deeply personal: “I beg of you, let’s end the war on the trade in rhino horn. It has only resulted in the killing of game rangers, poachers and the decimation of the rhino population.”

Many private rhino owners hold this view. The argument is that unlike elephant ivory and pangolin scales, rhino horns can be trimmed without injury to the animal. Hume and many like him already remove their rhino’s horns making them uninteresting to poachers. Now they sit with stockpiles of horn, which they say, could be sold and the proceeds spent on rhino protection and breeding programs.

If not through legal trade, “how else can (rhino conservation) be funded?” Craig Packer asked in the question time.

Will Travers pointed our that South Africa plans to announce a conservation fund in October, which could generate up to USD 40 mill per year. “That is not supposed to entirely replace the commitment of the government towards private breeders such as John, but to augment the costs of protecting their rhino. The grass roots movement of African people who care about Africa’s wildlife, supported by the international community who share these values, are making a real and profound difference.”

“But legal trade is sustainable,” insisted Hume. “There are currently 6,200 privately held rhino in South Africa. These have the potential to breed 550 rhino per year. I have 30 tons of horn. The government has 5 tons. If we sold sustainably, 6-8 tonnes a year, that’s more than what is poached in a year.”

Others, like The Bornfree Foundation, worry that this would serve to increase demand for horn and that making trade legal, might give legitimacy to its unproven medical benefit.

“I think it’s a huge assumption that the entry of legal rhino horn into the marketplace is somehow going to magically replace illegal,” said Travers.

“Poachers and criminals syndicates are entrepreneurs. They will take advantage of any opportunity to make money. If you’re selling it at 30,000 a kilo, they will sell it at 25.”

The debate quickly became decidedly heated and emotional when a few members of the audience – I’m sorry to say South Africans – began shouting out during Will Travers’ speech, then became even more bolshie and belligerent during the questioning.

Craig Packer tried to steer the discussion in a diplomatic fashion, but was not entirely able to keep the rabble at bay.

“Zoos and ranches will become the last physical reminders of what life on earth once looked like and what we have squandered and destroyed in pursuit of mammon rather than served and protected as part of our stewardship responsibilities.

“We have a choice about the future we wish to see. I ask you to vote wisely and overwhelmingly, if not unanimously, against the motion. In doing so you will also be voting for a more compassionate, humane and responsible future,” Travers concluded to much applause.

A poll of the audience at the end of the debate showed a 60% majority would vote against the legal trade of rhino horn.

Video by Sandi Durnford-Slater – “The video is of the release of a new mother and baby rhino on John Hume’s reserve, which my sister and I witnessed while in South Africa.”