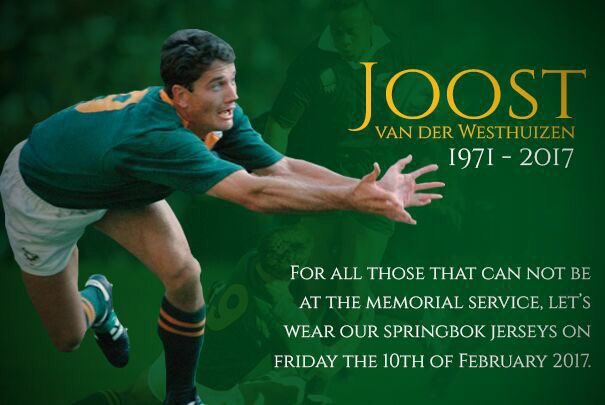 South Africans in SA and around the world, who cannot attend the public memorial of former Springbok captain Joost van der Westhuizen, are called on to wear their Springbok jerseys on Friday.

The memorial will be held at Loftus Versveld (Kirkness street, Pretoria) at 12h30pm on Friday 10 Feb 2017.

For those who cannot attend, but would like to pay tribute to Joost, they are urged to paint the world green and gold on Friday. Wear a rugby jersey, or even just green.

Feel free to send any photos to SAPeople of yourself – wherever you are in the world, paying tribute on Friday. Send to admin@sapeople.com or inbox us at www.fb.com/sapeople (thanks!).

The legendary rugby player who fought for South Africa on the field, and courageously for his life off the field, passed away at the age of 45 on Monday 6 February, after a long struggle with amyotrophic lateral sclerosis (ALS), a form of Motor Neurone Disease (MND), for the past six years. He leaves behind his two children, Jordan (13) and Kylie (10), as well as his father Gustav, mother Mariana, and brothers Pieter and Gustav.

Many of Joost’s fans are not only South African. Hugh Laurie from ‘House’ fame tweeted a beautiful tribute (about Joost being so excellent, he was more like a ‘dagger than a thorn’ in the side of English players), and an expat’s husband – Richard Skalski, from Texas – left this tribute on Facebook: “I became a Springbok fan when I married the love of my life Fatima who is a South African native. I learned the game watching the great Joost play and had the honor of meeting him when the Boks came to Houston for a match against the Eagles. A great player and even greater gentlemen. I can not imagine anyone else as the number 9. God rest.”