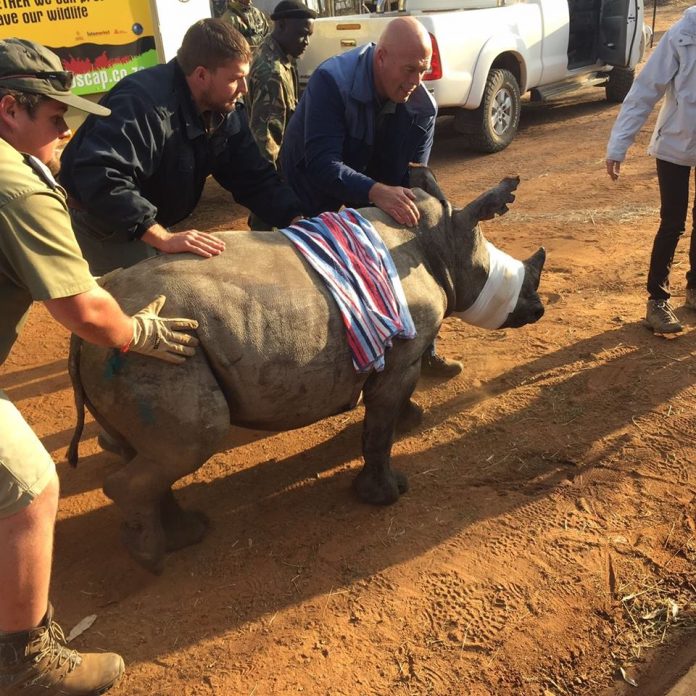 A new wildlife organisation has launched with the ambitious aim of saving every single surviving rhino or elephant victim of poaching. It’s called The Now or Never African Wildlife Trust (NNAWT)… and it has search giant Google on its side! NNAWT brings together key players – with extensive experience and contacts – in the war on poaching, with a masterplan to create 10 safe havens across Africa, a network of specialist care centres, and rapid reaction rescue and veterinary teams.

At the Trust’s launch in Johannesburg on Wednesday, they said time is of the essence, and their mission is to save the rhino.

The alliance crucially includes as one of its co-founders, a representative from Google – Thomas Ropel – who has a passion for Africa and conservation. Thomas, who works at Google in Germany, appeared at the conference via satellite. He says the search engine has committed to assisting this endeavour by way of their Non Profits Assistance (which includes creating awareness within targeted groups, as well as Google Ads and YouTube video payments going to the non-profit charity).

Thomas says: “We spent more than a year setting up and creating our vision, planning… and now we are ready to start. We absolutely believe that we can achieve what we say and we have already reached out to many of those we will need to partner with to achieve this.

“Our first tactical goal is to fund two helicopters on 24-hour standby in key areas to assist existing organisations to save more injured and orphaned animals.

“The first 24-hours is crucial and we need to reach more animals more quickly.”

Many orphans succumb to starvation or die of wounds inflicted by the poachers, or by lions or hyenas, before rescuers can find and get to them.

Apparently in the Kruger National Park there are as many as seven to 15 gangs looking for rhino on a daily basis! The priority after a poaching incident, is usually to track the poachers immediately… and so sometimes a calf is only located hours or days later… by which time it’s often too late. Therefore NNAWT’s goal will be to have a helicopter on standby 24/7 for the sole purpose of searching for and rescuing that calf. Currently helicopters have to be leased.

According to Thomas, only 10 to 20% of the rhino calves that are orphaned at the moment are able to be saved. Many fantastic individual organisations are working hard for the rhino… but NNAWT believe that’s what’s needed is to work closer together to ensure a more globally effective and lasting solution.

Petronel Nieuwoudt, founder of Care for Wild Rhino Sanctuary NPC, says that unofficially many orphanages do call each other to share information about the care of the babies.

But by officially combining forces, this group will now be able to make projects happen which would be too big for any one small individual organisation.

And now, says Thomas, they “have the operational support, access to the choppers, pilots and the bases… we just need the funds.”

The NGO (non-governmental organisation) is hoping for donations from overseas sponsors and caring individuals, as well as corporate support as soon as possible.

Founding members of NNAWT’s Board include:

NNAWT’s mission is dynamic and simple:

Board chairman, Dex Kotze, says marketing and fundraising starts now with the aim of raising the money to do the job.

He says: “Our ambition is great but our commitment is total… We have secured two stronghold reserves of over 30,000 hectares for eventual release when the orphans are old enough.”

The group also has education at its core and has already started visiting rural Limpopo schools, with the aim of educating children who in turn educate their parents about conservation. Youth4African Wildlife discovered after visiting two large schools next to the Kruger, that out of 500 children none of them had ever been into the Kruger or seen any rhinos or other big game. These children are apparently very keen to learn and about 60% are on Facebook (with cellphones) so they can spread the word.

Now or Never has launched a website and range of social media platforms, and a Google Ads campaign sponsored by Google itself.

Ultimately other organisations will be able to apply for funding that helps NNAWT achieve its goals – especially new safe havens and tactical assistance for rescue and rehabilitation. Now or Never will combine forces, by pooling resources and skills from different aspects of working against rhino poaching, and a central fund management… in order to tackle this massive problem together with one cohesive unit driven by passion – to save the rhino – and enabled by a big solution offered by Google.

It couldn’t come too soon. A fortnight ago, 23 rhino were poached in 7 days in South Africa!

And it appears the elephant, which until fairly recently was ‘safe’ in South Africa (whilst being poached to death in other parts of Africa) is next. And then the lion…

It’s for this reason that Kenya’s Tsavo Trust is involved too… thanks to their experience with rescuing elephant calves, which are harder to save than baby rhino, due to their physiology and stress/trauma reaction. The group will initially focus on South and East Africa.

With a French zoo recently being hit, and Thula Thula rhino orphanage being attacked, security will definitely be one of the areas to receive funding.

As the Rhino Orphanage’s Arrie van Deventer said: no one person, organisation, or country can save the rhino – it needs a massive cohesive effort; and we must take hands and do it as a combined unit.

We wish this group all the best.

At the press conference their dedication and passion was evident… with Johan, Petronel and Arrie admitting they have their phones on all the time because they can get a call any time of the day or night, weekend or Christmas Day… and they have to go! The rhino comes first.

This is a team that is dedicated and passionate, and like the Duracell battery… they have the limitless energy and drive to fight for the survival of every rhino orphan.