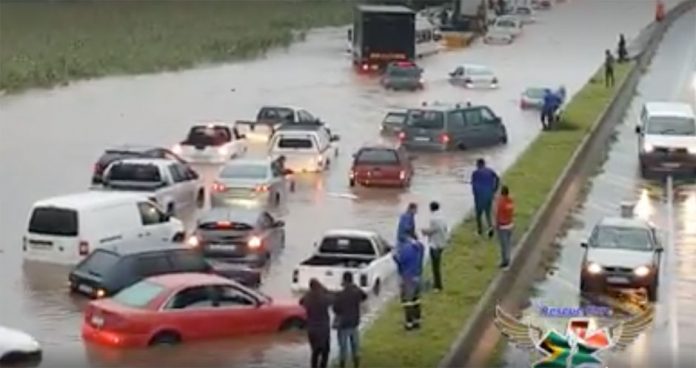 DURBAN – The river has broken its bank at the N2 Southbound near NATCOS and is washing away vehicles on the N2 motorway, according to eThekwini Municipality, in the latest on the terrifying #DurbanStorm.

Strong and dangerous winds of over 70km per hour (some say over 100km) have lashed the coastal city and south coast of KwaZulu-Natal, South Africa. Over 100mm of rain has reportedly fallen in the past 24 hours.

The Durban Municipality says the Umbilo River has risen from 2.2 to 3.6 metres.

Rescue Care Paramedics are being kept extremely busy with footage below showing brave fireman Justin Bateman and paramedics Ceron Lennon and Ian Wessels rescuing three people from a bus, trapped by the floods on the M7 just after Sarnia, before the South Coast Road.

One policeman has tragically been killed after a container fell onto his police vehicle in Maydon Wharf. Garrith Jamieson, from Rescue Care, said: “Unfortunately one policeman passed away and the other policeman was extricated.”

Schools have been closed; flights delayed; and five hospitals have been damaged by the floods, including King Edward VIII Hospital. Durban Yacht Harbour experienced great damage with boats breaking away from their moorings and colliding with each other. The Harbour entrance has apparently been closed after a 300m ship was blown sideways, blocking the entrance.

ER24 paramedics say they have responded to several calls for assistance – “Some of the incidents include containers that fell from a truck onto a vehicle near Rotterdam Road in Bayhead, a family was trapped inside their home when it flooded in Barlew Mews, an ambulance overturned leaving two medical crew injured along the N2 in Umgababa, two taxis collided in Magabeni and several other distress calls.”

The Disaster Unit is monitoring the possibility of more heavy rainfall later today at 15h00. Durban residents are asked to limit their outdoor movements.

Our thoughts and prayers go out to those trapped in these conditions, and THANK YOU to the brave rescuers and police officers doing all you can to help.

Update 15h15: The N2 is now cleared and traffic is flowing!

P.S. There was no tornado or ‘Hurricane Sifiso’ in Durban! That was a Whatsapp hoax.

We encourage residents to avoid circulating old images of floods. Do not panic. Please stay indoors until the storm passes. #DurbanStorm

People trapped in their vehicles on the M7

People are trapped in their vehicles on the M7 #DurbanStorm

The #DurbanStorm has flooded the N2 northbound.

Why does Durban always get everything after Jozi? #krispykreme #starbucks and now even the #storm

My heart goes out to all the homeless people and people in the squatter camps. Praying God shelters them during this storm. #durbanstorm