Sometime back in 2003, I was standing toe-to-toe with a Sutherland sheep farmer after his deeply rutted middelmannetjie road had nearly ripped the guts out of our little low-slung sedan… writes Chris Marais.

We’d come to do a magazine story on some aspect of the guy’s farming enterprise, but the issue of his bad road took precedence and we ended up yelling at each other. As much as I hate to admit it, he had the last word:

“Get yourself a blerry bakkie, man!” he shouted as he turned and stormed back into the shearing shed.

In the spring of 2004, after much plotting and planning, my wife Jules and I drove out of Jo’burg and headed west on the N14 towards Upington, where I bought a second spare wheel.

We were taking on Namibia for three months, from toe to nose: entering the southern border at Noordoewer in mid-August, we finally left this marvellous blonde country via the Caprivi Strip in mid-November.

KB and the Desert

We were two books richer. There had been no flat tyres and no mishaps except for the temporary loss of keys in a big rocky outcrop near Keetmanshoop called The Giants’ Playground. The bakkie had growled its way perfectly across most of Namibia on the road trip of our lives.

We wrote A Drink of Dry Land – Journeys through Namibia and, soon after, we compiled Namibia Space, an accompanying photographic coffee table book. Having this bakkie had made us brave.

It was no real challenge then, to propose the next great mission to Struik (now Random House), our publishers at the time: a three-month journey around the entire coastline of South Africa.

The Namibia travel books had hardly hit the shelves when we were already sitting up at Alexander Bay, the bakkie’s nose pointed south. We took a deep breath, buckled up and began another adventure.

It was less challenging for the bakkie than for us, this time around. Most of the roads we traversed were sedan-friendly, so the bakkie became more of a people-mover. Especially when we ended up in a wall of fire on the N2 outside Storm’s River and had to rescue a dazed and desperate group of mill workers from the blaze and the accompanying smoke.

That trip yielded two more books: Shorelines – A Journey along the South African Coast and Coast to Coast – Life along South Africa’s shores.

It suddenly felt like we had two existences: one behind a computer writing a book, the other behind the wheel of our Isuzu KB on the hunt for a tale to tell. Little did we know that this would become the story of our lives – at least for the next 15 years.

The year 2006 saw us take on southern Africa in a big way, with extended trips into Lesotho, Swaziland, Botswana and Mozambique. We used the diff-lock facility only once, in the deep clay of a Lesotho mountain road after a rainstorm.

But a gaggle of young herders appeared, heaved us out of the clinging mud, jumped on the back and sang with gusto as we drove to the nearest village to buy them all treats at the trading store.

In 2007 the bakkie, Jules and I came to live in the Eastern Cape Karoo river town of Cradock. It was the Big Move of our lives, and one of our first local connections was with Andre Conradie, service manager at CAT Delta (now CAT Motors). Andre and his team have serviced our KB for the past 12 years, carefully prepping the vehicle before every long trip we take into the Karoo.

We were now branded as Karoo Space and publishing independently, beginning with the bestselling Karoo Keepsakes and following a few years later with Karoo Keepsakes II. After that came Road Tripper – Eastern Cape Karoo and Moving to the Platteland – Life in Small Town South Africa.

Our print magazine client, SA Country Life, became a great promoter of the Karoo and so we could plan long trips to the little towns of the region and supply them with regular features.

The bakkie then took on the brand name flashed across its canopy: Karoo Space. It became known all over this vast region, from Richmond to Riemvasmaak, Springbok to Somerset East.

We had, in the meantime, become Karoo Smouse, in the tradition of the old Jewish traders who used to traverse the dry country. Before a trip, the bakkie would first be loaded with book stocks to drop off at all the little padstalle and out of the way coffee shops in dorpies you probably never heard of.

The Karoo Space bakkie also made a new friend, in the form of a long-haired German Shepherd called TwoPack. Our new dog came to regard the back of the bakkie as his personal fiefdom, his safe place, over the years.

We have ventured deep into the khaki mountainlands of the Richtersveld and followed the great floods of 2011 from Gariep Dam right across to Kakamas, where the river roiled in the desert like a fat python, restless and deadly.

We have taken on the mountain passes of the southern Drakensberg and the Klein Karoo, with the bakkie relentlessly growling its way through all conditions and obstacles.

We have seen the Karoo in times of plenty and, like now, in desperate times of drought. We have prayed with the farmers of the Hard Man’s Karoo, partied with the youngsters at the AfrikaBurn events, sung at huiskonserte in the strangest little spots, driven through the blizzards of winter and endured a blistering sandstorm in the Kalahari.

“Aah, the Karoo Space bakkie!” a padstal owner in the middle of nowhere would exclaim, as she gifted us a couple of meaty pies “for what you do for the Karoo”. To Jules and me, this was far more rewarding than any of the journalism trophies we won back in our city days. The Isuzu KB had become the third essential cog in the Karoo Space wheel.

In our 16-year relationship with the vehicle, we have come to know many mechanics across the Karoo via: a clutch plate in Uniondale, a battery in Williston, a wheezing fuel pump in Willowmore. They all love to work on the old KBs, which they regard as “legend bakkies”.

The other day an old buddy asked me about mileage.

“It’s not the years, boet. It’s the road you took to get there,” I replied.

“And now?” was his next question.

Story and pictures by Chris Marais

View the original (and many more awesome stories) on karoospace.co.za. You can also buy their fabulous book Moving to the Platteland. 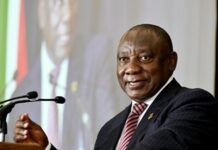 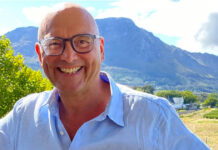 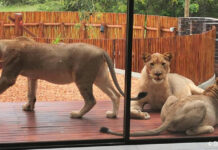