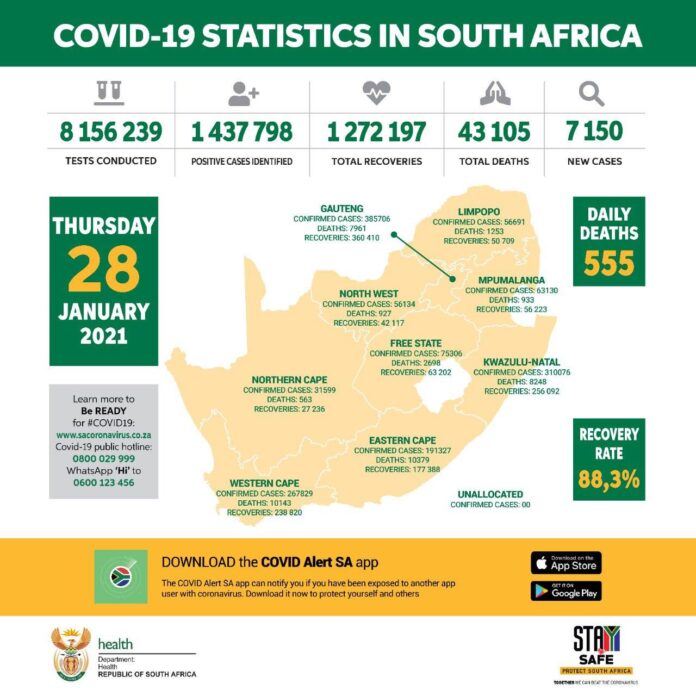 COVID-19 has now killed more than 43 000 people in South Africa after 555 more patients succumbed to the respiratory disease on Thursday.

According to the Health Minister, Dr Zweli Mkhize, 249 fatalities were recorded in KwaZulu-Natal, 150 in the Eastern Cape, 70 in Gauteng, 45 in the Western Cape, 21 in Mpumalanga and 10 in Free State.

Seven were recorded in Limpopo and three in the Northern Cape, which pushes the death toll to 43 105.

“We convey our condolences to the loved ones of the departed and thank the healthcare workers who treated the deceased patients,” said Mkhize.

The country now has 122 496 active cases, with four provinces being the hardest hit.

According to the World Health Organisation, there are now over 100 million confirmed global cases of COVID-19, including 2 166 440 deaths, to date.

According to the South African Medical Research Council (SAMRC) during December 2020 and January 2021, the numbers of excess deaths increased relentlessly as the second wave of the pandemic unfolded in each province.

However, in the most recent week, there has been an apparent decline in the surge of excess deaths in South Africa.

The council regularly publishes the report on weekly deaths in South Africa, including both natural death caused by diseases and other medical conditions and unnatural deaths registered on the national population register.

“These are used to estimate the actual number of deaths that have occurred in the country and calculate the number of excess deaths over and above the numbers that would be expected had the historical mortality trends before the COVID-19 pandemic continued,” SAMRC explained.

According to SAMRC’s Chief Specialist Scientist, Professor Debbie Bradshaw, the timing and geographic pattern leave no room to question whether the spike in excess deaths is associated with the COVID-19 pandemic.

“Unfortunately, it will probably be some years before we have the information about the medical cause of death and so we cannot distinguish between deaths directly associated with COVID-19 and those that may have resulted due to the health system being overburdened,” said Bradshaw.

“While we are cautiously optimistic that the decrease in week three represents a real change and indicates the turning of in excess mortality in the current wave of the pandemic, the trend will become clearer with the data for week four, to be released by the SAMRC on 3 February 2021.”

“The team is collaborating with the Department of Health and the National Institute for Communicable Diseases to set up a data linkage project to improve the reports of the numbers of confirmed COVID-19 deaths for the country,” Gray added. – SAnews.gov.za