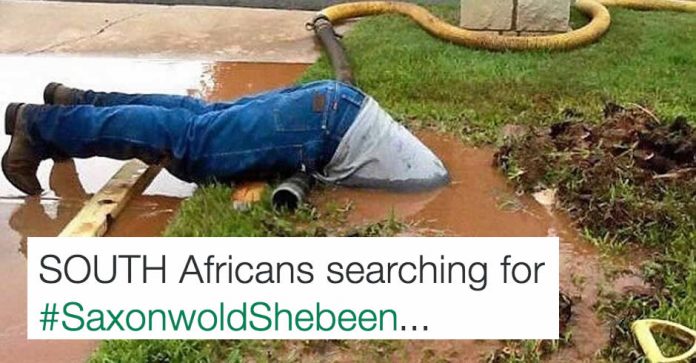 After Eskom CEO Brian Molefe made light of his alleged 19 visits to the Gupta Family residence in Johannesburg suburb Saxonwold, Twitter exploded. Molefe said “there’s a shebeen” (to explain his phone records showing he was in the vicinity). Twitter replied with #SaxonwoldShebeen and #PhuzaThursday, displaying some of that fantastic South African humour we love.

As one Twitter user, Ashleigh Tordiffe, said: “Just the fact the there is an actual #SaxonwoldShebeen hashtag makes me #proudlySouthAfrican. Man, but I love this country!”

Here we go. Some of the best #SaxonwoldShebeen tweets:

When a new bouncer at #SaxonwoldShebeen doesn't know you are a friequent customer and asks for ID pic.twitter.com/ywsLgjtjKO

When you realise that you frequent that area but nobody ever bothered to invite you to #SaxonwoldShebeen pic.twitter.com/T8IgsjA5Kh

I don't always buy presidents… but when I do, I buy his son, the minister, a parastatal CEO and the parastatals board #SaxonwoldShebeen pic.twitter.com/ggV0NTlpNb

When you realise you've made a mistake and leaked the location of an unknown drinking spot #SaxonwoldShebeen pic.twitter.com/adZsK9KuRN

We have the best food, friends and fun time! Bring your own suitcase at the #SaxonwoldShebeen pic.twitter.com/GoI9WTjsmy

This is what happens to people who drink in #SaxonwoldShebeen and thereafter eat curry with Guptas. So we advise that people must stay away. pic.twitter.com/r5y8SnWav1

"Don't forget the bring and bribe later on at #SaxonwoldShebeen nhe" pic.twitter.com/QHYxDzBpA8

What happens when you go to work after a heavy night at #saxonwoldshebeen pic.twitter.com/2fokE7f6uX

Could you please let patrons know that the wifi password today is "crybaby"? Thank you. #SaxonwoldShebeen https://t.co/3nHRDwc2gc

"I'll have two indictments and a subpoena, please. On the rocks." #SaxonwoldShebeen https://t.co/PTz2XemXbz

"A round of ministerial appointments for my friends, barman!" #SaxonwoldShebeen

I love South African humor in the face of bad times! Non-SAffas will not get #SaxonwoldShebeen but it is hilarious… except for Brian M.