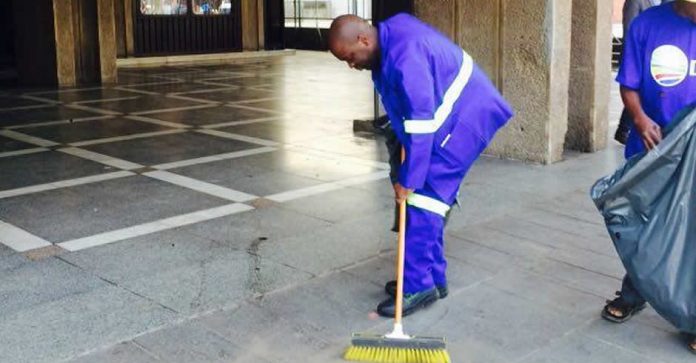 After the marches in Pretoria yesterday, and the revelations in the State Capture Report – two heroes have arisen:

Solly showed he’s not only cleaning up corruption in his city… but helping to clean up the trash that was left behind by protesters, who marched through the streets of Pretoria’s CBD yesterday. Leading by example…

Solly said: “I support the right to demonstrate & protest, but not destruction. Join me as we clean up our city.” Jonas almost deserves immediate Sainthood – or at least to be given a Bells – for allegedly turning down R600-million in cash (!), and a job offer to be Finance Minister… in exchange for extending favours to the Gupta family business. Many tweeters saluted him for refusing to be “Guptized”, and admitted they weren’t too sure they’d be able to turn down a whopping R600 mil just like that!

His decision prompted DA leader Mmusi Maimane’s wife, Natalie, to tweet: “If ever someone offers you copious amounts of money to forget your integrity, ask yourself [What Would Jonas Do]?” (Echoing the hashtag about the corruption-fighting Tanzanian President John Magafuli – #WhatWouldMagafuliDo.)

Others said: In a world full of Guptas, Zuma and Brian Molefes… be a Mcebisi Jonas.”

The Gupta Family has told the BBC that the meeting never took place.

The brave compiler of the 355-page State Capture Report has been celebrated as Most Valuable Player (MVP)… although she’s not a new hero. She’s an old favourite!

Update: After SA Finance Minister Pravin Gordhan’s ‘Thank You South Africa’ letter he should be on the Hero list too!

But not everyone’s a hero…

Eskom CEO Brian Molefe didn’t do so well in the State Capture Report – with revelations that he exchanged 58 calls with Ajay Gupta and made 19 visits to the family (“there’s a shebeen there”, he said, setting off a #SaxonwoldShebeen hashtag storm!), during a time the Gupta’s were trying to purchase a company that supplies Eskom.

Molefe broke down in tears this morning at an emotional press conference – where the happy news that Eskom is now delivering excess electricity, and celebrating almost 15 months of no load shedding – got less attention than Molefe’s tears and response to the Report.

Molefe did bravely say that he will take full responsibility as Eskom CEO and doesn’t believe the President or board should resign… but then he spoilt it by criticising MVP Madonsela for not giving him enough time to respond to the allegations.

Due to Mcebisi Jonas having a moral compass I will now never be able to answer a pub quiz question "How many bags do R600 mil fit into?" ?

After the #statecapture report, would you trust Brian Molefe & Eskom with the multi-billion dollar nuclear deals?

Dear God, please let #southafrica get @elonmusk #solarcity so @eskom can close down… At least we will have one reliable basic need #eskom

If #Eskom is captured best you believe that SAA, SABC, Transnet, Denel, PetroSA and the DBSA are too.

How many degrees would this equate to? pic.twitter.com/V1u7pnzV7G